Super Mario has been intrinsically linked with dinosaurs since Super Mario World in 1990. Wait, do Koopa Troopas count as dinosaurs? If so, then it goes back even further.

Either way, this mash-up of Super Mario Kart and a very angry-looking T-Rex is a perfect fit. The kicking up of the rubble under the cars gives the image a great sense of speed.

Our photographer, Mark Phillips, tipped his hat to Mitchel Wu for inspiration. I assume he’s talking about this image from Wu, which presents a very similar chase. Phillips did a nice job putting his own spin on the idea, though. 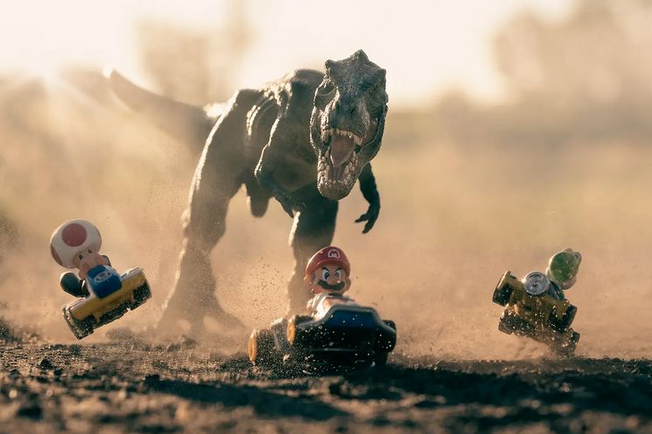 Apparently, Spidey is about to get some tech help from Norman Osborn, a.k.a. the Green Goblin. “So smart it makes you dumb” indeed…

Wells seems to add Kamala Khan, a.k.a. Ms. Marvel, to Peter’s supporting cast in this issue. I can’t bring myself to complain about that.

Romita gets to draw the Vulture here. While I’ve been pretty critical of his work in the past, he’s undeniably one of the more iconic Spidey artists of all time. So any time he gets to draw a classic villain like that, it’s a treat.

This isn’t the strongest issue to come out of this series. But five issues in, Guggenheim, Messina, and this team have sold me on their ability to produce a quality monthly title about Han and Chewie. That’s saying something, considering how underwhelmed I was at the beginning.

The friendship between Han and Chewie is the understated emotional core to this book. It’s a buddy action comedy. And that’s how it should be, really.

On the downside, we get a gratuitous appearance from a couple of familiar Mos Eisley Cantina characters. Lame.

This is one of the only superhero comics I’ve ever read to not only acknowledge that it’s a comic book, but to have our narrator (Stephanie) thank us for showing up again. Granted, this is the first issue of Batgirls I’ve picked up in awhile. Have they been doing that kind of thing the whole time? It’s…different.

KGBeast, the villain that shot Nightwing in the head and gave him amnesia, is back to being treated like a chump. Our heroes pretty much spank him here. Well, we knew his sudden serious turn wouldn’t last, didn’t we?

So what we have here are glimpses at two worlds made from the essences of John Stewart and Hawkgirl, respectively. Though what these two stories really amount to are brief character snapshots, i.e. a look at what makes each character tick. And from that standpoint, they both more or less succeed.

This issue also has a giant undead baby monster with bat wings. Because comics are bizarre and wonderful like that.

I’ve been digging on solid color background covers lately. I showed some love to a She-Hulk one last week, it’s Ant-Man #1 by Tom Reilly.

What I dig about this is that because of the bright primary colors, the one aspect of the cover that’s not brightly colored, Ant-Man’s helmet, draws the eye. That’s obviously appropriate, especially for a first issue. The awesome design of Ant-Man’s classic helmet only adds to the awesomeness. 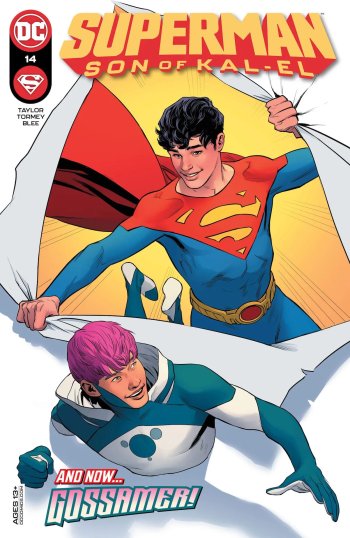 We see the Revolutionaries again in this issue. I’d forgotten that one of them is named T.N.Teen. That’s one of the most gloriously hokey superhero names I’ve ever heard.

I like the tense dynamic this series has created with the fictional nation of Gamorra. But I do wish that Gamorra’s president and our main villain, Henry Bendix, was a little more distinct. Right now he’s essentially a poor man’s Lex Luthor.

And I’m just now reading that Bendix is apparently a villain for the Midnighter. That’s cool. But my point still stands.

It’s never a bad time to pay tribute to Nichelle Nichols, and her iconic performances as Nyota Uhura on the original Star Trek series. But it’s particularly poignant to do so now, given her death on July 30.

I think my favorite aspect of this painting by Iain J. Clark is how Uhura’s earring and earpiece are framed in the shot. It highlights a unique sense of style, both from a character perspective and the futuristic universe the show is set in.

One of my favorite installments of “Rob Watches Star Trek” saw me educated on Nichols’ background coming into the show, and how Martin Luther King Jr. encouraged her to stay with Star Trek when she contemplated leaving the show.

RIP to a true legend.

***Think what you will about George Lucas, but in terms of Star Wars, it can all be traced back to him. That’s why I always find it so interesting to listen to him talk about it. His creative process, the reason certain decisions were made, and how these movies became the pop cultural staples they are. This space is dedicated to just that. This is “George Lucas on Star Wars.”***

The Scene: Luke, Leia, Han, and the Rebel Alliance arrive on the forest moon of Endor to disable the shield generator protecting the Death Star.

George Lucas Says: “The thing about Endor is I wanted an environment that was different from the other environments [in the previous movies]. But it needed to be a jungly kind of place with a lot of growth and green, which is the color of life. I wanted to give it a different look than Dagobah, which in essence had the same qualities of a swamp. Again, a cradle of life environment. Lots of life there. But I was beginning to run out of environments. Something that was unique. The only thing I could come up with was really giant sequoias, where the trees would be so big that it would give it a different look than what we’d seen before. The reason I was able to move on and do the [prequels] was because I was able to create digital environments. By the time we got down here to Return of the Jedi I had pretty much shot everything on Earth. *laughs*”

I Say: The whole “running out of environments” problem is something that’s very much evident in modern Star Wars stories. After awhile, all the different desert plants and jungle planets and snow planets start to blend together. Creators are having to work, or at least they should be working, hard to make settings that are as distinct and memorable as Tatooine, Hoth, and Endor are in the original trilogy.

This is one of the reasons I was so enamored with the planet Crait in The Last Jedi. The idea of the planet being one giant salt flat with red soil underneath is very creative, distinct, and memorable. It’s very Star Wars.

***I must confess that, despite being a huge Star Wars geek, I have yet to see the landmark Clone Wars animated show in its entirety. I’m aiming to rectify that to a large extent here, as we look at pivotal episodes of the series in, “The Essential Clone Wars.”

***New around here? Check out our Star Wars review archive!***

Savage Opress finds his brother Maul on Lotho Minor, which is basically a big junkyard planet. So are we to assume that big shaft Maul fell down in The Phantom Menace was a garbage chute? I didn’t look like one. Then again, I doubt George Lucas or anybody on the creative side of things thought Maul was going to survive that fall. Much less getting cut in half at the waist…

Maul is voiced by Sam Witwer. Longtime Star Wars fans will recognize him as the actor who provided both the voice and likeness for Starkiller in The Force Unleashed. He gives a great unhinged, guttural performance in this episode.

Interestingly enough, Witwer would once again provide Maul’s voice for Solo: A Star Wars Story in 2019. This despite Lucasfilm having access to Peter Serafinowicz, who originally voiced Maul in The Phantom Menace.

I like the idea of a big junk planet. Had they not developed Jakku as we saw it in The Force Awakens, I always thought a planet like Lotho Minor might be an interesting place for Rey to hail from.

I got a big kick out of the snake character Morley, voiced by Ben Diskin. Part of me wishes Opress and Maul had taken him with them when they left Lotho Minor. Granted, that makes no sense from a character standpoint, so in the end it’s probably better he died.

I appreciate the idea that Maul’s mind was damaged he lost to Obi-Wan and hasn’t recovered, even after more than a decade. It makes sense. To call what he went through a traumatic experience would be a gross understatement, don’t you think?