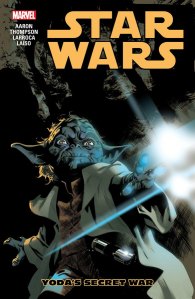 I’ve referred to the “Journal of Old Ben Kenobi” issues of Star Wars the highlight of the series thus far. I stand by that statement in terms of the one-off tales we got in issues #7, #15, and #20. But they went a little too far here. A five-issue story from the journal? Which features Yoda instead of Obi-Wan? I can understand the temptation to try it. But no. This falls in the “too much of a good thing” category.

As Luke Skywalker ponders a current predicament involving C-3PO being captured by the Empire, he opens Ben Kenobi’s journal and begins reading. Ben weaves a tale of a Jedi being called to a remote planet not on any star maps. A world inhabited only by children, who speak of a mysterious “stonepower.” Little does Luke know that the Jedi unraveling the mystery of this planet is Yoda, the former Grand Master of the Jedi Order who will soon continue his training in the ways of the Force.

Our artist for the main story is Salvador Larroca, whose work I’ve talked about in great detail previously. Long story short: His art is largely based on stills from the Star Wars movies, and it’s incredibly distracting. You want to be into the story, but the art keeps reminding you of scenes from Attack of the Clones, Revenge of the Sith, etc. It works for characters like Darth Vader or C-3PO, whose faces never change. But for just about everyone else it’s a problem. It’s a shame, because otherwise this is pretty good stuff. Edgar Delgado’s colors really capture the magic and wonder of the Star Wars Universe, especially once Yoda is sent on a question inside a mountain. And we get a big monster toward the end that’s are a lot of fun. 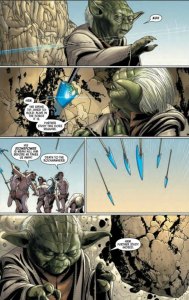 To his credit, Jason Aaron gets Yoda right. He’s not afraid to play with Yoda’s ironic size/power ratio. In issue #26, we see him walk into the lair of a bunch of space pirates to save a Force-sensitive child. As one might expect, they initially laugh him off. But he dispatches them, and gets a pretty good line in: “Something more precious than wealth have I brought you. … Wisdom.”

During our story, Yoda becomes the student of a boy named Garro, who teaches him about the stonepower. Seeing our little green friend as an apprentice instead of a master is always a fun role reversal. Star Wars fans obviously know that he instructs very young Jedi at the temple on Coruscant. So the fact that he’s on a planet full of child warriors is a great little twist. We get some cool visuals of Yoda and Garro with the glowing stones, and the blue light reflecting across the Jedi Master’s alien skin.

But despite what Yoda’s Secret War has going for it, it’s simply too long. They could have trimmed at least one issue off of this and been absolutely fine. In issue #29, we see Yoda face a rock monster that’s as tall as a building. That’s a great match-up, and a perfect illustration of the grand yet unassuming power this little guy possesses. In terms of a grand finale for a Yoda story, it’s tough to ask for more than that. But as we move through issue #29 and into #30, we jump back to present day and see Luke mix it up with an adult Garro. Thus, a story that was already starting to feel it’s length officially overstays its welcome. I understand the impulse to connect the story to Luke. But the reader already knows Yoda eventually trains him. It’s needless filler.

We also have to endure the narrative convenience that, in telling this story, Ben Kenobi never identifies Yoda by name. This is a continuity hoop Aaron has to jump through so Luke doesn’t recognize Yoda’s name in The Empire Strikes Back. While I appreciate the attention to continuity, it’s just a little too convenient for my taste. Logically, why wouldn’t Obi-Wan use Yoda’s name?

We also get the obligatory scene at the end with Yoda on Dagobah, talking about how Luke will be ready soon. Again, needless filler.

Also contained in this book is Star Wars Annual #2, in which our creative team shifts to Kelly Thompson and Emilio Laiso. We meet a character named Pash Lavane on the planet of Skorii-Lei, which has been devastated by the war between the Empire and the Rebellion. While she’s an immensely talented former engineer, with the physique of an Amazon to boot, Pash opts to stay out of the conflict. But when she rescues Princess Leia from a stormtrooper attack, she’s irrevocably drawn in. She may have no choice but to pick a side.

I appreciate the story Thompson tells about how one can’t always stay neutral when it comes to what’s happening in their world at large. But what I came away thinking about was the Pash character herself. The juxtaposition of a big, muscled up character who’s also technically savvy is intriguing. Pash is almost the She-Hulk of the Star Wars universe. Laiso strikes a lovely balance, as he makes her both facially expressive and imposing in stature. Between Doctor Aphra and Sana Solo, Marvel hasn’t been shy about creating new strong female characters. Pash makes that list as well, and it’s a shame we haven’t seen her since this issue.

I’ve drifted in and out of Marvel’s main Star Wars series since its debut. As big a Star Wars geek as I’ve always been, this title has had trouble holding my attention. Sadly, Yoda’s Secret War is my latest exit cue. Hopefully I get a reason to return sooner rather than later.