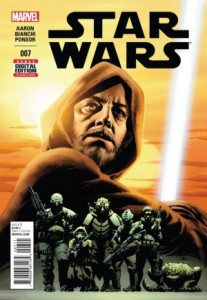 This issue covers some really interesting ground that Star Wars media rarely touches: Obi-Wan Kenobi’s exile on Tatooine, and the agony he faces when he’s forced to stop being a hero.

Set a few years after Revenge of the Sith, this issue sees Mos Eisley in the midst of the “Great Drought.” Thugs working for Jabba the Hutt are ravaging the city stealing precious water from moisture farmers. And Obi-Wan Kenobi, once a great Jedi Knight, is forced to stand by and do nothing, for fear of exposing his identity. In Kenobi’s own words: “As hard as it was to become a Jedi…it was even harder to stop being one.” 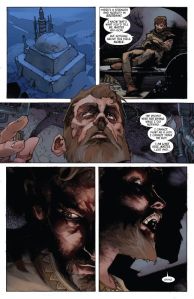 The contrast between how Simone Bianchi and John Cassaday draw Obi-Wan at this stage in his life is worth noting. On the cover, Cassaday goes the Alec Guinness route. The character doesn’t look like Guiness did in his pre-Star Wars career, but the art is clearly an attempt by Cassaday to de-age Guinness’ portrayal of the Kenobi character. Odd as it may sound, it works. As a longtime Star Wars fan, it evokes memories of how i imagined Obi-Wan might look in the prequels.

Bianchi, on the other hand, has a more neutral take. It doesn’t necessarily evoke Guinness or Ewan McGregor. But what it does evoke is great emotion. Bianchi makes great use of both shadow and expression to show us the character’s agony and loneliness, particularly on pages like the one above. There’s also fantastic panel with Obi-Wan simply sitting in the darkness of his hut, all alone. There’s a single text box that reads: “Ben the relic.”

From a writing perspective, my biggest complaint deals with a piece of Obi-Wan’s inner monologue early in the issue. It goes: “By the time of the great drought it had been years since I touched a lightsaber.” I don’t like that line. The overemphasis on lightsabers, as established in the prequels, has always bothered me. The idea that Obi-Wan references the lightsaber so readily when refering to his days as a Jedi harkens back to that, in my opinion. Thankfully, Aaron actually cancels out this problem by having Obi-Wan not actually use a lightsaber until the end of the book. This may be his best issue yet. 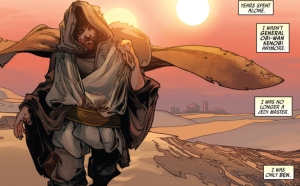 While the notion of Obi-Wan having a diary does have a bit of a hole in it, it’s a cool concept for a one-off every now and again. The “Ben Kenobi” era lasted about 18 years, and it’s very fertile ground for storytelling. Hopefully Aaron has at least a few ideas for future journal stories. Though with the recent revelation of Sana Solo, I doubt we’ll see another one for at least six months.