Star Wars #15 brings us a new chapter in the journal of Obi-Wan Kenobi. A year has passed since the events of Star Wars #7, and the former Jedi Master continues to look after young Luke Skywalker from afar. When Luke is in a minor flying accident, and his Uncle Owen grounds him (literally), Obi-Wan goes to great lengths to get Luke back in the air. Meanwhile, Jabba the Hutt continues to search for the one who foiled his plans during the drought. Obi-Wan may not stay hidden for long.

Star Wars fans may remember Mike Mayhew as the artist on The Star Wars, the comic book adaptation of one of George Lucas’ early drafts in the ’70s. Mayhew’s photorealistic style is beautiful. He made the characters, who were ultimately never meant to be seen, come to life as if we were somehow watching an alternate version of the original movie. The only major flaw I find in his work is that his characters can go over the top with their expressions, and venture into cartoony territory. We get some of that here. But it almost doesn’t matter, considering how gorgeous things are.

For instance, there’s a panel on page 5 that shows us Luke in the cockpit of his family’s T-16 Skyhopper. The sheer joy on his face, along with the superficial similarities to Mark Hamill in A New Hope, are enough to make you buy this kid as a young Luke Skywalker. As such, you’re immediately draw into the issue. I can’t understate how important this one panel is to the integrity of the entire story. You’re invested in him instantly. And as a bonus, we get a shot of a young Biggs Darklighter.

But just two pages later, things get cartoony in a shot of Owen getting angry with his nephew, and Luke crossing his arms in defiance. It’s an interesting trade off, but the upside makes it worthwhile.

Mayhew’s Obi-Wan Kenobi doesn’t look like Ewan McGregor or Alec Guinness, but still manages to evoke the charm of the former, and the wisdom of the latter. As such, he’s believable. As was the case last time, we only get one lightsaber shot, and it’s used toward the end. This is appreciated, not just because of creators relying too heavily on the lightsaber, but because this issue presents an ample opportunity to utilize it. At about the halfway point, we get a gorgeous two-page spread depicting a fight between Obi-Wan and a bunch of Tusken Raiders. If ever there was a good excuse to whip out the lightsaber, this is it. Instead, our creators show restraint, and show us Obi-Wan doesn’t need the lightsaber to be a formidable opponent. I wish we saw this kind of thing more often. It beats the hell out of the lightsaber frenzy we saw in issue #12. 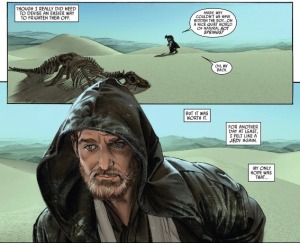 I’ve had my share of bones to pick with Jason Aaron’s choices in this series. But these Obi-Wan journal issues have been fantastic. There’s so much potential for great storytelling here. Aaron uses this issue to give us a firsthand look at the dynamic between Obi-Wan and Owen Lars. It’s a fine supplement to A New Hope, and is consistent with what we saw from both characters in the film.

As evidenced by how we close this issue, this won’t be the last time we open the journal. As for Mike Mayhew, here’s hoping he comes back to Star Wars again in the near future. He’s got an entire galaxy left to explore.