In 2011’s Catwoman #1 and #2, Judd Winick and Guillem March put together a scene where Batman and Catwoman have sex, complete with masks and costumes. We don’t see anything X-rated. But the climactic (no pun intended) page of issue #1 depicts what I think is supposed to be our heroes having achieved penetration. It was generally regarded as distasteful. An assessment I agree with.

But if for some reason you must show us Batman and Catwoman doing the nasty, this is how you do it.

Selina Kyle is about to go to face life in prison without parole for the murder of 237 people. (How/when did this happen, by the way? Is this something Tom King did for this story? I’m lost.) Batman is convinced she’s not guilty. But for whatever reason, Selina isn’t proclaiming her innocence. Now they have one last night together, and they’re spending it where they belong: The Gotham City rooftops.

So why is the sex in this issue different from what we saw in 2011? As much as I enjoy Judd Winick’s work, it was instantly clear that his scene was done for shock value. It was about the sex itself, rather than what the sex meant. Batman #13 is a romantic story that builds to the characters giving into their desires. As Selina puts it, it’s about what they want to do, as opposed to what they have to do.

While I still wouldn’t have actually shown us any of the act, this is actually my favorite Batman issue Tom King has done. I love stories that look at the Batman/Catwoman dynamic, and it’s satisfying to see these characters have a moment like this.

As we’ve frequently seen during King’s run, Batman and Catwoman call each other Bat and Cat. I like that. It adds a layer of familiarity, and almost intimacy to their relationship. It’s so simple that I’m surprised we haven’t seen it more often.

King also brings a bunch of C and D-list Batman villains along for the ride. The Clock King, Film Freak, Condiment King, and Kite Man are just a few of the names our heroes spend this special night with. An especially busy night, it would seem… 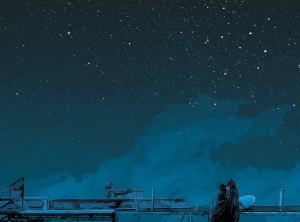 Mitch Gerads handles the pencils, inks, and colors. Almost everything in this issue is bathed in cool blues, which sets the tone beautifully. When we get to the intimacy between Bruce and Selina, Gerads uses those blue tones to highlight some of the scarring on Bruce’s body. That’s an interesting touch.

Early on we get a gorgeous two-page spread of a starry night sky. It’s tremendously fitting, given the importance of this night, and Selina’s talk about it shining like a diamond. Gerads also does some lovely work with Selina’s facial expressions, whether it’s her excitement at being on the rooftops, or her sorrow at having to go away.

Tom King’s Batman run has been a mixed bag. But his intentions have obviously been good, especially when it comes to Batman and Catwoman. Sex notwithstanding, this is the issue where that’s the most plainly seen. As such, it’s his best.