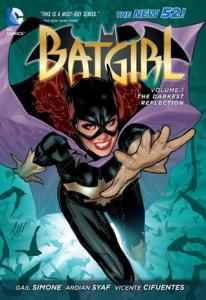 Yep, good ol’ Spoiler. She was Batgirl for just two short years before the New 52 apparently retconned her out of existence. *sigh* She was such a fun, flawed character to read. And then she was just…poof. Gone. Full disclosure: It’s really hard for me not to compare Batgirl: The Darkest Reflection to Bryan Q. Miller’s books with Stephanie, even though this book does feature the return of the iconic Batgirl, Barbara Gordon. But I’m going to try my best to be unbiased here.

At least I’m not the only one who feels a bit iffy about this book. Babs’ return as Batgirl via the New 52 reboot came at the expense of her run as Oracle, the DCU’s post-The Killing Joke wheelchair bound tech guru and queen of the information superhighway. Jill Pantozzi over at Newsarama wrote an awesome piece about this change that I won’t even attempt to top. But in short, a lot of fans feel that giving Barbara her legs back took away an extremely compelling, and at times inspirational aspect of her character. 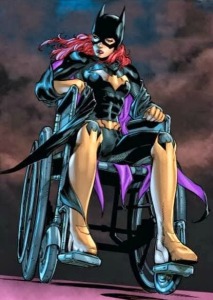 The Darkest Reflection realizes what a radical and controversial character shift this is, and as such we spend most of the book dealing with it. Our first villain is Mirror, a character who sees miracles as God’s mistakes, and sets out correct them. We also meet Gretel, a mind control villainess who Barbara sees a bit of herself in. All the while, our heroine must come to terms with the fact that she can walk again, and what it means for her as both Barbara and Batgirl. Then later, amidst all of this, the last person in the world Barbara expected to see again comes back into her life!

The book explains Barbara’s return to her feet with a couple of lines about a clinic in South Africa that performed a “neural replacement” operation on her. I suppose this is as good an explanation as any. The less we spend on the pseudoscience of Barbara getting her legs back, the better. I imagine it’s more comfortable for people that way….

From a writing standpoint this story is tricky. Barbara is dealing with a change most people can’t relate to. As a reader it’s sometimes tough to project yourself on to her. But there’s no way they could have gotten away with not telling this story. DC wanted to meet Oracle fans halfway by keeping her in continuity, and they had to have a transition story of sorts. In addition to setting up a new status quo for Barbara and planting some seeds for future stories, that’s basically what this book is. In that sense, the book does its job. We see Barbara’s survivor’s guilt, we see her uncertainty in the field, and we see Batman and Nightwing work with her again. It’s not nearly as fun as Gail Simone’s work on Birds of Prey, or any of the stuff Stephanie Brown did as Batgirl (sorry!), but it’s what we need to see to get us to the next part of Barbara’s story.

Issue #3, which examines Barbara’s relationship with Dick Grayson/Nightwing, sees Dick ask Barbara a pretty heavy question: “Come on, Babs, you’re recovering…I’ve seen the records, Barbara. Do you want to be back in that wheelchair? Is that what this is all about?” Commissioner Gordon also brings up the question of whether Barbara is doing too much too soon, and he (presumably) doesn’t even know about the her superhero career. The book tells us that Barbara learned about the neural replacement procedure about a year before these events play out. Which means she’s been back on her feet less than a year. Even when you take her previous experience into account, that makes for a pretty quick return to swinging from rooftops, trading blows with homicidal maniacs and jumping on to speeding trains. I’m wondering if placing more emphasis on Babs’ quick return to action might have made it a little easier for readers to identify with her plight. Most people know how it feels to sit on the sidelines due to sickness or injury, and want to get back in the game as soon as possible. Seeing Barbara in a position like that, albeit in an exaggerated manner, might have helped play up the returning underdog angle a little better.

That said, Mirror is a great villain for Barbara in this book. His M.O. about miracles being mistakes of the Divine make him the perfect opponent for the returning Batgirl. He’s got a really great look to him as well. His hooded costume mixed with the mirrors give him a Grim Reaper vibe that works really well. Since the reboot, DC has made a point to put their heroes up against all new villains, and Mirror was one of the best ones they came up with. Kudos to Ardian Syaf for making him, and the rest of the book look great.

The second villain, Gretel, is essentially a throwaway character who got her mind control powers in a way that’s never really explained. I understand why she’s there, but she’s obviously filler.

I’m not convinced that The Darkest Reflection is ultimately as good as it could have been. Gail Simone is certainly no stranger to Barbara, but I think she handled the character much better as part of a group dynamic in Birds of Prey. Now that Barbara’s return is out of the way, hopefully we can look forward to bigger and better things.

One thought on “A Batgirl: The Darkest Reflection Review – Walking Tall”