Judging from his first appearance, Geoff Johns, Doug Mahnke and DC Comics are about a decade too late with the story of Simon Baz, the first Arab American Green Lantern.

The stuff they show us as they introduce this new hero is plucked straight from some of the more scandalous and controversial headlines of the past decade, and it has all the subtlety of a wrecking ball. Case in point: On the very first page we see the twin towers up in smoke. On the second, we quickly cut between Simon washing graffiti off a mosque wall, then he and his sister being harassed and beat up, then we see him being racially profiled by security guards.

Since being laid off from his auto factory job, Simon has turned to stealing cars to make ends meet. But one night, he gets more than he bargained for when he finds a time bomb in his latest acquisition. The cops take him in for interrogation, and we proceed with a scene that includes the line: “I’m a car thief, not a terrorist!” Then, as they prepare to WATERBOARD this poor sap, a Green Lantern ring (presumably the one lost by either Hal Jordan or Sinestro in last week’s Green Lantern Annual #1) bursts in and saves him.

I don’t think most fans have a problem with superhero comics being made a bit more diverse, and of the two major companies, DC is certainly the one that needs it more. Johns himself even said in a recent interview that there was no Muslim representation in the DC Universe. Considering this is the year 2012, that’s a pretty glaring omission. So I appreciate what they’re trying to do, here. And they story that they’re telling would be great…if it were being told 10 years ago. But in 2012 it feels like a pretty safe story that’s being told more for publicity’s sake. Does this kind of racism still occur today? Absolutely. But there’s a certain cheap quality to hitting us with 9/11 imagery, waterboarding, etc. That’s not to say that it doesn’t do what it’s designed to do. Johns and Mahnke make Simon Baz into a sympathetic character who stands up for what he believes in regardless of the cost to himself. Thus, he’s a perfect candidate to wield a Green Lantern ring. I just wish it wasn’t so obvious that, like Alan Scott being made into a gay character, this is DC changing something and then shouting: “Look at us! Look what we did! We’re diverse!!!” 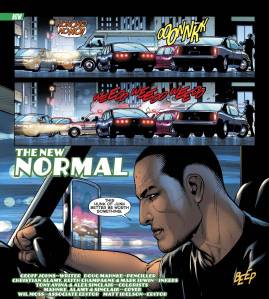 One thing I find interesting is the number of parallels between Simon Baz’s first appearance, and John Stewart’s first appearance from back in the early ’70s, when the civil rights movement was still in full swing. This was also at the height of the groundbreaking work being done by Denny O’Neil and Neal Adams. Back then John was far from the straight-laced military man we know today. Like in Green Lantern #0, we see our new hero face corrupt cops. John stops a racist officer from harassing a pair of black men playing dominoes on the sidewalk. He then opens Hal Jordan’s eyes by taking down a racist senator. These are the same sorts of themes we see present in Green Lantern #0, except we don’t have Hal there to have his eyes opened as he sees the world through this new hero’s eyes (though perhaps we will, given time). Corrupt peacekeepers, racist government officials, it’s all still there. It’s presented a bit differently, and perhaps it’s a bit more subdued than it was in the ’70s. But John and Simon would have a lot to talk about.

I suppose the DC fan in me would have liked to have seen the company be a bit more gutsy with this kind of material. I don’t doubt that this kind of thing still happens, but the execution feels dated and overly sensationalized. Had this been printed during the Bush administration, we might have had something a bit more special. Still, it’s nice to see the publisher making an effort to diversify things.

Image 1 from fanboymorphine.blogspot.com. Image 2 from gamespot.com.