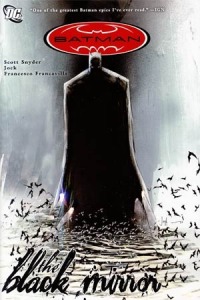 One of the best things a Batman writer can do is establish Gotham City as a character in and of itself. Scott Snyder does this as well as any writer I’ve ever seen, particularly when he’s teamed with Jock in Batman: The Black Mirror.

The book collects two stories. In the title story, a series of murders leads Batman (Dick Grayson) to investigate an underground auction house for items used by Gotham City rogues. The pressing question being, will Dick escape the auction house alive? At the same time, Commissioner Gordon’s son James Jr. returns to Gotham. As it turns out, James has something of a violent history. As Barbara Gordon (Oracle) panics about his return, the Commissioner wonders if his son deserves another chance, or if he has something sinister in mind for the city. In the second story, “Hungry City,” somebody puts a dead killer whale in the middle of a bank lobby. That’s right, an honest to God killer whale! The case leads Dick Grayson into contact with the daughter of Tony Zucco, the man who murdered his parents. How far has the apple fallen from the Zucco family tree? Batman’s set to find out. 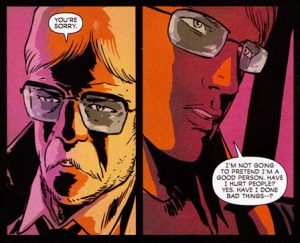 In this story, and all Snyder’s Batman stories for that matter, the city has a very distinct feel to it. Snyder, Jock and Francavilla give it an aura that makes you believe characters as outrageous as these could exist there. Very few creative teams have been able to pull that off so effectively.

Fans have known for years now that Jim Gordon has a son. We’ve seen him as a child in various early-years stories like Batman: Year One. Apparently he left Gotham with Jim Gordon’s first wife after their divorce. I had always been interested to see what happened to him. From a creative standpoint, part of me was a bit disappointed to see the character given such a dark twist. Between his divorce, having his daughter paralyzed and his wife murdered, not to mention having the unenviable task of maintaining some degree of order in the most chaotic city in the world, it would have been nice to see something actually go Gordon’s way for once. But alas, like Batman he seems to be cursed. Snyder does a tremendous job keeping you wondering whether James is actually a bad guy. Francesco Francavilla, who handles the pencils for all the Gordon-centered content, does great work too. 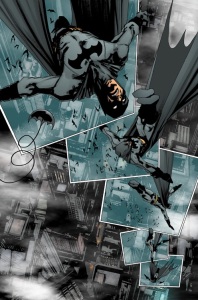 What I also enjoyed about Snyder’s work was that he makes a point to have his run be just as much about Dick Grayson as it is about Batman. Whether it’s Dick reminiscing about how his father viewed Gotham while in the circus, his feelings toward the daughter of the man who murdered his parents, or how he feels soaring over  rooftops, Snyder, Jock and Francavilla make Dick look very natural in the Batman role, as opposed to someone who’s simply filling in. That’s something that even more renowned creative teams have had trouble doing.

The quality of Snyder’s work in the world of Batman continues to rise. But this is where it all started. Clearly he’s got a knack for working with these characters, and if he keeps it up he can establish himself as one of the better Batman writers of this era.

Image 1 from goodreads.com. Image 2 from wednesdayshaul.com.