Considering Wilson Fisk used to be Marvel’s Kingpin of crime, he’s a pretty nice guy here. While you can use a lot of words to describe this character, “nice” has rarely been one of them.

But if you ask Wilson, he’s a man who has paid his debt to society, and is on a new path. Journalist Sarah Dewey is, to say the least, skeptical. Fisk nevertheless chooses her to write his biography, and spends most of the issue trying to win her over. But as one might suspect, things aren’t quite what they seem…

Take a moment and type “Kingpin, Marvel” into Google Image. What’s what thing he’s not doing in any of those pics? Smiling. The Kingpin doesn’t smile. At least not in a genuine, happy sort of way. But he does in Kingpin #1, and it catches you off guard. You’re expecting a grim and sadistic brute. Instead we get this warm and gentle teddy bear. 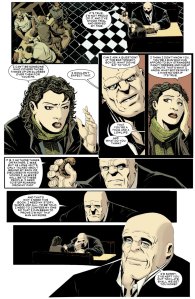 Our “gateway” character is Sarah, who Fisk seems to have an interest in based on her writing. There’s a purity to that which is almost heartbreaking. He’s also unwaveringly kind, even if that kindness is rather awkward at times. It’s a stark contrast to this cynical, down-on-her-luck journalist who, despite the quality of her work, is struggling to keep her head above water. You end up hoping this warmth he’s showing to her is sincere, and not some sort of ploy.

If your Google machine is still open, type in the name Wayne Dyer. He was a self-help author and motivational speaker who often appeared on PBS. At times, be Kingpin that Ben Torres gives us looks quite a bit like Dyer. Case in point, the bottom image on the page at right. Maybe that’s why he’s so happy. He read Change Your Thoughts, Change Your Life.

Torres handles the pencils and inks for this issue. I’m not very familiar with his work. But he’s a tremendous fit for this part of the Marvel Universe. As he goes in heavy on the inks, you can see some Frank Miller on this pages, and a little bit of John Romita Jr. There’s even some Eduardo Risso. The mood is precisely what it should be: This is a place where hope is in short supply. We’re now finding hope in the most unlikely of individuals. And even that is likely smoke and mirrors.

I can’t say I have a tremendous desire to come back for more Kingpin. Let’s be honest: We know how this story ends. The only real question is whether Sarah Dewey makes it out okay. But as for Fisk, it’s only a matter of time before the Kingpin is back on his throne.