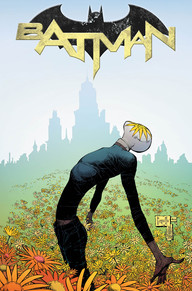 ***WARNING: Spoilers lay ahead for Batman #43, as well as the Batman: Endgame storyline.***

Amnesia, huh? Could’ve been worse, I suppose. After all, he was dead.

Wayne Industries developed much of the tech in Jim Gordon’s Batsuit. So when Gordon decides he wants to get some extra suit time in without being monitored, he comes to Bruce Wayne (I mean, why else would he seek out Bruce?). But Bruce, who is mysteriously alive despite the events of Endgame, refuses. This leaves Gordon to take on a new villain, Mr. Bloom. But Gordon is woefully unprepared to face Bloom. And he’s not the only one…

The major development to come out of this issue is that we finally learn how and why Bruce is alive, and why he isn’t Batman any longer. We’re told that following his death in Batman #40, Dionesium (a magic chemical Snyder created during Endgame) seeped into his fractured skull, healing him, but leaving him without the memory of his parents’ death, his training, or his time as Batman. Thus, Bruce no longer has a “shadow” over his life. And he no longer wishes to. He instead chooses to work with his old flame Julie Madison, helping underprivileged youth in the city. 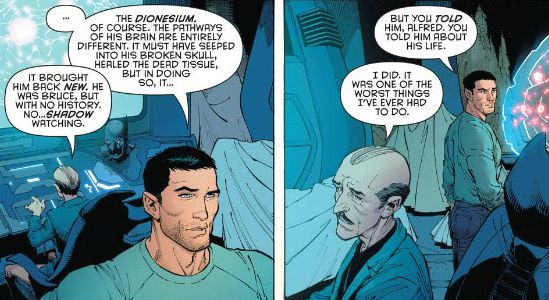 Oddly enough, we learn this via Alfred explaining it to a visiting Clark Kent. Clark is a fine choice for this scene, but it does leave one wondering what Barbara Gordon, or perhaps Damian, might have been like in that scene.

It’s also worth nothing that no mention is made of The Joker during the exposition of how Bruce came back. So it’s likely that he was effected by the Dionesium as well, and as such will forget Bruce was Batman. They also present a way to reintroduce the old memories back into Bruce’s mind. So within the span of one issue, Snyder and Capullo have explained how Bruce survived, how The Joker likely survived, set up an interesting journey for Bruce to go on, and given us a way to bring the old Batman back. All this while introducing Mr. Bloom. Not too bad, gentlemen. Not bad at all. 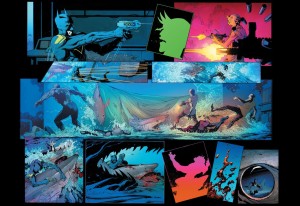 As if that weren’t enough, we also get a pretty cool action sequence in this book, in which Gordon gets in a firefight with a group of gangsters, and in the process a shark tank is shattered. In true cop fashion, Gordon goes for cover, and winds up ducking behind one of the “beached” skarks, who happens to have sunk his teeth into one of the gangsters. It’s an extremely bizarre visual to see Batman firing a projectile weapon at criminals from behind a shark. But it works. And much credit goes to inker Danny Miki and colorist FCO Placencia for the tremendous contrast between shadow and bright color. As shown above, we’re able to really feel the impact of some of those batarangs. Particularly one that hits the guy in the damn eyeball…

The verdict is still out on our villain, Mr. Bloom. He’s got sort of a hybrid Poison Ivy/Scarecrow thing going on. I do like the idea of doling out seeds that grant the recipient powers. Considering we now have a big mecha Batman, he’ll likely prove to be a good physical match for Batman. I also love the cover, here. It’s almost a twisted callback to the poppy scene in The Wizard of Oz.

This issue also has some really solid dialogue, and a few good one-liners…

As a whole, this issue reminded me of a post I came by not too long ago. It was titled: “Pixar’s 22 Rules of Storytelling.” Gordon’s entire quest to be Batman seems to fall under rule #1…

The shark thing is just a coincidence, I swear.

This whole set up with Gordon being Batman and the police trying to have their own Dark Knight is obviously an idea that’s destined to fall apart in the long run. But the cool thing about these past few issues is that Snyder, Capullo, and the creative team don’t hide from that. They know it’s a bad idea. But that doesn’t stop readers from rooting for Gordon, because he’s trying his hardest to make it work, and to be the best Batman he can be.

Perhaps this rule about admiring a character for trying rather than for their successes describes why we all love Jim Gordon in the first place. He’s always been woefully unequipped to clean up Gotham. But he never stops trying. Despite having a big ass robot suit at his disposal, in the big picture, Gordon is an underdog. This juxtaposition is a sign of really compelling writing.