By Rob Siebert
Full-Sized. Not Plastic.

We don’t see the X-Men as often as we should here at PI. So lately I’ve been looking for ways to spotlight them. Low and behold, here they are in “Toy Chest Theater.” And oh yes, we’ve got a packed production today.

In combing through the toy photography community, I’ve seen a lot of Wolverine. Cyclops too, but a lot of Wolverine. So naturally, most of what you’ll see today will include him. But I’ve also worked hard to move beyond Wolvie. (Lord knows he’s hurting for publicity.) Case in point…

I haven’t spotlighted a lot of (if any) photos with captions. But in this image from @satoshi_k, the caption is what ties it all together. We’ve got Cable walking with a purpose, locked, loaded, and ready to go. We’ve got snow, which might suggest a nuclear winter. Or on the other hand, simply winter. Those heavy doors leave it a little ambiguous as to when this takes place.

Yes, the caption is “Change the future.” But is he departing from the future to the past, or is he already in the past?

Either way, this shot wasn’t cheap. The figure, made by Mezco Toyz costs $100. Some of us suffer for our art. Sometimes our wallets suffer as well.

But hold on, we’re not done with @satoshi_k yet…

Sweet fancy Moses! Once again, these figures from MAFEX cost almost $100 each. But @satoshi_k damn sure got his money’s worth on this one.

I love the shots that make you ask, “How the hell did they do that?” My intellectual brain tells me, “Of course that’s probably not real fire.” But the image looks so damn convincing that it plants that seed of doubt.

That one element that puts it over the top? The Wolverine pose. The illusion of momentum is absolutely tremendous.

Cyclops is such a rich, complex, and often bad-ass character. So much more than a lot of casual fans give him credit for. @Tyo nugroh0 illustrates that beautifully here. What’s interesting here is that the image isn’t necessarily about the figure itself. It’s about the setting it’s placed in.

Here we have Magneto doing the thing people always expect Magneto to do. Not just to Wolverine, but Iron Man. That’s not quite how it works. But it’s happening in this scene from @creaptic using Marvel Legends figures. And to his credit, he makes it look good.

A future edition of Toy Chest Theater is going to focus on…well, focus. I have a lot of respect for photographers who create a scene with layers. Not only that, but they know which layer is the most important. We know what Magneto looks like. What’s important is what he’s doing. What’s important is that Wolverine is in agony. That’s what we need to see.

Jeremy, a.k.a. @figurephotoworks, brings us this next shot that I really love. 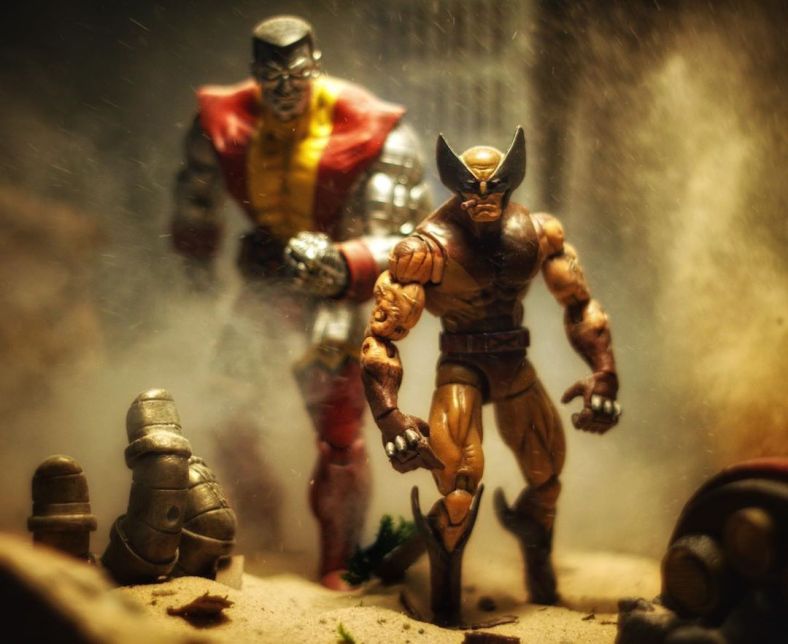 Along the same lines as what Tyo nugroh0 gave us, here we have Wolverine and Colossus among the wreckage of what I assume was a fight with Sentinels. But to give it that special look and feel, Jeremy (a.k.a. @figurephotoworks) used “sand, a drain blaster, and a smoke machine.” The result is absolutely gorgeous.

I also love that he chose these particular Marvel Legends figures. Colossus’ normally glimmering skin covered in sand gives us a sense of just how dense that cloud behind them is. Wolverine’s brown and yellow suit is not only a great fit for the image, but a personal favorite of mine.

For some reason, the toy photography community seems to love pitting Wolverine against Omega Red… 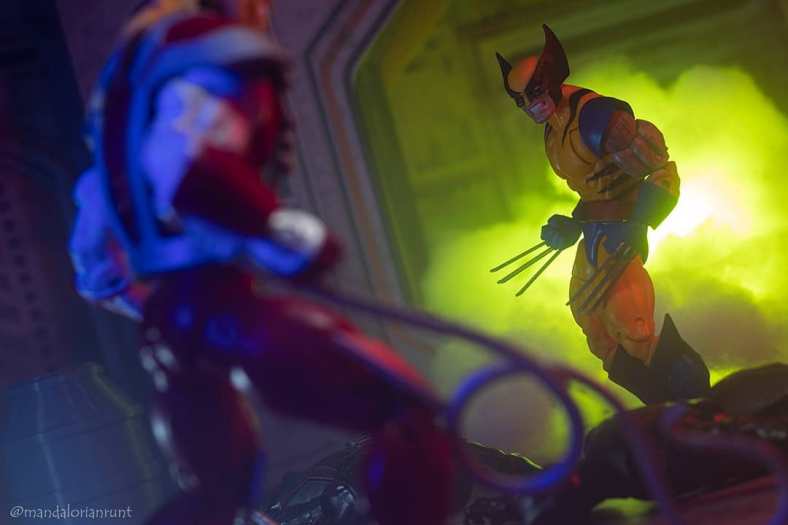 This first one from Stephen (@mandalorianrunt) not only has one of those great X-Men/comic book-ish environments, but it’s got that awesome yellowish green lighting in the background.

If I’m not mistaken, based on some behind-the-scenes photos Stephen put up with this, that smoke behind Wolvie is actually cotton. You’d never know it, though. You really never even consider the smoke. That’s one of the ways you know you’ve got a great image. Everything at least appears to blend together seamlessly. 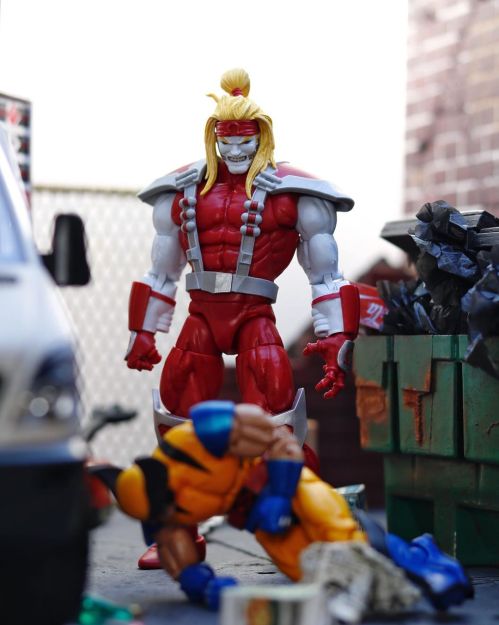 Wolverine vs. Sabretooth. One of the big rivalries in all of comics. It terms of sheer disdain for the other person, it’s probably up there with Superman vs. Lex Luthor or Batman vs. the Joker. Here we have a really nice shot of Logan pinning Creed down in a wooded setting. And here we have something else that’s fairly rare in toy photography, at least as far as I’m concerned: Blood.

@BrinquedosNaReal could easily have used ketchup, food coloring, or something like that. But he went the plastic route. I’m sure that wasn’t originally intended to be blood. But it works as blood, as it makes the image appear like it was taken with a high-speed camera. Like some poor photographer just happened to be standing there as these two rabid animals are slicing each other’s guts out.