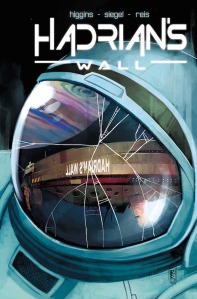 Kyle Higgins and Rod Reis had a hell of a showing in last month’s Mighty Morphin Power Rangers Annual #1. In Hadrian’s Wall, they’re still firmly planted in the space age. We don’t have any swords or witches, but there’s enough drama for everybody!

It’s 2085, and Simon Moore is a divorced detective who’s addicted to painkillers. When his ex-wife’s husband suddenly dies in space, Simon is brought aboard the vessel Hadrian’s Wall for the investigation. But neither the crew nor his ex-wife Annabelle are particularly welcoming. Simon is about to face potentially insurmountable obstacles, both from within the ship and within himself.

What we have here is, in Higgins’ words, an “’80s sci-fi murder mystery,” which also happens to be a break-up story.  It’s not entirely clear, but it seems like Annabelle cheated on Simon for her now-dead husband Marshall. We even learn that at some point Marshall shot Simon four times. What’s more, Annabelle is openly hostile to Simon. Naturally, this should cast him as our sympathetic hero.

Except he isn’t. Annabelle is no prize, but Simon isn’t much better. He comes off very bitter, and almost as mean as his ex-wife. We’ve seen few redeeming qualities from him, outside  of him being a detective. Even in that case, it’s established he’s largely taken this case for a big payday. The case can obviously be made that this is only the first in an eight issue story. But we don’t have the entire story in our hands yet. A more likable lead would have given us that much more incentive to come back and buy that next chapter.

In many ways, the real star of this book is Rod Reis. His color palette sets a dreary and bleak tone, which very much fits with how Simon sees the world. The only exception is a one-page flashback where we see Simon and Annabelle together. Both of them are smiling, they’re bathed in the pinkish orange glow of a sunset. It almost looks like a different book. But in the grim aura of present day, you can very much believe in outer space homicide.  There’s also a gorgeous two-page spread of Hadrian’s Wall.

We have a hell of an opening page (shown above). It’s got a nice Gravity vibe to it, with the camera pulling away from Marshall, revealing him floating in the emptiness of space. And dear God, his helmet is cracking. That lower left panel makes my stomach tighten. Look at Marshall’s face, and then look at all the darkness around him in the very next panel. This isn’t even a horror comic, per se. But THAT is comic book horror.

Question: Is the design for Annabelle based on WWE’s Eva Marie? Because this girl is basically Eva Marie, with the red stuff swapped out for green. I’m not complaining. As a wrestling fan, it’s cool. It’s certainly a distinct look.

Hadrian’s Wall is a toss-up for me at this point. The concept is a lot of fun, and it’s very well executed. But I need more to latch on to from a human perspective. You wouldn’t think that would be the case in a break-up story. But for many, the art alone will be worth the price of admission.