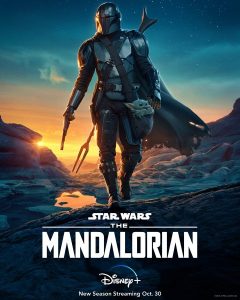 This is the first episode of the season not written by Jon Favreau. Dave Filoni, who was integral in the creation and development of Star Wars: The Clone Wars and Star Wars: Rebels, serves as both the writer and director. That’s fitting, of course, given who makes her live-action debut here.

I’ve said it before, I’ll say it again: There’s a certain amount of injustice in the fact that Ashley Eckstein isn’t playing Ahsoka. Nothing against Rosario Dawson. She does a fine job here. But Eckstein deserved to take a crack at the role.

A question that’s been asked, but bears repeating: Why doesn’t Mando know more about the Jedi? Not just because his people were at war with them at one point, but because at this point in the timeline the Jedi haven’t been gone that long. The Empire

So beskar armor can block lightsabers. That’s convenient. Not necessarily a bad thing, though.

So Baby Yoda has a name: Grogu. Not that it makes much difference in terms of the “Baby Yoda” nickname. That thing is sticking.

The affection shown between Grogu and Mando in this episode is heart-warming. Obviously, we knew they had become close. But things like Mando cheering Grogu on during the Force exercise with Ahsoka reinforce that in a really impactful way. In that moment they literally feel like father and son.

We pretty much knew Filoni would throw in some fan-service lines, right? That’s really all those references to Yoda and Anakin were.

Once again the eastern, samurai-esque influence on The Mandalorian is quite evident here. Perhaps most notably in the look of the village on Corvus. Much like “Sanctuary,” it feels a lot like something you’d see from Akira Kurosawa

I can’t say I was incredibly surprised to hear Grand Admiral Thrawn’s name mentioned near the end of the show. He’s a loose end in the franchise, and a character they continue to use via Timothy Zahn’s Thrawn novels. So it makes all the sense in the world to bring him in as a villain for Mando. I’d love to see him as early as next season.

So Ahsoka sends them to an old Jedi temple, with the idea that maybe a Jedi will sense Grogu. Naturally, this brings up questions about Ahsoka and Luke Skywalker, and what they know about each other. Canon buffs know that at some point, Luke knew about Ahsoka. And given his strength in the Force, one would think Ahsoka knew about Luke (and possibly Leia). But to my knowledge, there’s never been a story in which they meet. That seems like a book, or even an animated movie that’s just begging to be written.

One thought on “Rob Watches The Mandalorian: Ahsoka Arrives”