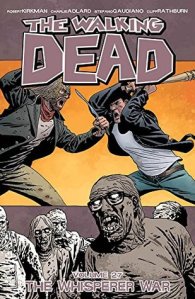 The biggest thing I took away from The Whisperer War? That the Saviors were a tough act to follow.

That’s not to say they aren’t interesting in their own way. It’s hard to not be interested in a group that wears zombie flesh and rejects the idea of civilization. But the Whisperers are to The Walking Dead what Bane was to Christopher Nolan’s Batman movies. On his own merits, Bane was pretty damn evil in The Dark Knight Rises. But the Joker left such an impression on you in The Dark Knight that anyone else paled in comparison. Like the Joker, Negan made a very violent, vile, and personal impact on our heroes. But he was also uniquely charming. That’s why in many ways he’s become the star of the book.

More than two years after their war with the Saviors, Rick Grimes and our network of survivors are once again prepared to fight. But this time the enemy is very different, and the heroes have far more resources. But the Whisperers have something at their disposal  that could destroy everything Rick and the survivors have built: An army of the dead. 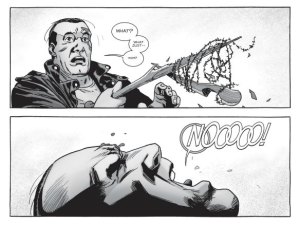 The most interesting aspect of this series since the time jump in issue #127 has been Negan’s quest for redemption. But we aren’t exactly sure if that’s his true motivation, or if he’s playing some kind of long game. Either way, we’ve gotten to see him from a few different perspectives. First as a prisoner, then an unlikely confidant for Rick, now a sort of comrade-in-arms.

Negan’s famous baseball bat, Lucille, is unexpectedly shattered in this book. It’s actually sad, in a silly sort of way. More endearing is the burial and eulogy he gives it in issue #162. As many of us know, it’s not really about a damn baseball bat. But seeing his personification of it come full circle is a neat little window into his heart.

On the subject of matters of the heart, Maggie has a great character moment. One of the newer characters, Dante, has been crushing on her for quite awhile. In this book he puts his cards on the table, but Maggie says she’ll only ever love Glenn. When he presses her on being alone for the rest of her life, she simply says: “I’m happy when I think of him. I’m not asking you to understand. I don’t care if it doesn’t make sense to you.” I love that. It’s unconventional, and it’s a great moment for fans who miss that relationship. 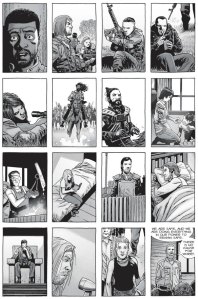 Artistically, the strongest issue is #162. Penciller Charlie Adlard, inker Stefano Gaudiano, and gray tone artist Cliff Rathburn give us a gorgeous two-page spread of the largest herd of walkers we’ve ever seen. But I also love the faint smile Adlard draws on Negan when he apologizes to Lucille for naming “a stupid f***ing baseball bat after you.” He also gives Rick a tremendous terrified look when he realizes the big hoard is coming.

The fire sequence in Issue #161 is also particularly strong. After an attack by the Whisperers, the Hilltop is burning. We see Carl nearly die after rushing back into a burning building. And for pure badassery, it’s tough to top Lydia kicking a zombie as the flames roar behind them.

The Walking Dead also shifts to a 16-panel grid for this volume (shown right), giving the book a much more dense feel at times. If you’re not used to seeing this layout, it can take some time to get used to. I once heard Gene Ha say it’s best to read a comic book twice, once for the story, and a second time just to absorb the art. That’s certainly the case here. I can’t imagine how much extra work this creates for Adlard, Gaudiano, and Rathburn. The books don’t suffer for the change, though. That’a a testament to the talent at work here.

I don’t know whether Negan is playing the long game. Be we know one person who is: Robert Kirkman. The Whisperer War is clearly a smaller piece of a larger puzzle he and this crew have been assembling since issue #127. Thus far it’s not quite as thrilling as what’s come before. But you can’t always judge an image until you can see the whole thing.