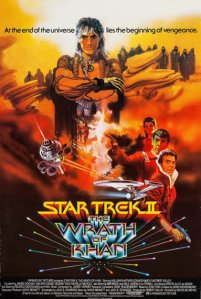 This is it. The big one. The one everybody loves. The Star Trek franchise’s equivalent to The Empire Strikes Back, The Godfather Part II, etc. Not just a good Star Trek movie, but the great Star Trek movie! Right?

Yep. I mean, pretty much.

More than a decade after we last saw Kirk and the Enterprise crew, a starship seeks to test a device that can transform dead worlds into habitable ones. But in searching for an appropriate world, they mistakenly discovered the genetically-engineered mastermind Khan Noonien Singh. Fifteen years prior, Kirk banished Khan and his people to the planet Ceti Alpha V, not knowing the planet would soon be devastated by the explosion of a neighboring planet. Now, Khan has a chance to exact revenge on his sworn enemy. That revenge will ultimately result in tragedy for Kirk and his friends aboard the Enterprise.

First and foremost, this movie justifies my disdain for Chekov. He’s one of the crewman that discovers Khan on Ceti Alpha V, and ultimately leads him straight to Kirk. So this whole thing? Yeah, I’m just gonna say it’s Chekov’s fault…

While we’re on the subject, I have no problem with the fact that Khan recognizes Chekov, despite the character not appearing in “Space Seed.” It’s reasonable to assume that Chekov was on the Enterprise during the incident with Khan. It’s a harmless continuity hiccup.

For my money, The Wrath of Khan adds some contrivances to the Star Trek chronology. Going by Wikipedia’s version of the timeline, the events of “Space Seed” take place in (approximately) the year 2266. This movie takes place about 15 years later in 2285. Star Trek: The Motion Picture, meanwhile, takes place in roughly 2273. So we’ve got a 12 year gap between this movie and the last one. But the characters are essentially right where we left them. Bones, Scotty, Uhura, and Sulu are all seemingly doing the exact same jobs they were doing more than a decade ago, on the exact same ship. Spock is still there too, though he’s at least been promoted to captain. Even Kirk is still a Starfleet admiral. Chekov, meanwhile, is a commander assigned to another ship.

So you’re telling me that in 12 years, the person who had the most career momentum was Chekov?!? Gimme a break! These people would have all gone on to different things! Some of them would likely be captaining their own ships by this point. By setting itself 15 years after “Space Seed,” The Wrath of Khan freezes them in time needlessly. Why not just set this movie a few years after The Motion Picture? That 15-year time jump doesn’t even factor into the story.

Making Khan the villain for Star Trek II was a stroke of genius. The movie acts as a sequel to a then-15-year-old episode. But at the same time, his backstory isn’t all that complicated. You can come into the film with no knowledge of “Space Seed” and still be okay. It struck a pivotal middle-ground between pleasing the fans and appealing to casual moviegoers. That’s something franchise films still struggle with to this day, but The Wrath of Khan nailed it almost 40 years ago.

The movie wants you to believe there’s this blood feud between Kirk and Khan. Like they’re arch rivals. I don’t necessarily buy that. But I do buy that Khan hates Kirk with every fiber of his being. From an intrigue standpoint, that’s sufficient to meet the story’s needs.

I would have bought the rivalry, however, if Khan had been the one to kill Spock. The climactic moment of the movie comes when Spock sacrifices himself to save the ship, leading to a tearful goodbye with Kirk. But he dies fixing the ship’s warp drive, which lacks a certain punch. You want to get heat for your villain? Have him kill the franchise’s most beloved character. That’ll do it.

Spock did get an awesome death scene, though. Kind of a shame they went and undid it with the next movie.

I don’t know if I’d call The Wrath of Khan a masterpiece. But it earns it’s place as probably the best Star Trek movie. This, I think, is what people were expecting from Star Trek: The Motion Picture. Something big and epic that advances the story and the characters, while still staying true to Star Trek.

I just hope it isn’t all downhill from here…

For more “Rob Watches Star Trek,” check out the archives.