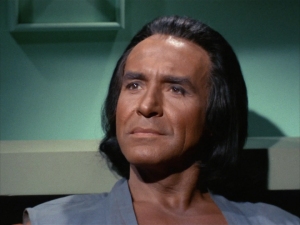 So this is the famous Khan, eh? As in The Wrath of Khan. I knew what older, white-haired,movie Khan looked like via pop culture osmosis. But I never knew there was a dashing younger model.

The theme of “Space Seed,” as I see it, is about the question of just how far man has evolved. How far have we come from the era of the savage beast toward the peaceful society of our dreams?

Try not to chuckle, or even look out the window as you ponder that. 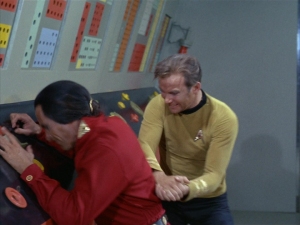 There’s also a poignant kind of double-irony at play here. Khan tells Kirk that man hasn’t evolved much since his time. But in the end, it’s Khan that ends up trying to take the Enterprise by force. Kirk is the one who ends up showing him mercy, even gives his people their own world to inhabit. So while still not perfect, Kirk, Spock, and the others suggest that humans have in fact become that higher-functioning society.

On the flip side, “Space Seed” clearly knows there’s a good chance this move will come back to bite Kirk. And indeed it would, in movie form..

That was also a hell of a fight between Kirk and Khan. Very reminiscent of…wait for it, because you know I had to mention it…Batman ’66. But this has a great one-on-one factor going for it. Whereas the Batman fights were usually with a bunch of henchmen. Khan himself is pretty formidable. The way that red-shirt sold the shot for him after he pried the door open? Very epic in a campy, ’60s sort of way.

Not a great episode for the ladies, per se. We’ve got Lieutenant McGivers being seduced by the obviously abusive Khan. He uses her feelings to emotionally blackmail her into betraying, for all intents and purposes, her own people. Then we’ve got Uhura getting smacked across the face by a henchman. I can’t say that was easy to watch. But that’s why they’re the bad guys, I suppose.

One person it was a great episode for? Bones. Star Trek, or at least what I’ve seen of Star Trek, hasn’t really been high on “bad ass” moments. That’s not really what the original series was about. But Bones sure as hell gets one when Khan emerges from hyper-sleep in the med bay.

“Either choke me or cut my throat.” God damn. He even tells the guy HOW to cut his throat! No lie, Bones might be my new favorite after that.