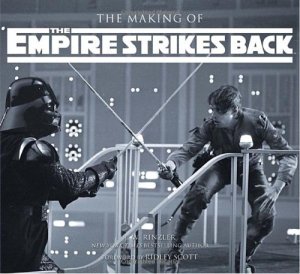 Though he has his critics, me being one at times, I could listen to George Lucas talk Star Wars for hours, specifically the in terms of plot evolution. So that was probably the aspect of The Making of The Empire Strikes Back I found most appealing.

Released for the 30th anniversary of the film, this coffee table book chronicles the movie’s creation and release, starting in May 1977 (when the first film was released) and ending in December 1980. It features old and rare interview content from the film’s cast and crew, a variety of photographs, unseen concept art by Ralph McQuarrie, and more.

The really cool thing about this book is that Rinzler more or less presents the content in chronological order. It almost feels like you’re reading a production journal that includes interviews with the cast and crew. That’s likely in part because the book borrows a great deal from Once Upon A Galaxy: A Journal of the Making of The Empire Strikes Back by Alan Arnold, which was published in 1980. 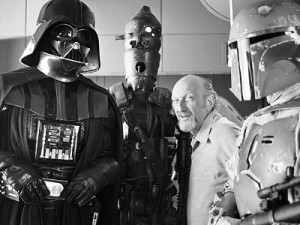 The book will likely tell you more than you ever wanted to know about the making of Empire, mostly looking at it from a director’s perspective, an actor’s perspective, and a special effects perspective. This is a bit of a double-edged sword, because if you’re reading this book from cover to cover, chances are you’re going to get bored at times. As I said, I love hearing George Lucas, and in this case Irvin Kershner, talk Star Wars. But as amazing as the special effects in the film are, their formative process doesn’t interest me as much.

But you can certainly argue that this book doesn’t need to be read to be enjoyed. For Star Wars buffs, the photos alone might just be worthy the hefty $85 price. We see some fantastic candid behind-the-scenes shots. For instance: Kersnher showing Peter Mayhew (Chewbacca) how he might hold C-3PO’s severed head, Carrie Fisher sitting in the carbon freezing chamber alongside numerous stormtroopers and Ugnaughts (pig men) during a break, Mark Hamill in the swamps of Dagobah with Yoda…along with Kermit and Miss Piggy. Plus, there are lots of shots from the set that just show the actors being themselves. Those are fun to look at.

The detail on some of these photos is amazing. There’s a tight black and white shot of Yoda on Mark Hamill’s shoulder, and you can see not only the sweat on Hamill’s face, but a lot of the little details on the puppet. The creases in its face, the detail in its hands, how life-like the eyes look. It’s almost breath-taking. 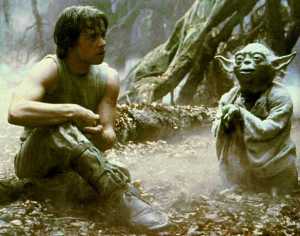 The book provides some insight into the behind-the-scenes tension that went on during the film. Apparently, Hamill was worried that Luke Skywalker was bring written out when he read Yoda’s “There is another” line. Also, Empire was way over budget, and we read about Lucas’ fear of having to turn the film over to 20th Century Fox in order to finish it, as opposed to owning it himself.

The only real drawback to the book is its price. For casual fans, $85 is a lot to ask for a book, and I consider myself more than just a casual fan. You get your money’s worth, but you might have to save up for it. Or you could always try the library.

Though the book in its entirety didn’t interest me, I can’t deny The Making of The Empire Strikes Back is a gem for both die-hard collectors and casual fans of the movie, by virtue of the sheer volume of content it contains. It’s a fitting tribute to one of the greatest films ever made. In a recent interview with StarWars.com, Rinzler said he’d do a book like this for Return of the Jedi if sales justified it, which I’m sure they will. Star Wars is recession-proof that way.