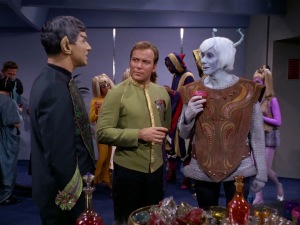 There’s a moment in this episode that I absolutely love. It’s when we cut to a wide open common area and see all the various aliens that have come together on the Enterprise. We’ve got blue people with antennas, we’ve got pig men, we’ve got little people painted gold (shown below). And of course, we have a Vulcan.

For yours truly, this is a sort of gloriously campy predecessor to what we’d see 10 years later in the cantina scene in Star Wars. For a few brief moments, Star Trek does some world-building simply via the visuals. Those glorious ’60s sci-fi visuals.

The only thing missing was a Gorn. Though that particular alien race seemed, shall we say, less inclined toward diplomacy. And hey, maybe Kirk’s got hard feelings. You can’t blame him, can you? 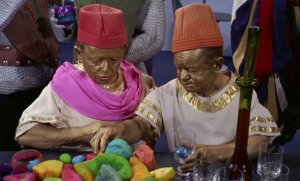 In addition to a Gorn-less alien convention, we’ve got quite a bit else happening in this episode. A family reunion with Spock’s parents, Marek and Amanda. We then go into a murder investigation after one of the pig men is killed. Next we find out Marek is ill and needs a blood transfusion from his son. This leads to Bones having to perform the procedure as the Enterprise is rocked back and forth in a space battle with the Orion crime syndicate. There are so many plates spinning, and yet it somehow all seems to fit. That’s a credit to the writing.

So Marek is Vulcan and Amanda is human. The Vulcan mindset is that humans are emotional, thus irrational. Vulcans, on the other hand, are strictly logical. The idea, which we see played up in this episode, is that Spock gets his rarely seen emotional side from his mother.

I reject this notion.

MEANWHILE, IN NOVEMBER OF 1967: The satellite ATS-3 transmits the first color image of Earth’s entire disk (nearly all of the western hemisphere).

We’ve heard Spock discuss the Vulcans and their history before. As a race, they were once quite volatile even by human standards. Warfare was commonplace, to the point that it threatened their very existence. Their salvation came via the adoption of a philosophy that cast uncontrolled emotion as the root cause of all problems. Thus, the need to rigidly control all emotion, and conduct one’s self via an ethical and logical code. 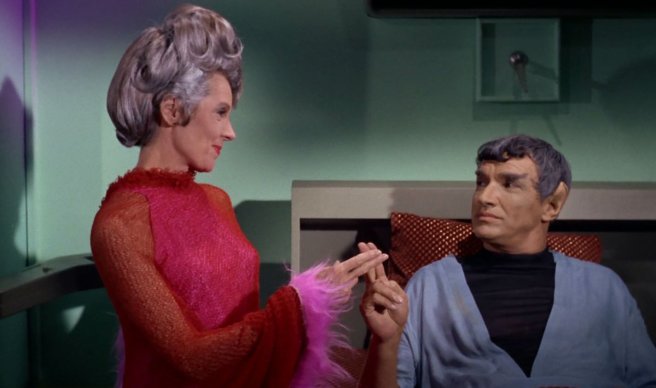 So the Vulcan mindset is cultural, as opposed to being somehow biological. They are taught to be as cold and emotion-less as they are. This flies in the face of the show’s implication that Spock’s behavior is genetically influenced by either one of his parents. For all intents and purposes, humans and Vulcans are born with the same blank slate. The difference lays in nurture, not nature.

What I’d love to see is a new and budding romance between a human and a Vulcan. I’m sure the franchise has covered that at some point in its 50-year history. But thus far the closest we’ve seen (or at least the closest I’ve seen) is the strange dynamic between Spock and Nurse Chapel. Not exactly Romeo and Juliet, those two…