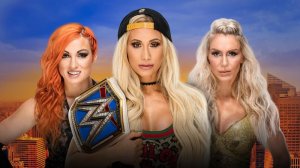 When you look at the timing of this Evolution pay per view they’ve got for the women in October, it seems like the top of the card is shaping up to be Ronda vs. Natalya, Sasha Banks vs. Bayley, and Becky Lynch vs. Charlotte Flair. The latter of which would be for the Smackdown Women’s Championship.

They’re sewing obvious seeds of dissension between Becky and Charlotte. I dig that. It makes for a great friends-turned-enemies match. Not to mention a much deserved turn in the spotlight for Becky. She deserves to win the title at either Summerslam or Evolution.

But with the addition of Charlotte to this match, I think Becky is going to have to wait until October. There’s been buzz for months about Ronda Rousey vs. Charlotte supposedly headlining Wrestlemania 35. Given all the self-congratulating they love to do over this “women’s evolution stuff,” that seems not only possible, but likely. I think you’ve got to have Charlotte as a heel for a match like that. Not just because of how fans have taken to Rousey, but because Charlotte is better as a heel anyway. She is Ric Flair’s daughter, after all.

What we’re seeing on TV these days is the spark that lights that fire. And in the process of turning to the dark side, Charlotte will steal Becky’s hard-earned spotlight. 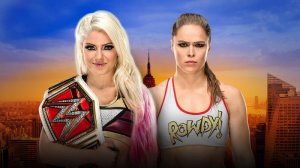 Think back to a few years ago, when Alexa Bliss was managing Blake and Murphy. Who’da thunk she’d wind wrestling Ronda Rousey in a high profile pay per view match like this? Make no mistake, this is a career match for her. And I’m expecting a good performance from her. She’s so expressive and flamboyant out there, which is perfect for a high-profile story like this.

Looking ahead, my guess is Ronda wins the title here, rematches Alexa at Hell in a Cell, then finally wrestles Natalya at Evolution. All the while, they can play up that the heels all think she’s an undeserving rookie champion.