Sometimes I think the so-called “smart” fans forget what real heat is. Wrestling is designed to make us angry, and play on some of our most basic human instincts. WWE did that with the finish to the first ever Women’s Money in the Bank Ladder Match on Sunday, and people were mad. The problem is they were mad for the wrong reason.

The finish of the match came when James Ellsworth climbed up the ladder, grabbed the briefcase, and dropped it down to Carmella. So the inaugural Women’s Money in the Bank Ladder Match was essentially won by a man. I got a little miffed about this initially. I even retweeted a comment or two from fans that were upset. But the more I think about this finish, the more I absolutely love it.

I’m about a pretty progressive guy. I understand what’s gets people upset about a woman needing a man’s help to do something. But let’s lighten up and realize what this is. It’s a story that’s designed to get under people’s skin, and make them want to see Carmella and Ellsworth get their comeuppance. It did what pro wrestling is supposed to do.

Hey, I’m a smart fan too. But let’s not outsmart ourselves by analyzing this stuff to the point that we can’t enjoy it anymore. 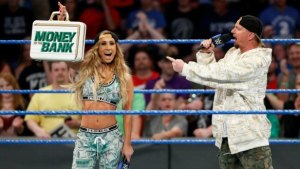 Carmella and James Ellsworth discuss the controversial ending to the Women’s Money in the Bank Ladder Match. Carmella sounded pretty scripted here. But that’s not exactly uncommon on WWE TV these days. And she had some nice fire. So I was good with this. I’d also forgotten she was picked last in the draft last year. That was a nice touch.

Big E. def. Jimmy Usos. Nice win. Nobody ever talks about Big E. being a former Intercontinental Champion. Probably because it didn’t end up being that memorable. But it merits mentioning when he’s spotlighted by himself like this.

Shinsuke Nakamura def. Dolph Ziggler.  This was fun. A little slow at first, but one of those matches where you find yourself watching for the little details. Nakamura doesn’t necessarily look like somebody who can work the mat, but he and Dolph looked good jockeying for position out there. They gave these guys a lot of time too, which a match like this deserves.

Kevin Owens def. Chad Gable in a US Open Challenge Match. Both Chad Gable and Jason Jordan have been ghosts these last several weeks. So to see Gable get a singles spotlight like this was really cool. Absolutely gorgeous moonsault, and the crowd was into that roll-through German Suplex. I’ve talked before about how Gable could conceivably do well as a cruiserweight on Raw. But I’m scared of what would happen to him, given how stale 205 Live has become.

Daniel Bryan takes the Money in the Bank briefcase from Carmella, announces a rematch for next week. Ahhhhh, so that’s what it was. Do a contested finish, then direct people to a big episode of Smackdown. It’s a smart move. Not just because ratings are down, but because it’s never been done on WWE TV before.

I’m hoping Carmella wins again. Put even more heat on her. On Talking Smack we found out Ellsworth is banned from ringside. But she can still find a way to win. Why not?

So we’ve got all these women competing in yet another Ladder Match for an on-demand shot at the Women’s Title. Meanwhile, Naomi grants Lana yet another title match for doing nothing other than running her mouth. I’d be more angry at her than Carmella.

WWE Champion Jinder Mahal def. Luke Harper. Baron Corbin teases a Money in the Bank cash-in. Randy Orton brutalizes Mahal the match. Tonight was the first night I really took note of Jinder’s new entrance. It gives him a great superstar vibe. When you see that entrance, it feels like somebody special is walking out. Is Jinder backing that up in the ring? Not necessarily. But his presentation is coming together nicely. 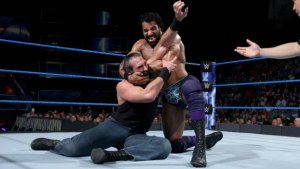 Why aren’t the Singh Brothers wrestling on TV? They’re sort of in the same role that J&J Security was a few years ago. But they’re obviously capable of more. More importantly, Smackdown needs heel tag teams.

So we’re not done with Jinder Mahal and Randy Orton, huh? Damn. I was hoping both these guys were moving on. This likely means Jinder is going to beat Randy Orton at three consecutive pay per views: Backlash, Money in the Bank, and Battleground next month. Not a bad way to get your new champion over. And now that it’s apparent John Cena vs. Roman Reigns isn’t happening at Summerslam, my guess is Jinder’s opponent in August will be “Big Match John” himself.

Maria Kanellis returns to WWE at Money in the Bank, alongside her husband Mike Kanellis. The two appear again in a WWE.com exclusive. I’ve been a Maria Kanellis fan for a long time. So it’s great to see her back. I don’t know much about Mike Bennett, but having him take his wife’s maiden name is a stroke of genius. Again, you appeal to people’s most basic instincts. A lot of men roll their eyes at the notion of a man doing that. Then on top of that you see all of the PDA, and that talk about love. It’s positively nauseating. And that’s why these two could make for a great heel act on Smackdown.