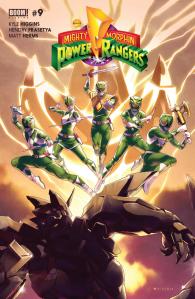 Can we talk about the Power Rangers movie for a second?

They’ve started showing the trailer in theaters, and a few days ago we got our first look at the movie’s Alpha 5 (yuck). For better or worse, it looks very much in the same vein as the darkened, CGI overhauls that franchises like Transformers, G.I. Joe, and Teenage Mutant Ninja Turtles got. As such, it looks big, epic, mostly serious, and only slightly like the show I watched as a kid. As a longtime Power Rangers fan, that’s disappointing.

I bring this up because, like the movie, this Mighty Morphin Power Rangers book from BOOM! Studios is also big, epic, and serious. At one point in this new issue, the Tommy character finds himself in a life-threatening scenario. Thinking these are his final moments, he starts to ask the other Rangers to tell his mother that he loves her. That’d be a pretty intense moment for a Saturday morning kids show. But it works here. In fact, most of what we’ve seen in this series works. So why does MMPR work, but the Power Rangers movie looks so contrived? 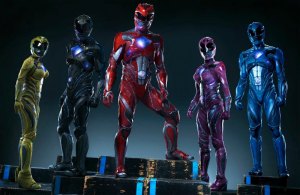 I think a lot of it has to do with what seems to be an affection for the source material. Kyle Higgins, Hendry Prasetya, and this team are looking at this world through a different lens. But it still feels like the world and characters that we know. Everyone is in the same role, everyone looks and talks (mostly) the same, and the suits and zords are the same. But it feels like we’re breaking new ground. This series almost feels like magically finding a new room in a house you’ve lived in for years. Whereas the Power Rangers movie feels like a different house, built to vaguely look like the old one.

Even when we’re introduced to an element exclusive to the book, it feels like it’s cut from the same cloth as the show. Case in point, Black Dragon, and the mysterious new Ranger we meet at the end of issue #9.

By splitting Tommy’s powers, Jason, Kimberly, Zack, and Trini have regained access to the Morphin Grid. They once again have their powers and words, albeit with a green tint. Now they must rescue Billy from Dark Dimension and defeat Black Dragon. But during the battle, they learn this new enemy is not all that he seems. This new revelation will lead two Rangers to discover a new world of peril. Literally, a new world. 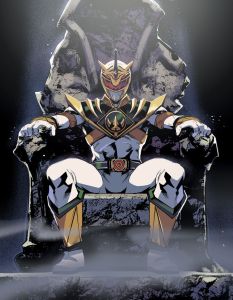 The big news from this issue is the introduction of our comfy friend on the right. He’s obviously a mix of the Green and White Ranger (designed by Jamal Campbell), with some nice little additions thrown in. The Black Dragon we’ve seen previously is apparently an empty vessel. We find this mysterious Ranger in another plane of reality, which is dark and decimated, and features big statues of Rita and the Green Ranger. My guess is this is alternate-Earth Tommy, who was somehow victorious with Rita as the evil Green Ranger, and then turned on her to rule the world on his own.

This has been treated as a big reveal, with BOOM! advertising it as the first new Ranger introduced to the MMPR world in over two decades. Indeed, it’s pretty damn cool. With this new Ranger comes a new sandbox for writers and artists to play in, and a boat-load of new story possibilities. I’m guessing (and hoping) this is what Higgins was referring to when he talked publicly about not sticking to the show’s continuity.

Turning the other Ranger costumes green is a neat gimmick. Power Rangers fans like little tweaks like that. Colorist Matt Herms pulls it off very well, and Campbell even gives it a certain grandeur on the cover.

The superhero action stuff is where Prasetya really excels, as opposed to the quieter moments with the teens. So this is a big issue for him. There’s a fantastic splash page (shown below) where the Red-turned-Green Ranger teleports in, with the Tyrannosaurus Dinozord and the Eiffel Tower in the background. There’s a great shot where Black Dragon has his back to the camera as the zords advance. There are also a lot of great little things, like a rubble effect around the Dragonzord’s face when it takes a punch. 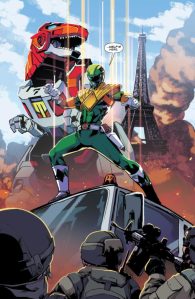 Higgins also has a nice handle on Goldar. Via some convincing, he actually releases Billy from the Dark Dimension so he can help the Rangers destroy Black Dragon. When it’s revealed Black Dragon is a robot, the idea is to let Billy dismantle him so that Goldar can take his spot back at Rita’s side. It’s shades of the dynamic he had with Tommy during “Green With Evil.” What made Goldar so intriguing was that while he worked for Rita, and was ultimately loyal to Lord Zedd, he had his own agenda. In this series, and the Pink miniseries, we’re seeing him act on that agenda. The only hole I can poke in the Dark Dimension stuff is why Goldar is so transparent with Billy. Agenda or no agenda, Billy is still his enemy.

Steve Orlando and Corin Howell are also back with more Bulk and Skull. While these back-ups haven’t done much at all for me, But the inclusion of Rita in this one offers a little more intrigue. And this story about Rita wanting the boys to control a monster does seem like something that might have happened on the show.

I admit, I’ve been nervous about this book since Higgins said that continuity stuff to Newsarama. We’ve got such a good thing going. So when the writer says something like that about the continuity that everybody knows and loves, I get antsy. With this alternate reality stuff, he’s found a nice way to have some fun and sell a lot of comics. I’m just hoping the fun continues.