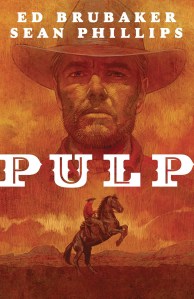 By Rob Siebert
Prefers no pulp. But will still drink it.

Everybody loves a good comeback story. It’s inspiring. It’s hopeful. Lord knows we could use a good comeback story right about now. Like the old gunslinger who picks up his pistol one last time to do right, in the process reliving the glory days of his youth. Perhaps he even goes down swinging, fighting valiantly until the very end.

Pulp is like that. Sort of. Maybe. Much of it depends on how you see good guys and bad guys, and what the difference is between them.

Set in the ’30s with World War II in full swing, our main character Max Winters is an elderly man writing Western stories for the pulp magazines, barely making ends meet for he and his wife in the process. It’s a far cry from his youth, lived much like the characters he writes about. Max Winters was an outlaw. But the world has changed, it’s leaving him behind. Until a face from his past abruptly re-enters his life. After all this time, Max Winters might have to become an outlaw one last time…

The most interesting aspect of this book is the two very distinct eras it takes place in, separated by the Second Industrial Revolution. One one end, you’ve got the late 1800s in the American West. Cowboys, horses, six-shooters, stagecoach robberies, etc. On the other, you have New York City circa World War II. The effect is almost like time travel, as we see this cowboy simply trying to adjust and keep up in a big city. Heck, space travel, as it feels like a different world altogether.

On top of everything else, Max has a heart condition. So you can more or less see where Pulp is going. Combine that with all the lamenting, the bitterness, and the urge to pull one last job, and we get something very Brubaker-ish. Fans of Criminal and Kill or Be Killed will feel right at home here.

At this point, Brubaker and Sean Phillips have done so much together they’re almost their own noirish, pulpy, crime-ridden sub-genre. As with any highly established creative force, that works both for and against them. Readers know what to expect and are happy when you give it to them. But at the same time, how does Pulp make itself stand out among such an extensive catalog?

The answer, ultimately, is it doesn’t. Yes, there’s a certain novelty to seeing Phillips draw cowboys, and I like this twist on the “old gunslinger” story. But other than that, there’s nothing here that’s necessarily outside their usual wheelhouse.

If they’d stayed in the old west, perhaps it would be a different story. We’d get to see the Brubaker/Phillips give their gritty, moody spin on a Western. But it’s hard to say what we might have gotten there, as Pulp becomes a different book altogether. It definitely loses its old gunslinger hook.

If you’re new to the Brubaker/Phillips world, then I’d absolutely recommend Pulp. Almost like a starter story or an appetizer. Let this wet your appetite, then look for one of the tentpoles. But for those of us who’ve been here before, it’s largely business is usual. Which is to say business is good. Nothing too surprising. Just a day at the office.

Special Thanks to Edelweiss for providing an advance review copy of Pulp.