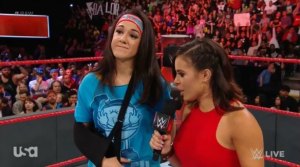 Not really in much of a talking mood this week as far as Raw goes. But there is one thing that really merits comment: Bayley.

During her match with Nia Jax last week, Bayley separated her shoulder. This week on Raw they announced she won’t make it to the show, and brought her out for an in-ring promo with Charly Caruso. She said something about the fans supporting her through this tough time, and there were audible boos from the Toronto crowd.

In response, Bayley did what is often the worst thing you can do. She acknowledged the boos. She said something like, “I don’t know why you’re booing.” Toronto answered her with even louder boos.

This has been bubbling up for a little while now. Bayley has her dedicated fans, of course. But a vocal minority has been turning on her in recent months. It’s not Bayley’s fault, so much as they way that character has been written. There are a lot of examples we can point to. But the biggest one is probably her recent program with Alexa Bliss. That brutal “This is Your Life” segment, the disappointing Kendo Stick on a Pole Match, etc. The fact that she was heading into yet another match with Alexa at Summerslam probably didn’t help matters.

The real-life Pamela Martinez may not realize it now, but this injury might turn out to be the best thing for her. That character has a stink on her that some time away from the limelight can help with. When she comes back, the fans will be excited to see her again.

Granted, that doesn’t mean they’ll write or book her any better when she gets back. But let’s take it one step at a time.

One thought on “The Bayley Backlash”