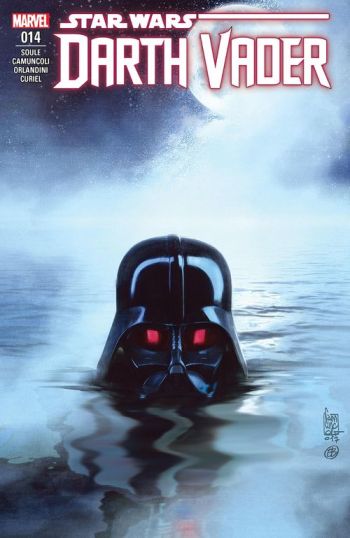 THE ISSUE: Darth Vader leads an attack on the aquatic planet of Mon Cala, home of the future Admiral Ackbar.

WHY IT’S EPIC: Machines and water don’t mix. Darth Vader is famously “more machine now than man.” As we’ve never seen Vader in an underwater scenario (at least not in the movies), this cover is instant intrigue. Apparently Vader’s suit is waterproof, so he doesn’t short out. But how does that work with his breathing?

Regardless, putting Vader in a shot reminiscent of Swamp Thing or Jason Voorhees is an absolutely brilliant move by Giuseppe Camuncoli. It’s the kind of thing you’d never see coming, and yet it works so well. It almost fits. Almost…

This cover’s unsung hero is painter Elia Bonetti. Camuncoli gets the top billing, and even the sole credit in some places. But with due respect, Bonetti is the star here. Without her, you’ve got a completely different texture. Look at the water and the accompanying mist. Look at the moonlight, and how it reflects off both the water and Vader himself. Simply put, it’s beautiful work.

The red eyes are what really seal the deal. They pierce, intimidate, and bring life to the whole shot. It’s kind of a cute little nod to the faint red tinge the Darth Vader lenses had in the original film. It wasn’t even that noticeable, and they were gone in Empire and Jedi. But the costumers for Rogue One brought them back to be consistent with A New Hope.

The movie still sucked. But cheer up, guys! They got Darth Vader’s eyes right!