The February 3 episode of Raw was, without any sort of hype or announcement, the first ever two-hour edition of the show. This was obviously an attempt to be more competitive with WCW Monday Nitro, and there were clear efforts made to make this feel like a bigger show than it was. They were in the Toronto SkyDome, though at one point you can see it’s way under capacity. And all hands are on deck here.

This show was hyped as “Royal Rumble Raw.” We’d been told the week before that the Rumble match would be shown in its entirety. That’s not what happened, as we merely got highlights. Maybe they decided to stick with fresh content? I guess the idea of airing pay per view footage that’s two weeks old is a little lame.

Vader def. Stone Cold Steve Austin via disqualification. Before the match, Bret Hart attacks Austin from behind. Well, they weren’t going to have one of these guys pin the other before Final Four, right? They want it to look like everybody’s on an even playing field. 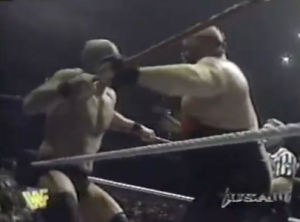 Things are noticeably a little angrier on this show, presumably to hype up the drama. Before this match begins, the normally reserved yet heroic Bret Hart comes out and ambushes Austin. After the match, a commercial airs for Thursday Raw Thursday, where all the wrestlers are full of piss and vinegar. Again, even Bret, who yells: “Everybody better get out of my way!” They hadn’t quite found their famous “Attitude” yet. But they were looking for it.

Savio Vega def. Flash Funk. This is the television audience’s first exposure to heel Savio Vega, who turned heel off camera at a house show at Madison Square Garden. At this point, the only difference is a big leather jacket he wears to the ring.

Jim Ross interviews Sycho Sid. During some of these old promos with Sid, they keep his music playing at a lower volume. That’s a great effect. It keeps his mystique alive. Especially as he’s talking about evil. He’s not particularly articulate. But it sounds like he’s saying stuff that’s spooky and cool. So it works.

Doug Furnas and Phil Lafon def. The British Bulldog and Owen Hart in a WWF Tag Team Title Match via count-out. The titles do not change hands. Rediscovering Phil Lafon’s work has been a nice byproduct of this whole Raw ’97 experience. But I maintain what I’ve said before about these two: No personality. Very vanilla. So there’s not much to latch on to. 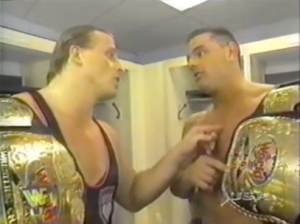 Owen as he steps through the ropes: “I hate Canada! I’m the only thing good about Canada!”

Crush def. Goldust. Savio comes in with a spinning heel kick to Goldust to cost him the match. There’s heel Savio.

These matches drag. It’s very apparent they’re not fully prepared for the move to two hours yet.

Shawn Michaels and Bret Hart come face-to-face in the ring. Austin attacks Hart from behind. The best thing on the show by a mile. I’ve always remembered one particular moment from this segment. Shawn is talking about not being liked. He says: “Everybody hated Muhammad Ali while he was the world champion. Now everyone refers to him as the greatest of all time.”

WWF hypes the debut of Tiger Ali Singh. If you’ll recall, the highlight of Singh’s WWF career was getting audience members to lick toe jam and eat boogers. A true success story if there ever was one… 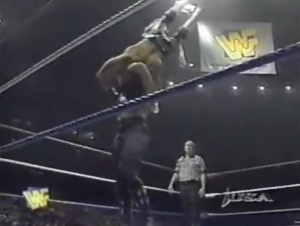 Hunter Hearst Helmsley def. Marc Mero after a shot with brass knocks. If you watch these shows back, you notice the announcers keep talking about Robin Hood, as they do during this match. It took me awhile to figure out exactly what the connection was.

On January 13, TNT began airing The New Adventures of Robin Hood after WCW Nitro. That night, a match between Hulk Hogan and the Giant began two minutes before Nitro went off the air, and continued during portions of the commercial breaks during Robin Hood. Unique, to be certain. But obvious fodder for jokes.

The Undertaker and Ahmed Johnson def. Farrow and Mankind in a No Holds Barred Match. We saw Ahmed make use of his beloved two-by-four in this match, chasing the Nation off and then hitting Faarooq in the back. We also saw Vader attack ‘Taker in this match before Mankind takes a Tombstone on a chair and loses the fall.

All in all, not a strong show. Even by modern standards. Though that will change next week, as we get to a pretty famous Raw moment involving HBK. Though perhaps infamous would be a better word to describe it… 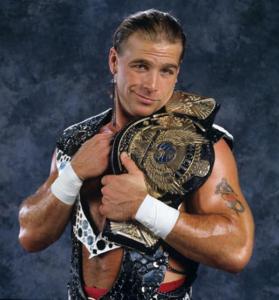 The January 27, 1997 edition of Raw was essentially about two things: Ahmed Johnson’s feud with the Nation of Domination, and more importantly the WWF Championship.

I’ve always been of the opinion that the most important thing in a wrestling promotion should, more often than not, be the Heavyweight Championship. That’s what motivates your characters. That’s what everyone aspires to have, and it’s what everybody shows up for. Steve Austin famously said that if you’re not trying to become the WWF Champion, then you shouldn’t be in the company at all.

This show has a great segment that’s centered around Shawn Michaels being the champion, and everyone vying to take what he has. What’s more, he says he’s willing to do anything it takes to keep it. Before you even inject the various personal rivalries into the scenario, you’ve already got instant drama.

Too often in today’s WWE, I think they take the “chase” factor for granted. More on Raw than Smackdown. We need to know how important that Universal Championship is, especially because it’s so new. Kevin Owens, though cowardly and underhanded, needs to be seen as the man on Raw. Instead, he’s simply one of a few top guys holding a prop.

Is it fair to compare anyone to Shawn Michaels in the mid-’90s? Of course not. By my point is more about how things are booked and written on television. I look forward to contrasting what was happening with the WWF Championship at this time in 1997, compared to what’s happening with the two Heavyweight Titles now. 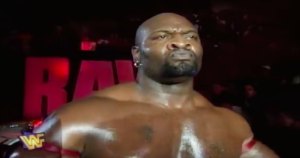 Crush def. Ahmed Johnson. In 2017, Ahmed Johnson is more or less a punchline. His unintelligible promos. Those weird things he wore on his legs. Reportedly he wasn’t the safest guy to work with either. But I get what they saw in him at the time. He was a big, scary dude. When he would get mad, he was intimidating as hell. He had a presence, too. Crowds reacted to him. The real-life Tony Norris was actually the first black Intercontinental Champion, which gives him a place in history.

The story here was that Savio Vega had joined the Nation of Domination the previous Saturday at a house show in Madison Square Garden, turning on Ahmed. This was obviously off television. As this show was taped along with the previous week’s show, Savio didn’t appear to follow up on that.

I was surprised to see Crush win this one. But Vince and the King protected Ahmed by telling viewer that he’d taken a beating at the Garden on Saturday, and then wrestled on WWF Superstars the previous day. From a storyline perspective, it made sense that Ahmed was worn down. They sold us on Crush’s Heart Punch finisher too.

Time Stamp: Lawler says Ahmed is having a “New England Patriots kind of day.” The Patriots had lost to the Green Bay Packers at Super Bowl XXXI the night before.

Shawn Michaels speaks for the first time since regaining the WWF Title. Rematch with Sycho Sid announced for Thursday Raw Thursday. Final Four participants confront the champion. Once again, it’s all about the WWF Championship. Everyone is dying to win it, and the man wearing it will do anything he can to keep it. I love this segment.

The essence of Bret Hart’s side of this segment is that he tells Shawn to do whatever he has to do to come into Wrestlemania with the title. One of the things he says is, “I don’t want you to injure yourself.” Considering what Shawn does on that Thursday Raw Thursday episode, that’s so ironic it’s almost laughable.

As the wrestlers talk about Wrestlemania here, Vince interjects twice to remind them not to forget about Shawn’s title match with Sycho Sid. Good business on his part.

The British Bulldog def. Doug Furnas, despite Owen Hart accidentally striking him with his Slammy Award. Owen and Phil Lafon are out there, having wrestled each other earlier in the night. Owen’s green track suit was certainly an interesting choice.

Clarence Mason is associated with both the Nation of Domination, and this team of Owen and Bulldog. This used to be a fairly standard thing. Bobby Heenan’s multiple “clients” in the ’80s come to mind. We have so few managers today. But the ones we do have likely wouldn’t be with multiple wrestlers like this. The one rare exception is Paul Heyman, who a few years ago was with Brock Lesnar, Curtis Axel, and Ryback simultaneously.

The Clarence Mason character, played by a real-life attorney, is clearly a product of his time. Johnny Cochran had become a household name in the ’90s, thanks to the OJ Simpson trial. Clarence Mason wasn’t nearly as charismatic as Cochran was. But we got the idea.

The Godwinns def. Vader and Mankind via count-out. On the subject of managers, Paul Bearer was put with Vader after helping him beat the Undertaker at the Royal Rumble. That’s an odd pairing that’s even odder when you throw Mankind in there.

We’ve heard Mick Foley, and other wrestlers talk about taking Vader’s punches in the corner. In this match, you can see exactly what they’re talking about. The big guy gets Phineas Godwinn (later known as Mideon) up against the buckles and pops him in the head repeatedly. And this was in the era before they were so mindful of concussions. On top of that, Vader later takes an unprotected chair shot to the head from Foley.

Ahmed tries to attack the Nation with a two-by-four moments before Raw goes off the air. For some reason, a two-by-four always seemed to be Ahmed’s weapon of choice. I damn sure wouldn’t want to be around this guy when he’s got a weapon…