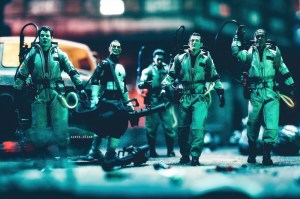 “Busy night, Frank? Ever think about leaving a few breathing?”

That’s the caption that Scott Bline put on this image of the Punisher and the Ghostbusters. The picture stands on its own just fine. It’s got great lighting, and reminds me of the cutscene in Ghostbusters: The Video game where the boys see Stay Puft again. But this is the rare instance where a caption is the one detail that puts an image over the top. It’s been stuck in my head for weeks.

It’s funny, I can actually visualize a story where Frank Castle and the boys in gray team up. You talk about wiping somebody off the Earth completely. Kill ’em, then capture their ghost. Gone without a trace.

Your move Marvel. You too, IDW Publishing.

For more from Scott Bline, check out his web site. 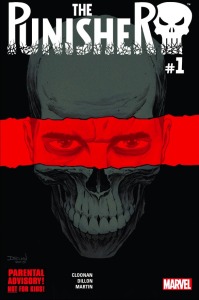 I did a double-take when I saw the name Cloonan on this cover. I’ve become so used to seeing her name on Gotham Academy, that seeing her on something like Punisher caught me off guard. Granted, she’s no stranger to the “dark” stuff. It’s simply a testament to how versatile she is as a writer.

Indeed, Frank Castle, a.k.a. The Punisher, is back in a new ongoing series. And he’s doing…well, Punisher stuff. A new group is is preparing to ship a lethal drug called EMC, which “turns $#%@-ass shrimps into soldiers with one toke.” Aiding them is a former mercenary codenamed Olaf, who happens to have old military ties to Frank Castle. But it’s not exactly a happy reunion when Olaf comes face to face with The Punisher, who performs his own bloody, stabby, shooty version of a drug bust. But in doing so, he finds himself on the radar of a sadistic psychopath who may mangle him strictly for the fun of it. 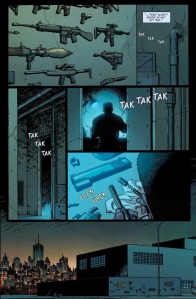 The most interesting aspect of this issue is how The Punisher is portrayed, as many reviewers have called it, “a force of nature.” He has no dialogue, and we’re entirely disconnected from what he’s thinking. Like a cataclysmic storm, he comes and goes leaving a trail of victims in his wake. To an extent, this keeps Frank’s feet in both of his habitats. He’s both a ground-level street hero, and a hero in the larger, super-powered Marvel Universe.

The great Steve Dillon is reunited with Frank Castle here. At this point, Dillon is so identified with The Punisher that when you type his name into Google, the first suggested search is “steve dillon punisher.” This foray is about as hard-edged, no-frills, and grim as one would expect. Dillon also doesn’t hold back on the gory stuff, very much earning that parents advisory we see on the cover. And Frank isn’t the only one getting his hands dirty. My favorite panel amongst the bloody and gruesome sees Olaf shoot a particularly disrespectful drug smuggler to through the head, in the process leaving a blood splatter on a nearby window.

But the high point of the book is a page without any blood or dialogue (shown above). The camera simply makes its way into Frank’s workshop, passing a variety of deadly firearms on the wall. The only words on the page are a series of metallic “tak” sounds. We come up behind our anti-hero as he prepares his tools for the slaughter to come. Truly chilling. 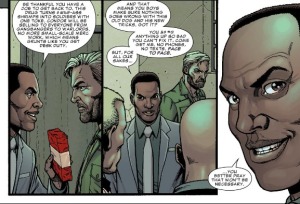 Also chilling is the unadulterated crazy that Dillon draws into the eyes of our apparent villain for the coming arc, Face. Why is he called Face? You’ll find out…

Cloonan also writes a hell of a line that we read about mid-way through the issue. When Olaf realizes they’re dealing with The Punisher, and one of the bad guys calls for him to be killed, he replies with: “You can’t kill Frank Castle. He’s already dead.”

The Punisher #1 is a fine start to a new series, and a well timed one. Given Jon Bernthal’s portrayal of the character on Daredevil, and a Punisher Netflix series on the way, a lot of new eyes of been on Frank Castle recently. Rarely has there been a better time for a quality Punisher book. 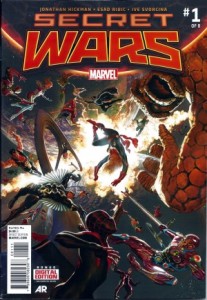 I’m not a Marvel noob by any means. I’ve been a reader for a long time. But full disclosure: I’ve been out of the loop lately. As such, Secret Wars #1 was bewildering to me on a number of levels. But my God, if it threw me for a loop, imagine what it must have done to those poor noobs…

You know the ones I’m talking about. The ones that saw Avengers: Age of Ultron on the first of the month, then came out to the comic shop several days later to see what the hell these Marvel comic books were all about. And low and behold, they found this: A book that pits the primary Marvel Universe against the Ultimate Marvel Universe in a desperate fight to survive as the multiverse collapses. And what’s more, it’s wrapped in a gorgeous Alex Ross cover (Oh hell, they’re all gorgeous.) very much reminiscent of Crisis on Infinite Earths. 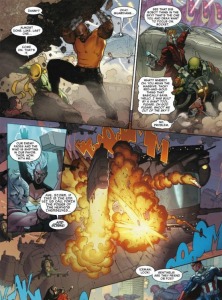 But indeed, a new Marvel Universe is about to be formed. And to  be fair, Marvel is doing what it can to keep everybody in the know. The book has a plain white expository page that simply says: “The multiverse is dying. Only two universes remain. Today, Earths collide.” That’s a pretty simplistic view of something that’s not simple at all. But it states things pretty plainly. We also get cast page, that diagrams almost everybody in the issue. Hell, the issue even comes with a giant foldout of Battleworld, which as I understand it, is where much of the story will take place.

The issue also has a pretty damn good hook, as Doctor Doom, Doctor Strange, and Molecule Man come face-to-face with the Beyonders, as an unknown narrator talks to us about God, and what happens when we die. Heavy stuff. But appropriate I suppose, considering, you know, it’s the end of the universe. When we circle back to it at the end, it’s fairly strong.

If you’ve been following the Ultimate books and the main Marvel stuff, there are some cool moments to be found here. Captain Marvel and Ultimate Iron Man face off. We see the Triskelion fly into primary Marvel Manhattan. Both versions of Spider-Man seem to simply be caught up in the mayhem, which I find fitting considering their standing within their respective fictional universes. But most of my cool points go to the sequence with The Punisher in the bar (see below). Talk about a scene with a punch line… 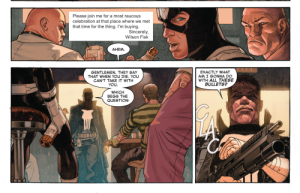 Still, the issue jumps around so much between different characters that it can almost be frustrating, especially if you’re not familiar with who’s who. It’s understandable, considering the scope of what’s happening. But in the span of one issue (An oversized issue, but still a single issue.), we jump from Luke Cage and Iron Fist, to the Guardians of the Galaxy, to Storm and Thor, to Captain America and Iceman. And that’s just one page (shown above in part)! Throw in the fact that some of these characters don’t look the way mainstream culture knows them, i.e. Thor being a woman and Sam Wilson being Captain America, and the cyclone of confusion only gets stronger.

Both Esad Ribic and colorist Ive Svorcina deserve much credit for the much-needed epic feel they inject into the issue. While we don’t see a great deal of it here, Esad’s rendering of the Doctor Doom mask is awesomely intimidating. The desperation, terror, and determination he draws our heroes with is a beautiful thing. And Svorcina makes the issue a beautiful blaze of color, particularly in the way she reflects the colors in the sky off the various costumes. The issue as a whole is a lot to take in. But once you do, you know it’s gorgeous.

Regardless of how you rate the issue, between Secret Wars and Convergence, I’ve officially got event comic fatigue. More specifically, multiverse fatigue. No matter which worlds survive these respective crises, I can honestly say I’m ready to go back to my regularly scheduled comic books. Anybody else up for a non-event comic or two?

Image 1 from pastemagazine.com. Image 2 from gaish.tumblr.com.