I continue to be a frequent viewer of the Alex Ross YouTube channel. While many of the videos are only two or three minutes, I say the art by itself is worth the click.

Today however, they put out a longer one to note the 25th anniversary of Marvels. Ross dives into some of his inspirations while working on the book, and the emergence of painted comics in the late ’80s and early ’90s. Definitely a stand-out on the channel. 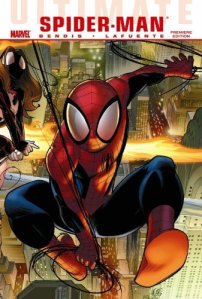 Last year, Marvel’s Ultimate line featured a massive crossover. In Ultimatum, Magneto attempted to destroy the Earth, New York City was hit with a massive flood, and numerous heroes were killed off. The Ultimate line was relaunched, presumably to once again draw in new readers.

Thus, Ultimate Spider-Man has become Ultimate Comics Spider-Man. And I’m not sure I’m happy about it.

When we open the book we find Peter Parker working at a fast food joint, Spider-Man is being hailed as a hero in New York City, displaced heroes like The Human Torch and Iceman (both teenagers) are showing up at the Parker house, plus Peter and Mary Jane Watson have broken up…again.

Meanwhile, Mysterio, one of the few Spidey villains Brian Michael Bendis didn’t reinvent during his first run, emerges for the first time in the Ultimate universe. Throw in a new mystery hero that actually makes Peter’s life a bit easier, and there’s plenty of fodder for storytelling.

Bendis, who wrote every issue of Ultimate Spider-man, continues his run with this book. He delivers his usual clumsy wit, mixed in with solid suspenseful storytelling. It’s been said that the great thing about the Ultimate version of Spidey is that so much of the drama comes from Peter Parker’s personal life, as well as his superhero adventures. That thread definitely continues in this book, as awkwardness unfolds between Peter, his ex-girlfriend Mary Jane, his OTHER ex-girlfriend Kitty Pryde, and his CURRENT girlfriend. Did you get all that? 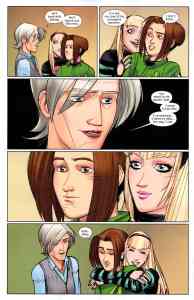 David Lafuente’s art is solid, and fits the book well, But like Stuart Immonen (who did the art for the last several issues of Ultimate Spider-man), he’s in the unfortunate position of having to follow Mark Bagley’s stellar 111 issue run on the book. When I think of these characters, I still think of Bagley’s art. If Lafuente stays with the title for an extended period of time, fans will probably grow more comfortable looking at his version of this world. But for now, it feels like we’re still breaking him in.

Wall to wall, this book is decent, but the consistent presence of The Human Torch, Iceman, Kitty, and the others makes it feel at times like a Disney Channel show about superheroes. That makes me worried about the direction the title is headed in. Ultimate Spider-Man certainly had its share of team-ups, but now it’s looking like The Human Torch and Iceman will be sticking around for awhile. I’m concerned that the book is turning into Ultimate Comics Spider-Man and Friends.

Marvel officially rates the book as T+, meaning it’s primarily aimed at teen readers. But Ultimate Spider-Man was a teen book too, and it didn’t need to be flooded with teen superheroes to make it interesting. I’d have preferred this Spider-Man book to have the burden of conflict placed solely on Spider-Man’s shoulders, especially since it represents the launching of a new title.