By Rob Siebert
Not A Doctor. Even in Space.

So it looks like, at least as far as the comic book industry is concerned, our long global nightmare is finally starting to wind down.

Between the launch of Lunar and UCS as new alternative distribution, and Diamond announcing a return to form on May 20, the comic book industry is a few steps closer to being back in business. In the meantime, last week Marvel published Doctor Aphra #1 in celebration of Star Wars day. Meanwhile, issues of Justice League, Lois Lane, among other issues from DC are set to hit the stands tomorrow. I knew I liked Rucka’s Lois Lane maxi, but I had no idea absence would make the heart grow this much fonder…

I also tacked X-Men #2 on. I don’t know that I’ll start picking up the book after it starts shipping again. But curiosity has been getting the better of me. Plus, there’s no better time than now, is there?

This issue is titled, “The Accelerated and the Infinitismal.” Heh. I dig it.

The Infinitismal in this case is the Atom, a.k.a. Ryan Choi, as opposed to Ray Palmer. Some dialogue between them suggests this story takes place early in Flash’s career. Which doesn’t necessarily jive with the timeline as I know it. But oh well.

As their target audience is the superstore crowd, most of these DC Digital-Firsts are drawn very accessibly with new readers in mind. As it’s a little more cartoony, Clayton Henry is able to separate himself from the pack.

This series, at least at this early juncture, more or less casts Aphra as the Indiana Jones of the Star Wars Universe. She’s an archaeologist looking for priceless artifacts.

Despite enjoying her Kieron Gillen’s Darth Vader series, I could never get into Aphra as a solo act. In all honesty, not much has changed now. I just don’t think she’s the flavor of Star Wars I’m looking for at the moment. But the book is written and drawn just fine. Also, good on Marvel for hiring a mostly-female team for this one.

Now this is more like it. A slightly different take on Deathstroke. Not changing him too much. But just enough.

Jason Todd continues to look on. Is it a coincidence that he looks a little bit like the DCAU Jason Blood? Or are they just giving him the white streak in his hair from the comics? I imagine it’s the latter.

My sole artistic critique? Some bad coloring on the steam rising from Bruce Wayne’s coffee. Or maybe it’s tea. 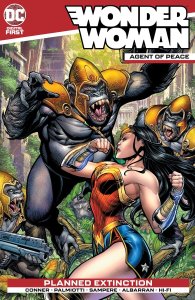 Diana attempts to take a vacation day with Steve Trevor in this issue. Bad call. That’s always when the bad guys strike. In fact, Wondie then has an extremely busy couple of days stopping a meteor from colliding with Earth, then solving a murder mystery in Gorilla City. It’s all very nicely drawn by Daniel Sampere.

I always thought the Gorilla City idea was a better fit for Wonder Woman and the Amazons, rather than the Flash. Both are more or less primitive societies. But we get the best of womankind against the worst of mankind’s primate impulses. 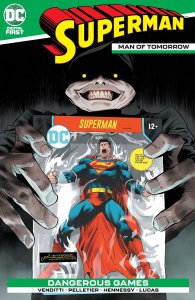 Yet another awesome “shirt opening” sequence by Pelletier and the team this week. This one actually lasts a page and a half.

I don’t know if it’s because I have a baby girl now and it hit me in the feels to see Big Blue save a mom and daughter, but I can’t get enough of “boy scout” Superman.

Though at one point while dismantling a robot he gives us, “This game will cost you an arm and a leg!” Even I have my limits, folks.

I haven’t done the research yet on how a teenage (?) Rachel and Nathan Summers are with Cyclops in he present so that they can “help your old man beat up some monsters”. I’m just going with it. That’s pretty much what you have to do with most X-Men books.

Some cool creature art from Leinil Yu in here, though. Along with an awesome line from Cyclops: “I’ve got more hours in a cockpit than I do in therapy, son, and let me tell you…I have done the work.”

By Rob Siebert
A Giant Something or Other

In response to the comic book industry being essentially stuck in limbo due to the Coronavirus pandemic, DC is releasing stories digitally that were previously exclusive to their DC Giants line. The Giants books were originally exclusive to mass market outlets, most notably Walmart. So what we’re getting here are basically re-prints.

But hey, they’re new to me. Plus, there’s some all-star talent attached to this stuff. We’ve got Brad Meltzer and Jim Lee on Batman, Amanda Conner and Jimmy Palmiotti on Wonder Woman, Gail Simone on the Flash. Hey, sign me up!

I was also finally able to purchase that Superman: Villains one-shot. So I threw that in too.

Our story here is about the Parasite leeching off the city’s power grid and causing a mass blackout. In response, Superman tells the people of Metropolis to stand by one another. To share food, help find medicine for people in need, check on their neighbors, etc. Seems like a pretty poignant message right now, eh?

It’s so awesome when somebody gets Superman right. What we get here is also very accessible to new readers, and Paul Pelletier absolutely nails the art, particularly with the Parasite.

At the end of the day, this is the Superman I want to read.

What Sal Giunta and Brad Meltzer do with “Medal of Honor” is really special. So I’m simply going to encourage you to read it without going into things.

The Lee, Williams, and Sinclair trio give me Hush flashbacks. In a good way.

The second story follows a similar “service” theme, only with Kate Kane instead of Batman. We go back to her military days, which is unexpected but not unwelcome. But I’m sure it was a surprise for casual fans looking for Batwoman. 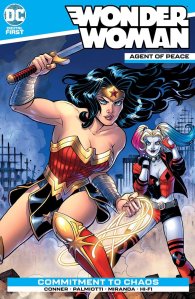 I’m not really a Harley Quinn fan. I know that’s enough to get me strung up in some circles. But I’ve almost always found her more annoying than humorous.

But with Wonder Woman as her “straight man” you get a pretty entertaining team. To their credit, they actually got me to chuckle when Harley appeared wearing what was supposed to be Amazonian armor.

Conner and Palmiotti write a hell of a Wondie. Early on, there’s an exchange between her and two security guards that I got a kick out of. Like Robert Venditti with Superman, they get her. 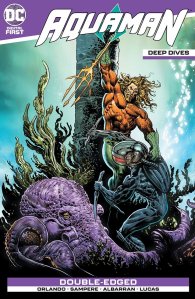 “My name is Black Manta. You killed my father. Prepare to die.”

That’s basically what this issue is about.

I imagine because these were (at least in theory) released to a different audience, they wanted to start on the ground floor in some of these stories. That means a lot of expository dialogue. Superman: Man of Tomorrow did that. But this one really lays the expository dialogue on thick.

Great fight between Aquaman and Black Manta, though. At the “Museum of Unnatural History.” I adore that.

Coming out of this issue I know two things.

The Flash TV show has indeed ruined Iris West for me. Not because of the actress. Because of how she’s written.

Had it come out a month or two sooner, a few less people would have gotten on those disease-infested cruise ships. 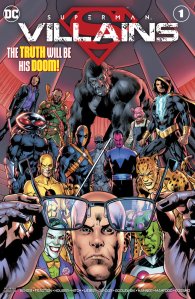 So here we have a bunch of villains reacting to Superman telling the world he’s Clark Kent. We hear from Toyman, Mongul, and a Joker-ized Supergirl (see Batman/Superman). We also get a story that bridges into future Superman and Action Comics storylines.

But by far the best part of the issue is a two-page Lex Luthor story, as he discovers he has 98 messages on his voicemail. And several of them (Possibly all of them?) are from the Joker. And he’s laughing. Take a wild guess at what he’s laughing at, folks…