**This is where we keep it nice and simple. Comic book reviews in 100 words or less. Straight, concise, and to the point.***

I’ve never been a huge fan of Superman having an extended “family” the way someone like Batman does. To me, it ruins his whole “Last Son of Krypton” thing. But damn, look at that cover. At least Dan Mora makes them look good.

There’s an “untold chapter” in this issue from Dan Jurgens and Lee Weeks’ Lois and Clark series. It’s quality, just like that series was.

Power Girl also gets a spotlight story in this issue, complete with a boob joke. Because I guess we can’t have a Power Girl story without at least one boob joke. Oye… 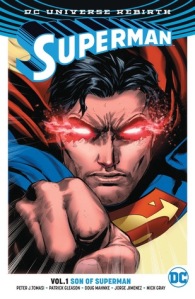 This topic has been beaten to death, but let’s touch on it quickly: It’s time to stop trying to modernize, freshen up, or worst of all, “darken” Superman. It’s been done time and time again, and it never clicks. They’ve changed his costume. They’ve made him moody and broody. One time they even de-powered him and put him on a damn motorcycle. No more. It’s time to stop being ashamed of Superman. Let the character be who and what he’s always been at his core: A champion of values. Truth, justice, hope. and yes, the American way. Let the guy smile. Embrace the character’s legacy instead of hiding from it. Let him be the hero we need in these trying times.

Son of Superman does all of that, while still carving out a new direction for the Man of Steel. Simply put, it’s the best Superman book in years. Almost a decade, perhaps.

The DC Rebirth incarnation of Superman puts the post-Crisis on Infinite Earths version of the character back in the cape and boots. He’d been brought back for Convergence, and eventually became an ongoing character again in the pages of a new book, Lois and Clark. With him was his timeline’s incarnation of Lois Lane, and their young son Jonathan. As Clark Kent finds a balance between protecting the Earth and raising his son, Jonathan must learn to manage his emerging superpowers. With those powers come responsibility, risk, and a legacy…

Instead of focusing on Superman facing a threat, we spend most of this book learning about Jonathan. We see his response to living with a secret identity, how he reacts to challenges, and how Clark and Lois are raising him. They’ve accepted that he’ll one day inherit the Superman legacy, and are gently preparing him for the role. In theory, Superman works on two levels. Youngsters can identify with Jonathan, while older parent-aged readers connect with Clark and Lois. It’s by no means a sexy approach. But artistically, it’s true to the soul of the Superman character. His adopted parents instilled him with a set of principles. Now he has to pass those principles on to his son. But the dynamic is tweaked, because he’s able to relate to what Jonathan is going through. It’s a premise that lends itself to heart-felt storytelling, not unlike what we saw from Peter Tomasi and Patrick Gleason’s work in Batman & Robin.

We kick things off with Superman: Rebirth #1, which establishes our “new” hero, with some nice fan service thrown in. The New 52 Superman was killed off, and as the post-Crisis Superman is the one who famously died and returned, he sets about bringing his counterpart back in a similar fashion. Te issue is highlighted by artists Doug Mahnke, Jaime Mendoza, and Will Quintana giving us their take on the iconic Superman/Doomsday battle. It was out of continuity for so long, and it’s brought back in what I’ll call a “wide screen” sequence that plays out over about seven pages. Mendoza’s inks compliment Mahnke’s richly detailed pencils, and Quintana’s color make it every bit the glorious and epic scene it needs to be. The same applies to when they return for issue #5. We’ve got Superman talking to ghosts, we’ve got the Eradicator trying to eradicate things, we’ve got a big Batman robot straight out of a Snyder/Capullo comic…

Actually, I don’t mind the “Hellbat” returning from the Tomasi/Gleason Batman & Robin book. Maybe it’s because Lois Lane is the one using it, as opposed to Batman. It makes for a fun holdover.

But artistically, this book belongs to Patrick Gleason, inker Mick Gray, and colorist John Kalisz. Obviously, as a co-writer Gleason has the advantage of molding the story to fit his strengths. But just from a basic figure rendering perspective, it’s so amazing to see Superman look like Superman again. Even the classic spit curl, which I’ve never been a huge fan of, is a breath of fresh air. These pages are bright, flamboyant, and unabashedly sentimental. Gleason’s slightly exaggerated, animated style is a perfect fit for a story about a pre-teen learning to be a superhero. There’s a lot of fun on these pages.

Gleason also has an amazing knack for classic Superman iconography. The page at left comes to mind, with our hero in the classic pose as an American flag waves in the background. For obvious reasons, he lays it on a little stronger in issue #1. We’ve got a two-page spread that simply shows him opening his shirt to reveal the “S” insignia. That’s followed up immediately with another two-page spread giving us snapshots from Superman’s history. This is who Superman is, and who he’s always been. To see it all reemphasized is borderline beautiful.

The biggest obstacle this book faces is establishing that this is a “new” Superman from another timeline. They obviously devote a good amount of time to it. But it’s still a lot to wrap your head around, and has the potential to be really confusing for someone jumping on. This book is about a family trying to figure out how they fit into a new world. But that runs counterintuitive to how the average reader sees Superman, as he’s so ingrained in the fabric of the DC Universe. By the time we close the book, most of that awkwardness has subsided. But to say the least, this hasn’t been the smoothest Superman relaunch we’ve ever seen.

But it’s worth it in about every possible way. It’s been far too long since a Superman book has been this good. While this is obviously a new direction for the Man of Steel, in many ways it feels like he’s finally gotten back to his roots. That’s the Superman we need right now. That’s the Superman we’ve always needed.