***Need a refresher? Head back to the beginning with Superman: American Alien #5.***

There’s something about this issue that drives me absolutely nuts. We saw it on the final page of last issue, but it’s plastered all over this one. That’s a damn shame, because in almost every other respect this issue is damn good.

Now an intern at The Daily Planet, Clark Kent is still trying to find his place in the world. For six months, a mysterious “Flying Man” has been a super-powered good samaritan for Metropolis. As Clark’s fellow intern Lois Lane ponders the hero’s motivations, The Parasite makes his first appearance. Now, the Flying Man has no choice but to start communicating not only with the police, but with Lex Luthor…

I understand I may be hung up about this, but it drives me absolutely insane: Clark Kent is wearing Batman’s cape. I talked about this at length last time, but it bears repeating. To me, Superman and Batman have always represented two sides of the same coin. Light and darkness, hope and cynicism, etc. Superman drawing inspiration from Batman implies the latter has a certain wisdom and seniority the former doesn’t, which inherently positions the Dark Knight above the Man of Steel. As a fan, that offends me. Once again, we see Batman is far too central to so much in the DC Universe. It’s what I call “Over-Baturation.” 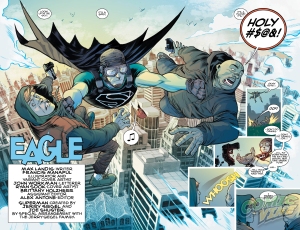 What’s more, it ruins a really charming costume. The black “S” shirt and jeans are reminiscent of Superboy’s old look. And the old school pilot headgear has a nice quirkiness to it. The outfit makes sense for a Superman who hasn’t found himself yet, and has simply thrown something together to start his mission. The dark colors also have a cool factor befitting a young adult trying to impress people.

Traditionally, The Parasite isn’t portrayed as a giant. But that’s how we see him in this issue. It suits Landis’ purposes well, and not surprisingly, Francis Manapul is really able to run with it. The explosive moments between Clark and Parasite are really well done, particularly the page when our hero simply grabs the giant by the foot and pulls him through the roof of a building. It’s a tribute to how well-rounded Manapul’s work is that he’s able to pull off both the action sequences, and the more intimate one-on-one scenes between Clark and Lois, with equal amount of finesse. And look at those colors. Wow.

Clark spends much of the issue with Lois Lane. But we also get our first meeting between Clark and Lex Luthor. Like Batman, Luthor is very much the yin to Superman’s yang, but obviously in a different way. So it’s fitting that as Clark is just starting out as a hero, he’s learning from both friends and enemies. We’re seeing portions of Superman’s philosophy and modus operandi molded before our eyes, and it’s true to the essence of the character.

The exchanges between Clark and Lois are the strongest I’ve seen in awhile. Landis gives them a nice chemistry that has a certain modern vibe without coming off as obnoxious. I imagine that’s what a lot of fans are looking to Max Landis for. He’s made it clear he’s passionate about Superman, and he obviously has his share of ideas. Now he has an outlet for some of them, and at times they’ve been very refreshing.

Portions of American Alien have been extremely annoying. But I can’t deny it’s been a worthwhile read thus far. Landis’ heart is in the right place. I get the sense he understands Superman in a way that few writers do. In that sense, when you open one of these issues, the battle is already half won.