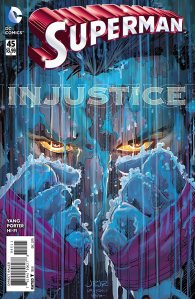 Ugh. I so want this to get better, but it’s just not happening. As we’ve seen in previous installments of the Truth storyline, there are flashes of quality in Superman #45. But the direction the story takes is all flash and little substance.

With his identity exposed, and Clark Kent’s life destroyed, Superman follows the trail of the cyber criminal group Hordr to California. Once there, he finds himself broke. So when he stumbles on to a meta-human fight club of sorts, Clark is faced with a moral dilemma. Does he go against his moral code, or duke it out for some cash?

Let’s cover the good before we descend into the negative. Clark briefly runs into Lois Lane in this issue, and wants nothing to do with her. Seeing Clark this angry at Lois, and justifiably so, is a really interesting dynamic. Obviously there’s romantic tension lingering under the surface here. How long is Clark going to stay mad at Lois for this? And what can Lois do to regain his trust? This is one of the few areas of intrigue in this series right now. 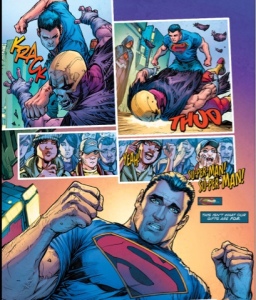 Gene Luen Yang’s spin on the meta-human fight club angle is that the fighters are “gods and goddesses from mythologies on the brink of extinction.” That take is a little overblown for my taste. The issue actually reminded of the “Grudge Match” episode of Justice League Unlimited, where Roulette lures Black Canary, Huntress, and Wonder Woman into her Meta-Brawl arena. Has Roulette even surfaced in the New 52verse? If you’re going to do a story like this, why not use a villain like her? The whole thing about gods and goddesses is convoluted, and actually slows the issue down because Yang has to explain the whole thing.

I have a hard time buying the idea that Superman, exposed identity or not, has trouble coming across money. If he were the only hero in this universe, then maybe I’d believe it. But he’s a Justice League member, he’s still got a lot of friends in Metropolis, and he’s friendly with the President of the United States. Chances are if Clark needs a loan, he can get one from somebody.

But for the sake of a story, let’s say Clark is indeed broke. Yang lets us know that Clark will not steal, as he was taught better by his adoptive father (who he refers to as “Pop” instead of “Pa” for some reason). So the prospect of earning money via a fight club is tempting. But I don’t buy the notion that he’d seriously consider participating. He’s Superman. His mission is to inspire people. It’s beneath him. If you want to put him in that scenario, have him take down the fight club. 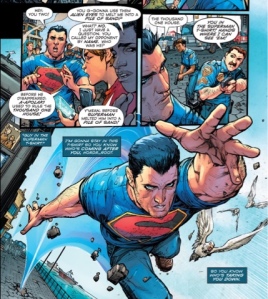 Perhaps I simply hold Superman to a higher standard than some. Too high, maybe…

The whole Truth story is so far gone at this point that it’s barely even worth it to mention ways it might be improved. But you want to do a story about Superman and money? How about you have Clark break up the fight club. Then as the sun begins to set he faces the grim reality that he has no money, no food, and no place to stay. He is now homeless, and largely de-powered. Superman has never been in such a vulnerable position. Then, he comes across a kind and compassionate civilian who owns a small motel. Recognizing him as Superman, this person gives Clark a free room, and a bit of food. As we close the issue, Clark realizes the irony of his situation. He was sent to Earth to inspire humans to to good, to “save” them. Now, one of those very humans has saved him in his darkest hour. This would provide intriguing insight into Clark’s relationship with his adopted home world.

I wasn’t aware last issue was John Romita Jr’s final go-around as the interior artist for Superman. In his place is the more than capable Howard Porter, along with colorist Hi-Fi. Hi-Fi’s colors are much richer and more vibrant than what we’ve seen in recent issues. Porter’s Superman is also much more expressive than Romita’s was. It actually borders on comical at times. But Porter is a nice change of pace. Sadly, solicitations indicate he’s only going to be around for another issue.

Solicits also indicate we’re heading into a big crossover called The Savage Dawn, featuring Vandal Savage. I wish I could say I’ve got high hopes. If you want a mildly optimistic spin on this, I’ll say it’d be fairly hard for me to be more underwhelmed with Superman than I am now.