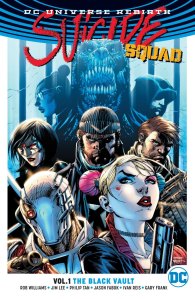 If The Black Vault isn’t the most important and most notable Suicide Squad book DC has ever published, then it’s absolutely in the top two. This is the biggest that Suicide Squad has ever felt, and may be the best its ever looked.

Thanks to the movie, the Suicide Squad “brand” has never had more eyes on it. The Black Vault features almost all of the characters from the movie, including a few pages of the Joker. So it’s bursting with crossover appeal for casual moviegoers. With this in mind, DC loaded the book up with A-list artists, most notably Jim Lee. Indeed, the master of the modern superhero epic is drawing characters like Rick Flag, Captain Boomerang, and the Enchantress. Talk about something you don’t see every day…

Task Force X, a.k.a. the Suicide Squad, is a black ops group assembled by government agent Amanda Waller. Comprised primarily of imprisoned supervillains, the team is sent on covert missions. They serve as both soldiers, and built-in patsies. Should they refuse an order or become compromised, Waller detonates a nanite bomb in their skulls. Like the movie, in The Black Vault our team consists of Harley Quinn, Deadshot, Captain Boomerang, Killer Croc, and the Enchantress. They’re accompanied by Colonel Rick Flagg and Katana.

Their latest mission sees our heroes sent to a secret Russian prison to neutralize a secret doorway to the Phantom Zone. In the process, the team meets none other than General Zod.

People can say what they want about Jim Lee’s influence, for better or worse, on DC’s “house style” right now. But when he’s in his element, he’s one of the all-time greats. Lee is at home with the dynamic and the awe-inspiring. As such, it seems like Lee’s work on the book starts out rather slow. He starts on issue #1 and has to re-tread some of the ground covered in the Rebirth issue, specifically Waller’s motivations. He takes us from the team’s home base at Belle Reve Penitentiary to the Russian facility, giving us a few cool shots in the process. He and Rob Williams also have a really fun take on Belle Reve, where the prison cells are plucked and moved by a giant claw arm.

But once Zod enters the story at the end of issue #2, Lee gets to flex his muscles. He makes Zod surprisingly large, literally twice the size of the other characters (save for Croc). But the ultra powerful Kryptonian against these mostly street-level characters makes for a fun fight, particularly when the big guy goes against Katana. At the end of issue #3, we bring in a few other characters to oppose the Squad. But the good stuff is with the general himself. Issue #4 gives us a cool interaction between Zod and Croc, and a nice climactic moment involving Rick Flagg. It’s not Lee’s best work. But it’s still pretty damn awesome.

The notoriously deadline-challenged Lee was massaged into Suicide Squad‘s a bi-weekly format with a reduced workload. He only had to produce 12 pages per issue, with the rest going to an oversized back-up story spotlighting a particular team member. I suspect most fans will find Gary Frank’s look at Harley Quinn the most enjoyable. While on a mission with Flag, she struggles with some of her more villainous impulses. These are personified, of course, by the Joker. I’m not in love with Frank’s rendering of Mr. J. But his Harley is delightfully expressive in a way that’s exaggerated, but not quite cartoony. Naturally, this compliments both her character and Williams’ script.

But artistically, Philip Tan gets “Best in Show” as far as these back-ups are concerned. In addition to the Rebirth issue, he does the Katana story for issue #3. Tan shows off his versatility with an anime-inspired look at her origin. The script isn’t the strongest, but Tan and colorist Elmer Santos provide visuals that range from haunting to downright heart-breaking.

Rick Flag gets a lot of quality page time here. The Rebirth issue is essentially about him. Williams writes him as unwaveringly loyal, even to his own detriment. He’s the conscience of the team. A good guy tasked with leading all these bad guys. Flag is easy to root for and empathize with. Considering he’s the least flamboyant and colorful character in this book, that’s a good thing.

On the other end of the spectrum, Zod is an oversized caricature of himself, spouting lines like…

– “Prostrate yourself before your general, sub-creatures!”
– “I will boil and eat your magic!”
– “I have incinerated your human flesh and reveled in it’s pungent stench!”

I understand humor is a valuable component here. But c’mon, really? You’ve got Harley for that. You’ve got Boomerang for that. We don’t need Zod for that.

On the subject of weird comedy, this book has a recurring bit about Killer Croc throwing up. Oddly enough, it works. Can’t say I ever imagined Jim Lee drawing that.

The Black Vault represents the first time Suicide Squad has been elevated to a top-tier title with A-list talent. That alone makes it one of the most noteworthy stories in the team’s history. And while this isn’t the best scripting I’ve ever seen, Rob Williams knows how to put together a good Suicide Squad story. One can argue the book has never been in better hands.