Today’s the day, huh? It seems so weird that a year ago we were all salivating over that teaser for Star Wars: The Force Awakens, and now we’re all about to see it in all it’s glory. Or at least what we hope is glory. I mean, theoretically the movie could suck…but I don’t see that happening this time around.

No, I didn’t see it at midnight. I went to midnight showings of all three prequels. That seems like enough. If anybody gives me flack over it, my go-to line is: “You were there when the Force awakened. But I was there to hold the Force’s hair back when it got drunk, started mumbling belligerently about midichlorians and a cartoon rabbit, then said something about “having the high ground” before passing out. My fanboy cred is just fine, thank you very much.” 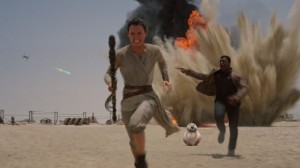 What’s hit home for me in the last few days is that The Force Awakens is more than just a movie. It’s a cultural event. Not just to fanboys, but for average joes. Most people I’ve talked to know when they’re going to see it and with whom. People are going with their family members, close friends, and other loved ones. It’s no small feat when something can connect so many people like that.

You know what I’d be curious to know? What’s J.J. Abrams doing right now? Is he on vacation somewhere with no access to TV or internet? I think that’s what I’d do. Make no mistake about it, the world’s eyes are on his movie right now. It seems like a little bit of privacy might be in order…

I’m trying not to go in with any expectations. Obviously I’ll have plenty to say after I see the movie. But for now, it’s nice just to bask in the excitement that’s sweeping the globe. Hell, the lead story on Yahoo right now is about Admiral Ackbar. How weird is that?

But in the words of the great admiral: May the Force be with us…