The Turtles have an “old days” moment here where they head down to the sewers and fight a bunch of Mousers. It’s just a couple of cutesy lines. But it does serve as a reminder of just how different this series is from the standard TMNT status quo. Instead of four Turtles striking from the shadows, we’ve got five Turtles living openly in a town full of mutants.

As they roam the sewers, the Turtles mix it up with what basically amounts to an undersea monster. It’s played like a horror movie. Kinda fun.

This annual mainly serves as a check-in with our villains. Most notably Shredder, who we haven’t heard much from since issue #100. They color his costume purple and silver, like the old cartoon. I won’t complain about that…

As the cover indicates, they’re doing a symbiosis story with Krang and Leatherhead. Yet another example of how this series continues to bring these characters into uncharted waters. Given how much has been done with the Ninja Turtles universe, it’s pretty amazing to see how much hasn’t been done. 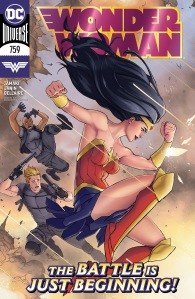 So we’ve got Mariko Tamaki, who wrote Supergirl: Being Super, and Mikel Janin, one of the stars of Tom King’s Batman run. On paper, this new team should be great.

Their first issue is pretty ground level. Lots of flowery narration about what a hero is, what heroes do, etc. My only big problem is that Tamaki gives in to the temptation of putting Wondie in an everyday situation, shopping for furniture, and making it seem foreign to her. She’s been in “man’s world” for so long, yet she has no idea how to shop for furniture? Yeah, right.

How many times have we seen Darth Vader cross paths with characters from the prequels and then get all feelingsy? Enough that I rolled my eyes when Captain Typho showed up in this issue.

However, as someone who read Queen’s Shadow by E.K. Johnston, I appreciated the inclusion of Sabe and another character from that book. It’s a nice little tie-in that doesn’t take anything away from the story being told here.

In this issue we finally get into Jason Todd’s origin story, his connection to Batman, etc. It’s not drastically altered from the comics. But it’s altered just enough to distinguish it. I liked what I saw.

Frankly, I hope they portray Jason Todd as having been with Batman for only a short time. In the DCAU I’d like to see him portrayed more as a tragically failed experiment than a lost son. Again, it would be different. But not so much that it’s unrecognizable. That’s the formula that seems to work best.

We’re still following Jason, Zack, and Trini, despite the events of this issue occurring after “The Power Transfer.” Not a bad thing, but not what I expected either. Especially since they’re getting their own book in a few months.

I’m not sure how I feel about the way Jamal Campbell posed Aisha on the cover. It’s like she’s showing off her butt or something…

We introduce a civilian character in this issue who worries about the holding the Rangers accountable for their actions. Sort of a “don’t trust the Power Rangers” mindset. Very curious to see where that goes.

In almost 20 years, I can count the number of Ultra-Humanite stories I’ve read on one hand. So this story is cool for me in that sense.

This issue, and this team, have a really nice energy. Joshua Williamson is often hit-or-miss. But he, Clayton Henry, and Alejandro Sanchez make for a winning combination with these characters. Not a perfect combination per se, but a winning one. 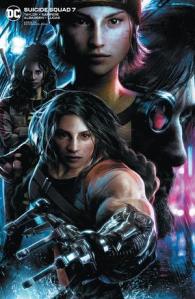 Our Tom Taylor original characters get a new team name in this issue: The Revolutionaries. Not bad. I don’t know how much of a life they’ll have out from under the Suicide Squad name. But still, not bad.

For at least one issue, Taylor brings Floyd Lawton’s young daughter into the sandbox and gives her a a bow and arrow and a hero name: Liveshot. She almost reminds me of a kid version of the Kate Bishop Hawkeye. Interesting… 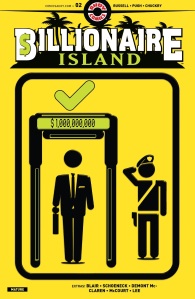 It seems that in addition to the absurdly rich, Billionaire Island is home certain rich, famous, and disgraced. We get an actual Kevin Spacey cameo in this issue. Yes, I wretched. But it’s also a funny little moment.

We haven’t gotten into the bloodshed yet. But the book does crank up the action a little bit with this issue. Something tells me it’s going to be worth the wait.