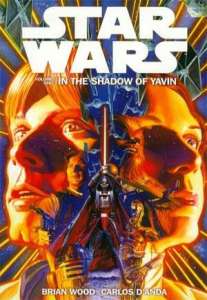 With this new Star Wars series, Brian Wood was going for a throwback to the “classic” Star Wars era. Before The Clone Wars, before the prequels, before all the video games. Wood was going for the Star Wars of the late ’70s and early ’80s, and the universe he fell in love with as a child. That’s a very relatable sentiment for those of us who fell in love with the series before the prequels came out. What Wood and Carlos D’Anda give us in this first volume isn’t perfect. But it is special, in that it offers something very nice for an older generation of fans, without alienating kids in the audience.

One of the ways In the Shadow of Yavin accomplishes this is by keeping the story simple and accessible. Arguably, the only required viewing you need to understand what’s happening here is the original Star Wars film. The book is set a few weeks after the destruction of the first Death Star. While the Rebels have scored a major win over the Empire, they are now on the run after the discovery of their base on Yavin 4. What’s more, there is a spy in their midst, feeding valuable information to the Imperials. Princess Leia promptly pulls together a team of pilots, among them Luke Skywalker and Wedge Antilles, to help expose the spy and find a new base for the Rebellion. Meanwhile, Darth Vader is under immense pressure from the Emperor to redeem himself after the loss of the Death Star. All the while, the name of the Rebel responsible for it’s destruction, Skywalker, weighs heavily on his mind.

As if a Brian Wood-authored throwback wasn’t enough to hook fans, Dark Horse gave fans buying the monthly books a heck of an added incentive with four months of Alex Ross covers. As anyone who’s seen his work knows, Ross is truly in a class by himself. So to see his take on the Star Wars is, to say the least, a treat. We’d seen him do some Star Wars art before. But these covers take the cake, particularly the first one (shown above). The image of Darth Vader with his lightsaber raised above his head is a nice nod to one of the original North American movie poster by Tom Jung, where Luke is in a similar pose. His characters are drawn with unparalleled photo-realism, and the colors are gorgeous. There’s just nobody like Ross. Period.

If you’ve read some of my prior reviews of this series, you know I’m a little more critical of Carlos D’Anda’s work. (Though in all fairness, anyone who has to follow Ross is in a difficult position.) His art certainly fits with the overall tone of the series, and perhaps of Star Wars itself for that matter. His shots of Princess Leia and Luke Skywalker, particularly on the first three pages when they’re in the X-Wing cockpits, are beautiful. As we see later in the book, he also draws a mean Boba Fett. And when he’s tasked with drawing all the trademark Star Wars hardware, he does a beautiful job. In issue #3 he’s tasked with drawing a two-page spread of the under-construction Death Star II, as it’s being guarded by four Star Destroyers (including Darth Vader’s Super Star Destroyer). The result is beautiful, and so detail-rich one can only imagine the hours of labor that went into it. So I’m by no means saying D’Anda does a bad job. The majority of his work here is awesome. 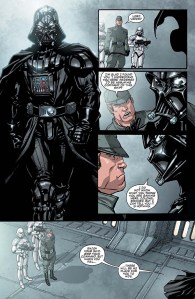 However, I’ve never been able to enjoy the way D’Anda draws Darth Vader. Some of this may be subjective, but I think D’Anda’s Vader channels a bit too much of the David Prowse bodybuilder vibe. This is especially apparent in issue #1, when we see Vader walking toward an Imperial officer (shown below). What is that pose, exactly? He looks like he’s stomping down an evil runway. I’m also not a fan of the way D’Anda draws the classic Darth Vader death mask. He seems to distort it to make it look angrier. But for yours truly, that mask is so distinctly ingrained in my memory, that any kind of stylized take on it just seems categorically wrong.

D’Anda has a similar problem with C-3PO. He has trouble nailing down the robot’s face, and in his first few appearances his positioning and posture seem a bit off. Thankfully, this issue corrects itself a bit as the issues go on. In any event, Threepio’s appearance doesn’t effect the book nearly as much as Vader’s, as the latter gets much more page time.

I give Brian Wood a lot of credit for making Luke a teenager in this story. It’s much more in line with the character we saw in A New Hope, and makes sense for the story being told here. One of the very first ideas Wood explores is Luke’s uncertainty about his feelings, his future, and what the next step is. Twice in the first issue alone, we see Luke’s father’s lightsaber used as a symbol of his uncertainty, and his unavoidable destiny. And yet, we also get to see him have a little bit of fun. He has an off-panel hookup with one of his fellow pilots, to Leia’s apparent dismay. This of course, raises various unspoken questions about Luke and Leia’s feelings for one another, which of course, most Star Wars fans know the truth about anyway. But it’s still interesting to see the characters try and figure out.

I also credit Wood for not making use of the easiest Star Wars parlor trick in the book. It’s something I’ll call FLA: Frequent Lightsaber Activation. The prequels, of course, were big on FLA. The trouble is, FLA ruins the novelty of the lightsaber, and waters down the coolest weapon in all of science fiction and fantasy. While we do see the weapon referenced in scenes with Luke, we only see a lightsaber actually used once, very briefly, in a scene where Darth Vader kills an Imperial officer. Seeing the weapon used so sparingly is reminiscent of the classic trilogy, A New Hope in particular. It also speaks to Wood’s talent as a writer.