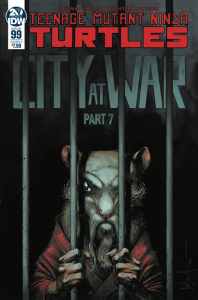 This damn thing cost $7.99. I’ve been following this main TMNT series since the beginning. But damn. That hurts.

But devil’s advocate: They jam a lot in here. Dozens of heroes and villains battle, with the fate of New York City at stake. Not to mention the lives of various mutants, and even children.

It all culminates in…well, I can’t say I knew for sure they were going in this direction. But after issue #50, I had a pretty good feeling a certain character would be on his way back by now.

Again, no Kylo Ren in this issue. Not even a closing shot of him in the last few pages. Lame. Sauce.

On the way to The Rise of Skywalker, Allegiance basically tells us two things: What the Resistance has been doing since the Battle of Crait, and how they obtained some of the resources they’ll undoubtedly have in the movie. It’s not the most fun Star Wars book you’ll ever read, and I doubt it’ll hold up to repeat readings. But as a little appetizer for the release of Episode IX, it works fine.

This issue quick-fires a bunch of mini-stories at us, narrated via Alfred’s journal. “Everyday” moves day by day from April 7 to April 24.

I’d like to think these are a bunch of cooky ideas Tom King had while brainstorming for his Batman run, but couldn’t squeeze in. Based on what we’ve seen, some of these ideas really feel like his. Batman fights a dragon, takes on an MMA fighter for charity, solves a whodunnit, etc.

Mike Norton tags in for Jorge Fornes for several pages. So we got from a David Mazzuchelli, Year One-ish look to something more akin to Michael Lark.

Tacked an extra one down on the end here. The most recent issue of Superman. But of course, in the spirit of the Rise of Skywalker hype, we begin with Allegiance… 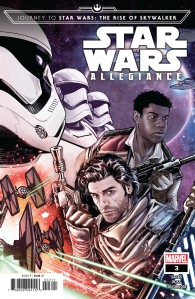 Leia, Rey, and some of the Resistance are still on Mon Cala in this issue. Because it’s largely an underwater planet, Leia has to wear the equivalent of a scuba suit. Imagining an older Carrie Fisher in an outfit like that is…weird.

The “B story” in Allegiance has been about Finn, Poe, and BB-8 stealing weapons for the Resistance. Sacks writes their chemistry very well. Well enough, in fact, that I felt a pang of sadness that they didn’t end up being romantically involved. Yeah, I was on that team.

No Kylo Ren in this issue. Bummer. 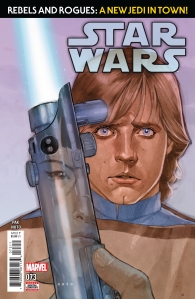 This volume of Star Wars is going out strong as we head toward its issue #75 finale. Greg Pak knows how to weave the multi-strand rip-roaring adventure, as all of our main heroes fight for their lives.

But for yours truly, the star of this “Rebels and Rogues” storyline has been Phil Noto. He’s been one of my favorite Star Wars artists dating back to the build-up to The Force Awakens. His “sketchy” style is a lot of fun, and he nails all the likenesses. As far as I’m concerned, he’s welcome in this galaxy any time. 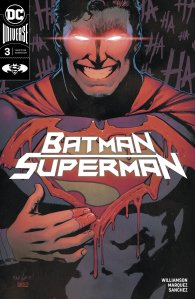 Unlike many, I’m not really into the Batman Who Laughs, or much of the Metal stuff. But the premise of that character “infecting” six characters across the DCU, and our two heroes having to solve the mystery of who they are was enough to draw me in.

But the way Williamson has executed it thus far, it’s not so much a mystery as it is them happening upon each victim. It’s still a cool idea. I just wish they’d dig a little deeper into it. On the upside, it’s great to see Marquez drawing the World’s Finest. 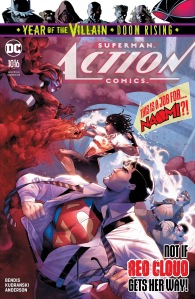 I absolutely adore the framing device for this issue. A Daily Planet reporter does man-on-the-street interviews to recap a fight between Superman and the Red Cloud. Bendis is as good as almost anyone at playing up the journalism element in Superman’s world.

A Szymon Kudranski comic that’s this colorful takes some getting used to. There’s nothing wrong with it. But his M.O. is typically on the dark and gritty side. Type his name into Google Images. You’ll see what I mean. 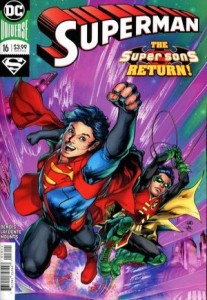 I’m not sure I’ve ever seen Superman look quite so…blocky. I know LaFuente’s style is more on the cartoonish side, and generally I like what he turns in. But the Superman we see here looks more like a Superman action figure than the Man of Steel himself.

This issue gives us the inevitable reunion between Superboy and Robin after Jon Kent’s trip into space, which aged him a few years older than Damian. Bendis gives us what you’d hope to see here. The initial awkwardness, some hijinks and a feel-good exit. A strong issue, blockiness notwithstanding.

Whether you like this J.J. Abrams stuff or not, I can say his name value got me to buy a Spider-Man comic again.

Ben Parker got into this dad’s old costume pretty quickly. But I buy his motivation: He does it to impress a girl. I mean, c’mon! He’s a ninth grade boy. That’s usually about as complex as their motivations get.

Sara Pichelli continues to turn in not just awesome art, but art that’s distinctly different from her work on Miles Morales. Needless to say, she’s become one of the definitive Spider-Man artists of this era.

I’m not the world’s biggest Tony Daniel fan. But the switch from his art to John Romita Jr’s has been jarring.  The look and texture of the story has changed halfway through. That’s rarely a good thing.

When Tom King tries to pull the “Batman had a plan all along” card, my initial was, “I don’t buy it.” Also, King makes the Flashpoint Batman’s fighting prowess so exceptional it almost becomes cartoonish. Especially with how it’s executed.  Maybe these opinions will change once the story ends, or I have more time to absorb it. But for now, they’re losin’ me…

I’m finding myself wanting more Kylo Ren in this book. Especially after reading that Snoke one-shot they put out a few weeks ago, where the two characters go to Dagobah. Still, I understand why they might not be able to do that, as we’re obviously building to the movie. We do, however, get to spend some quality time with Rey, which is nice.

We learn in this issue that Admiral Ackbar has a son, but only met him once because “his focus was elsewhere.” Apparently the only good dad in the galaxy was Bail Organa… 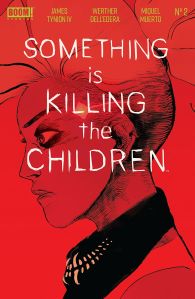 I’m digging this book so far. Attention-grabbing title aside, Tynion, Dell-Edera, and the rest of this team have started a great horror-mystery. It’s got kind of a Stephen King/YA novel/Twilight Zone feel to it.

As the mystery of this supernatural child-devouring menace unfolds, the book manages to entice the hell out of you with how gorgeously grotesque some of these things are. The intrigue there, along with our likable female anti-hero, makes it easy to come back for more.