I do need to make a correction from last week’s post. The “first” Superman costume from the premiere did not make its debut in The New Frontier (although that’s primarily the work I associate it with). It’s from all the way back in the Max Fleischer Superman cartoons of the ’40s. Whoops. Hey, what do you expect? I’m not Superman, y’know…

Captain Luthor says, “We need to stop Kal-El before he does to this world what he did to mine.” It looks, then, like Captain Luthor is an alternate-universe Lex Luthor. In the comics, the most prominent alt-universe Lex is the one from Crisis on Infinite Earths. Alexander Luthor, as he’s known, is that world’s only hero, fighting against an evil version of the Justice League. Is that what we’ve got here?

There’s a city on Krypton named “Kryptonopolis?” That’s pretty dumb, actually. I wonder where the city of “Earthopolis” would be…?

We see the artificial intelligence Jor-El, played by Angus Macfadyen. I imagine it’s more daunting for an actor to play that role than we imagine. After all, a large portion of the audience associates that role with Marlon friggin’ Brando. No pressure there.

Question: Clark takes Jordan to the Fortress of Solitude to learn about his Kryptonian heritage, but not Jonathan. Why? Odds are Jonathan is manifesting powers too, right? They’re just different than his brother’s. So why sew the seeds for jealousy by taking one brother and not the other? Also, they couldn’t have waited until after school to take Jordan to the fortress? What, are they worried about him missing dinner or something?

I’m finding myself wanting to see more personality from Bitsie Tulloch’s Lois Lane. It feels like she’s missing a certain spunk, or killer instinct. I suppose you can argue this is an older, more subdued version of Lois. But I’m not sure I buy that. Granted, it could also just be Tulloch growing into the role.

So now we’ve had another episode to let this Social Anxiety Disorder thing with Jordan sink in. Much like I’m wishing Lois had a little more spunk, I’m wanting to see Jordan be more socially isolated. After all, he kissed a girl in the show’s very first episode. That’s not to see everyone experiences social anxiety the same way, or that it should be portrayed uniformly. But if you’re going to say the kid has Social Anxiety Disorder, why not really dive in and explore it? 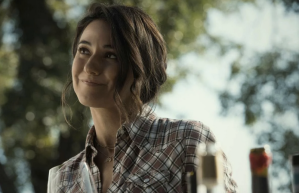 Lana not knowing Clark’s secret takes some getting used to. It’s not necessarily a bad thing. But she’s almost always portrayed as having been in on it since Clark was a teenager. And even having a cunning nature to rival Lois’ at times. Thus far, Superman & Lois has portrayed her more like a ditzy homemaker.

That shot of Superman standing with the American flag in the background was a nice touch. I’m a sucker for cheesy stuff like that.

Lois quits The Daily Planet after an editor re-writes a story of hers, and joins The Smallville Gazette. I’ve always been a fan of the journalism-oriented side of Superman’s world. So seeing Lois empowering a small community newspaper is pretty cool. I’m also liking the Chrissy Beppo character. Here’s wondering what she and Lois can learn from each other.

By Rob Siebert
Suddenly Wants to Be a Farmer 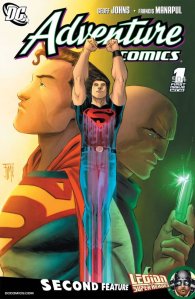 I remember picking this issue up from Graham Crackers Comics in Downer’s Grove, IL, and feeling my jaw hit the ground when I opened to these pages. It’s been over a decade, and this image has never left me.

As much as Francis Manapul shines here, the real star is Brian Buccellato. That sky is absolute magic. Corny as it is (See what I did there?), how can you look at that and not feel the morning breeze on your face?

There were some additional warm fuzzies here because Conner Kent, a.k.a Superboy, had been gone for a couple years. He’d been killed off in Infinite Crisis, then brought back in Final Crisis: Legion of Three Worlds. Both written by Geoff Johns. When Johns was writing Conner in Teen Titans, he was living with the Kents in Smallville and wasn’t happy about it. So the line, “I can’t believe I ever hated Smallville,” adds the extra exclamation point to the image.

In a company that likes to toss around the term “all star,” Jae Lee is a true all star. His dark, gothic style is usually fantastic, and it’s seemingly tailor-made for a character like Batman. But is Lee the right guy to put on a Batman/Superman book? I had my doubts, and I still do. But there is some good stuff here…even thought some of it’s rather confusing.

This issue shows us the first one-on-one meeting of Superman and Batman, first in civilian form, then in costume. To Greg Pak’s credit, his character work is awesome. His opening scene is particularly strong. Clark Kent travels to Gotham City to investigate the murder of some employees at Wayne Enterprises. He stumbles across a boy seemingly being beat up by some bullies, as Bruce Wayne (in a familiar disguise from Batman: Year One) looks on. He gets in Bruce’s face for not interfering on the boy’s behalf. But it seems the would-be victim was simply luring his opponents into a trap. From the get-go, this issue captures the source of Superman and Batman’s constant conflict, and the reason these two characters work so well together despite their differences. It’s Clark’s hopeful idealism paired with Bruce’s cynical reality. Then we go into a beautifully formatted two-page spread, which shows us what the two characters have in common: The quality of people who raised them. It’s a fantastic start. 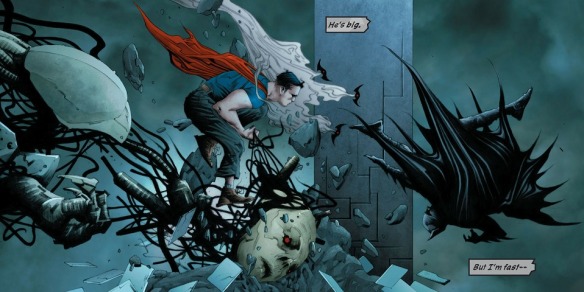 But from there, things get weird. Batman uses some weird robots to try and wrangle Catwoman, who’s being controlled by a new villain called the Trickster (through she hasn’t been referred to by that name in-story yet). Then Superman flies in and the whole thing goes to hell. From there…I’m not sure what happens. Suddenly they seem to know eachother (Batman calls him “Clark”), and Batman is wearing a slightly different outfit. And then we get an appearance by someone we definitely weren’t expecting.

At this point, it seems a lot of this is supposed to be a mystery. But the whens and the wheres of this issue are confusing. In Justice League: Origin, which was written by two of the company’s co-publishers, mind you, we know that most of the League is meeting one another for the first time. And yet, this issue indicates that Superman and Batman met during Clark’s early years as a hero, when he was still wearing jeans and a t-shirt. And YET…later on in the issue Batman calls him by his civilian name and asks: “What’s with the jeans?” What page are we on? Are we in some kind of weird time warp thing? We need to clear this up pretty fast. As in, tell me what this is by next issue, or I might be gone…

As I mentioned, I’m not completely sold on Jae Lee’s suitability for a book which prominently features Superman. His Clark Kent looks good, I’ll give him that. I also appreciate that his Superman doesn’t look like an Abercrombie and Fitch model, or a competition bodybuilder (I’m looking at you Kenneth Rocafort). But for instance, there are a few panels (shown above), where he draws a young Clark Kent in Smallville. I think this is supposed to be your typical contrast of sunny Smallville and shadowy Gotham. But Lee’s shadowy style, combined with June Chung’s color choices, give it a much too dreary look. He’s got the right idea, but it doesn’t really fit the way he does things. It can be argued the same is true when we get to red cape time. But it’s tough to say so definitively, as midway through red cape time, Ben Oliver takes over. Yeah, there’s a little tidbit they left out of the marketing campaign…

For longtime comic book readers, it’s tough to even talk about this issue without thinking about the old Superman/Batman series, specifically the stuff Jeph Loeb and Ed McGuinness did with the first several issues (the story which would eventually be collected in Superman/Batman: Public Enemies. The first issue of their run was published almost 10 years ago. That issue also had a writer with a great understanding of both characters’ voices, and an artist whose style might have gone a little too far in one direction for a lot of peoples’ tastes. While Lee likes drawing skinny pale people, McGuinness likes drawing big muscular balloon people. But Superman/Batman #1 is 10 times what Batman/Superman #1 is. It had great pacing and flow, played up the dynamic between our main characters in a way that was both insightful and fun, and it put them against Lex Luthor, a bad guy we all love to hate. 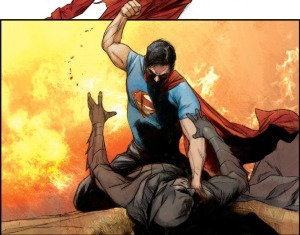 But while that issue was built upon more than 15 years of story continuity, the New 52 initiative is less than two years old. In Batman/Superman #1 all the iconic Superman and Batman stuff is there, but certain specifics in terms of backstory are still being established. Heck, after we close this first issue we’re not even sure where we are on the  New 52 timeline. All that stuff is still being established in other books. Superman/Batman #1 kept things simple, which definitely helps when it comes to first issues.

Hopefully Pak and Lee (and whoever else is pencilling…) will fill in some blanks next issue. Until then, Batman/Superman #1 is in the “undecided” category for me. That’s a shame, as for a longtime DC Comics fan like me, this series should be a no-brainer.