By Rob Siebert
Talking about Friday on a Wednesday

Well how about that. Not only is this train still runnin’ despite weekly comics not hitting shelves, but we got two out in one week!

Courtesy of Panel Syndicate comes Friday, a “post-young-adult” story about two kid detectives (think Encyclopedia Brown or Harriet the Spy) who’ve hit adolescence. But when Friday Fitzhugh comes back from college, discovers she has at least one more mystery to solve with Lancelot Jones.

Lancelot Jones. Now that is a character name.

Thus far, Friday is your standard grounded and gritty Brubaker story. But I’m in love with the idea of child detectives grown up. The “glory days” of a certain innocence are over and now these kids, these former super-sleuths, have to face the real world.

Holy crap. Anybody got any weed?

Apparently part of Mike Allred’s Madman Universe, X-Ray Robot is about a scientist who uses a robot to explore new dimensions. But an unexpected twist leaves him with a dilemma he never dreamed of.

I’m a casual Mike Allred fan, so I’ll have my eye out for this book once comics are hitting the stands again. It’s an…experience, to say the least. 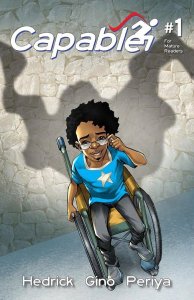 Capable #1 is very much a low-level indie comic. It certainly reads like one in terms of dialogue. I understand high-schoolers have potty mouths. But being profane for profanity’s sake is obnoxious.

That said, the concept is compelling. Some kind of otherworldly occurrence gives disabled people around the world superpowers. Naturally some, like our main character Derik Davidson, use these abilities for good. Others for evil.

I’m inclined to give issue #2 a look. I want this book to live up to its potential. The only thing holding it back right now is some needlessly bush-league language.

A black and white comic about a fat convenience store janitor in an outer space arena fighting a giant baboon and a robot that makes awful puns?

Space is Awful reads like Clerks meets Coneheads meets a Simpsons Halloween special. It’s a comic that’s happy to bask in its own ridiculousness. I wish more comics could have the sense of unabashed fun that this one does. Very curious to see how they try to up the ante with issue #2.