***As Nightwing’s public profile grows higher via the Titans TV series and the upcoming Gotham Knights game, “Who is Nightwing?” looks at Dick Grayson’s early solo adventures after stepping out of Batman’s shadow.*** 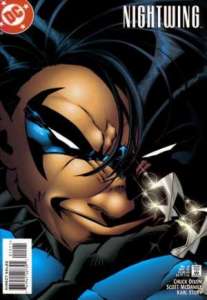 This first volume of Nightwing has historically been collected in chunks of roughly 8-10 issues. Issues #1-8 are usually the first chapter, and this collection of issues #9-18 and the first annual can be seen as a second chapter. To that mindset, I’d call this the “Villains Chapter.” Dixon, McDaniel, and the team have set up Dick Grayson’s new status quo. Now it’s time to create some new villains for him to fight, as well as bring in some familiar faces from Gotham.

In issue #7, we learned the identity of Bludhaven’s new crime lord: Roland Desmond, a.k.a. Blockbuster. For my money, Blockbuster’s effectiveness as a lead villain largely depends on how much perspective you have as a comic book reader. If you’re simply reading these issues at face value, as I was when they first came out, then he’s fine. A big bad crime boss who, unlike a Carmine Falcone or a Rupert Thorne, can actually be a physical threat to our hero. But with the benefit of hindsight more than two decades later? He feels like an attempt to imitate Wilson Fisk, a.k.a. the Kingpin over at Marvel. But I’ll say this much: He’s a good imitation. And Scott McDaniel is great at juxtaposing this giant monster in a suit with the ultra fast and flexible Nightwing.

As the book continues to develop a mini-rogues-gallery for Nightwing, the book brings in a few icons to help hold down the fort. We see Man-Bat, Deathstroke, and the Scarecrow. The latter is particularly effective, as it doubles as an opportunity for readers to dive into Dick’s psyche and get to know him that much better. You wouldn’t know it by looking at him, but our former Boy Wonder is living with a hell of an inferiority complex. To that end, I love how Chuck Dixon incorporates Bruce Wayne choosing Jean Paul Valley to take his place as Batman during the Knightfall storyline. It’s a nice way to illustrate that despite wanting to be his own man, Dick still cares deeply about what Batman thinks of him.

We spend about an issue’s worth of pages experiencing these Scarecrow-induced hallucinations with Dick. Some of it’s played for surreal humor, which wouldn’t have necessarily been my first choice. But it gets the point across. Less effective is Scott McDaniel, Karl Story, and Roberta Tewes’ visual take on the scenes. I said it last time, and I’ll reiterate here: This team is so much better suited for action scenes than the quiet, existential stuff. Our opening issue, which sees Nightwing evading gunfire in a shopping mall? A delightful read that has a great visual flow to it. Dick Grayson confronting his worst nightmares? Meh.

Another strike against McDaniel, along with other artists of this era, is what I’ll call “shoulder horns Batman” (shown below). For whatever reason, in the ’90s and early ’00s it was acceptable to put pointy horn-looking gimmicks on Batman’s shoulders. I think the idea was to make him look more menacing, and even a little demonic. But I’ve always hated it. Thankfully it gradually went away, and never made its way into any of the on-screen versions of the character.

On the subject of ’90s costumes, I didn’t even recognize Deathstroke at first. I’d completely forgotten about his black and blue suit…

Though it might be blasphemous to some, I prefer what Greg Land turns in on Nightwing Annual #1. The final product is cleaner, and makes for an enjoyable read.

These issues are also where we start to pick up the pace on the slow-burn romance between Dick and Barbara Gordon/Oracle. Chuck Dixon was one of, if not the master of writing the chemistry between these two. It’s not particularly subtle. Dick and Barbara are fairly flirtatious whenever he comes to her for help on a case. At one point, Dick practically talks openly about a potential romance with her. It’s more a case of Will they?/Won’t they? To his credit, Dixon is able to strike a really nice balance in these issues. He makes us want to see Dick and Barbara get together. But at the same time, he’s able to write in some chemistry between Dick and his building superintendent without making either character look like a heel. On paper it’s a very precarious love triangle. But Dixon pulls it off beautifully.

What’s more, it wouldn’t be long before Dick had yet another love interest. Sparks were about to fly as Nightwing crossed paths with none other than Helena Bertinelli…the Huntress!