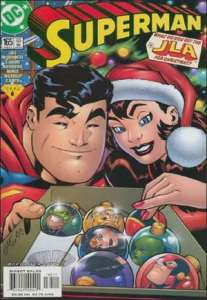 Don’tcha hate it when your arch rival becomes President of the United States? Man, that sucks…

We all knew tough times were ahead for Superman after the 2000 presidential election. In one of their wildest stunts, which actually stuck for a few years, DC Comics opted to make Lex Luthor the President of the United States. Naturally, this was a huge blow for the Man of Steel. When he’s written well, Superman is essentially a man of the people. So what does a man of the people do when the people make a potentially catastrophic choice?

For Superman, the answer was turning to those he trusted. Not just his wife, but his friends, colleagues and confidants in the Justice League of America. Superman #123 takes place in the aftermath of Lex’s election, and sees Superman visit with each member of the League. As it’s the holiday season, he gives each one a small gift. This issue is drawn by a number of artists, each of whom pencils a particular encounter. But naturally, we’re focusing on the Superman’s time with Batman, which is drawn by Joe Madureira. The scene is only three pages long. But it’s an interesting glimpse into how the Superman/Batman dynamic works. 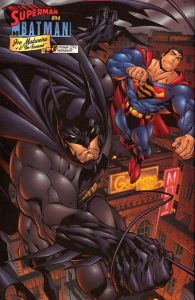 Clark and Bruce had disagreed about how to handle Luthor running for president. Batman had some even more bad blood than usual with Luthor due to his involvement in the events of the recent No Man’s Land storyline. When it looked like things were turning in Luthor’s favor, Bruce wanted to dig up dirt to use against Lex, whose reputation was squeaky clean in the eyes of the public. But Superman questioned the ethical nature of such a move, and insisted they trust American voters to do the right thing.

The tension between the two is obvious when we open the issue. Batman’s cartoony scowl aside, while all the other meetings started with friendly dialogue, this one begins with silence.

Bats then asks: “Wasn’t it you who said we have to put our faith in the America people to do the right thing?”

Swallowing his pride a bit, Clark then gives Bruce a small magnifying glass (Get it? He’s a detective.), with the words: “This…is from Lois.”

Batman replies with a thank you. Then we get the line that truly makes this exchange special: “When the time is right, we’ll take Luthor down.” 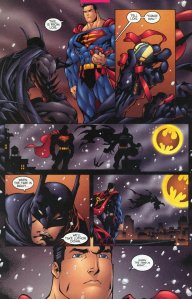 In the final panel, after Batman has left, Superman repeats quietly to himself: “When the time is right…”

This may seem fairly small and insignificant. But to me it illustrates the compromise that makes the partnership between these two men work. It’s that balance of optimism and cynicism. Batman wasn’t wrong to be wary the country potentially choosing Luthor. But Superman’s ethical argument wasn’t wrong either. Superheroes shouldn’t necessarily have to stoop to playing dirty. Especially when it comes to politics, which quite frankly, is dirty enough already.

Still, Luthor won, and Superman had to eat crow. But in the end, Bats still trusts Superman enough to work with him in defeating this enemy. And Superman trusts him too, despite their differences.

Clark takes Bruce’s words to heart as the issues ends on the next page (pencilled by Ed McGuinness), as we see Superman and Lois Lane beginning a brief vacation in the Bottle City of Kandor. Tough times are indeed near. But after spending so much time with his confidants, Superman chooses to take some quality time with his closest confidant of all.

Both our heroes look pretty jacked up here, which isn’t really my cup of tea. But as a style choice, it’s fine. The only thing I don’t appreciate here is the aforementioned scowl on Batman’s face, which stays with him the whole issue. That’s not to say he has to get sentimental, or even look particularly happy. But Superman’s expression changes in the scene. So why can’t Batman’s?

On it’s own, this scene stands up just fine. But it’s even better when you consider taking Luthor down is exactly what our heroes do a few years later in another Jeph Loeb story, Superman/Batman: Public Enemies. One might consider this scene a nice little prelude to that story. Luther may have gotten himself elected. But in the end, justice came calling.

For more “Best of Batman & Superman,” check out our look at Gotham Knights #27.