Green Lanterns almost makes me sad that there are human ring-slingers besides Jessica Cruz, Simon Baz, and Hal Jordan. This feels like such a natural next chapter in the Green Lantern saga. The next generation learns to overcome fear, while Jordan mentors them from afar. Makes perfect sense to me.

Rage Planet sees Earth’s newest Green Lanterns, Simon and Jessica, become co-protectors of Sector 2814. But Simon isn’t convinced he needs a partner, and Jessica is plagued by her crippling anxiety. Not exactly ideal circumstances. Especially when Atrocitus and the Red Lantern Corps are about to bring “Red Dawn” to Earth. Simon and Jessica will soon have no choice but to work as a team.

Green Lanterns has its share of problems. It feels a little bit padded to fill the six-issue main story, has a revolving door of artists, and essentially features a stock story about reluctant partners. But Sam Humphries does some terrific character work in this book, particularly when it comes to Jessica Cruz.

A Green Lantern who suffers from clinical anxiety seems like such a natural development that I’m surprised it’s taken this long for us to get one. The entire mythology revolves around the idea of overcoming fear, after all. But Humphries makes up for lost time by taking us inside Jessica’s head and perfectly conveying her anxiety. The constant second-guessing, the belief that she’s not good enough, the panic attacks, the isolation (she didn’t leave her apartment for three years prior to becoming a Lantern). Hokey as it may sound, as someone who has dealt with anxiety myself, Jessica makes me feel represented. She’s a tremendous addition to the Green Lantern mythos.

This series gets us recaquainted with Simon Baz, who in many ways fell to the wayside prior to the Rebirth relaunch. His character can be tough to nail down, as he’s stubborn and distrustful. But also overly confident at times. I’ve always thought him carrying a gun despite wearing a Green Lantern ring was silly. I understand the need to distinguish him from the other Lanterns, as there are so many of them. But logically, that’s like keeping a pocket knife with you in case your chainsaw breaks down. Still, he and Jessica make a good buddy cop duo. I’m hoping Humphries resists making them a couple.

On a surface level, the Red Lantern stuff makes for a fine first arc. But there’s not much to it. It’s essentially Atrocitus wanting to make Earth a giant ball of pulsating rage.  It’s not nearly as interesting as the Phantom Lantern material, which really gets moving in the next volume. But fans generally know who/what the Red Lanterns are, and they have a little mainstream recognition from different TV shows and video games. So it makes sense from an attention-grabbing perspective. The book’s most interesting moment with the Red Lanterns involves Simon temporarily relieving Bleez of her rage. It’s a nice “What have I done?” moment. 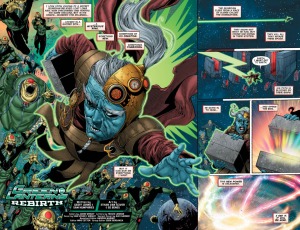 Ethan Van Sciver tags in, and then quickly tags out again on the pencil for the initial Rebirth issue. There’s been tremendous value in his work on these characters since he did the original Green Lantern: Rebirth story in the early 2000s. I’m always impressed by his attention to little details. His images never look real, per se. But there are often enough little details to evoke a feeling of realism, even when he draws weird aliens. Case in point: Our little blue friend in the image above. Look at the little details in his helmet, his five o’clock shadow, the wrinkles in his sleeves. You don’t necessarily notice things like this at first. But go a long way in making Van Sciver stand out.

Various artists start and stop in this book. But the one with the most page time is Robson Rocha. Like Van Sciver, his work is very detailed. His facial work isn’t exactly subtle, but it makes an impact. Jumping ahead a bit, that’s part of what made his work on Green Lanterns #9 so good. His rage-possessed civilians look downright beastly. So much that at certain points he nearly veers into comedic territory. He also draws Jessica and Bleez a little too sexy at times. But by and large, he’s a solid fit for this series.

This book doesn’t break a lot of new ground in terms of the Green Lantern mythos. But the buddy cop format is charming as hell, and the characterization of Jessica Cruz is terrific. Relative to some of DC’s other offerings, Green Lanterns isn’t making a lot of noise in terms of sales. But it’s bound to be a pleasant discovery for readers.

Sam Humphries may be the best writer we’ve seen on a Green Lantern book since Geoff Johns. This Green Lanterns title has been that good. With Jessica Cruz he’s given us one of the best portrayals of clinical anxiety I’ve seen in comics

But this issue brings up an important question…at what point have you pulled too many heart strings?

Green Lanterns #9 introduces us to Frank Laminski, a pilot who desperately longs to be a Lantern after being rescued by Hal Jordan. A middle child perpetually in second place, Frank becomes obsessed with becoming Earth’s next Green Lantern. But after years of working to overcome his fears, and seeing others get power rings, Frank becomes more and more desperate. Until he learns of the Phantom Ring, a power ring anyone can wield. But to get it, he’ll have to go through Simon Baz and Jessica Cruz.

Frank Laminski is heartbreakingly relatable. At times it’s almost brutal. We see his torment, his rejections, his almost pitiful desperation, and finally his diminished resolve. It’s all clearly field by a need for personal validation. Humphries channels the same emotions he used with Jessica, particularly with the line, “Please, I need to know. Am…am I wasting my life?”

What makes it all the more crushing is that Frank has such hope. He says things like “I believe a man has the power to change his whole life. All you have to do is push yourself beyond what you thought was possible.” And yet, his situation is largely a hopeless one. Hope is powerful. But it isn’t everything…

Humphries weaves Frank’s story nicely into the Green Lantern mythos. We see his desperation grow as he watches John Stewart, Guy Gardner, and the others debut as heroes. He also pokes some innocent fun at the number of Green Lanterns Earth has. (“There were plenty of rings to around around, it seemed.”)

My question about heartstrings relates to the scene where Frank is at his lowest point, and seems to be praying to the Green Lantern rings to choose him. At that moment, a Green Lantern ring appears to him, and is about to welcome him to the corps. The ring then changes its mind, realizes its made an error, and travels to Guantanamo Bay to find Simon Baz. I loved seeing Frank’s resolve finally break, and I love that he thinks the rings are watching and can hear him. But is the appearance of the ring a little too on the nose? It works, and it conveys that Frank might actually be capable of wielding a ring. But is having the ring tell him “you are not capable of overcoming great fear” too overindulgent? I suppose it’s a matter of taste.

This is my first exposure to Robson Rocha. I can see traces of Ivan Reis and Doug Mahnke on these pages, meaning we’ve got something very consistent with two widely successful Green Lantern artists. He makes Frank very expressive. It’s very easy to feel Frank’s hope, pain, and agony, because it’s very accessible. And as always, colorist Blond treats us with a gorgeous palette.

Even as someone who enjoys Hal Jordan, Guy Gardner, and a lot of the other Green Lantern “legacy” characters, I’m almost sad Green Lanterns isn’t the only GL book being published right now. This feels like the next logical chapter of the ongoing Green Lantern saga, and we’re seeing some tremendous character work. This is Sam Humphries’ first go-around with these characters and this world. But to his credit, it feels like he’s been with them for years.