You know how I can tell I’m becoming a crotchety old man? I’m getting angry at teenagers for being on their smartphones too much. The other day I actually coined the term, “screen-craving mouth-breathers.”

So yeah, Nathan Hale’s One Trick Pony was up my alley.

My first exposure to Nathan Hale came at this year’s annual Children’s Literature Breakfast held by Anderson’s Bookshop in suburban Chicago. He did a very funny presentation about the power that pictures and visual content can have in the learning process. Using an overhead projector and a marker, he told us all his animated version of the Lewis and Clark story. It was very much in the vein of his Nathan Hale’s Hazardous Tales series of graphic novels for kids, which take the same sort of look at history. If you get the chance to see him, I highly recommend it.

One Trick Pony is something different. It’s an original, post-apocalyptic graphic novel about a world where electronics are scarce. An alien race, which humans call “Pipers,” have stripped the Earth of its machines. As such, the world has reverted back to horses and spears. Our main character, a young girl named Strata, lives with a mobile caravan collecting and preserving technology. One day, on a routine hunt for tech, Strata and her brothers find a golden mechanical Pony called Kleidi. But the Pipers are always lurking, and Kleidi is literally a giant golden target. 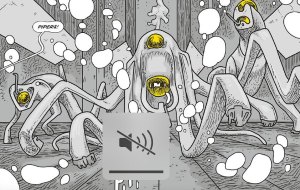 I can’t find a lot of bad things to say about this book. It’s sort of like War of the Worlds meets The Hunger Games meets…whatever you’d consider a modern popular cartoon to be. I’ll say The Simpsons for lack of a better example. It’s witty and plainly spoken. It also has a nice moral in there about paying the piper for the luxuries we have, ergo the creatures (shown right) being called “Pipers.” I like the idea of these alien invaders having a moralistic agenda. In the end, we find out that’s not entirely the case. But I appreciate this story being given to youngsters.

Hale’s style is very simple, with a “sketchy” feel to it. But he’s more than capable of being a rock star on the pencil, especially when he gets to draw the caravan that’s carrying all the hidden tech. All the little details are awesome. It’s almost a contrast to the way he draws the human characters.

The story is presented mostly in grayscale. The exceptions are shades of yellow, a tiny bit of brown for skin tones, and deep gold, the latter we see on the Pipers and Kleidi. The sky is almost always a faded yellow, which with the gray gives us a very desolate feel.

Oddly enough, the element in this story that seems the most forced is Kleidi, the titular robotic horse. Kleidi and Strata have a boy-and-his-dog sort of bond, which I guess I can buy. But Kleidi being a robot thins out that premise, especially since we never find out exactly what this robot is or where it comes from. So our ending, which directly involves Kleidi, loses some of its edge because she’s almost more of a vessel than a character.

To use a Star Wars analogy, it’s like Han Solo’s relationship with the Millennium Falcon. He cares about it. But not in the same way he cares about, say…Chewbacca. Kleidi feels like Han and the Falcon, and I think it wants to feel like Han and Chewie.

What’s more, the world Hale creates is so much more interesting than the Strata/Kleidi dynamic. So interesting that I was actually disappointed when the story ended with the loose ends tied up, and a nice little bow on it. I was hoping we’d get a sequel to Kleidi. Especially considering things end rather abruptly. I’m not an advocate of every story being stretched into an epic trilogy. But there could have been more to explore here.

But perhaps I’m being too critical. Kleidi is a very good read, and hopefully the start of a new path for Nathan Hale. He’s a great history teacher. But he’s also got a knack for writing some history of his own.