***In “Astonishing Art,” we spotlight a particular work or series of works from a specific artist or creative team. The only requirement? That the work be simply and purely astonishing!*** 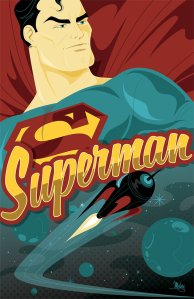 Mrs. Primary Ignition and I stumbled across Mike Mahle’s table at C2E2 this year, and were immediately struck by what we saw. Specifically, posters featuring his digital renderings of DC Comics superheroes in their unabashedly colorful glory. These pieces celebrate the iconic looks of characters like Superman, Batman, and Wonder Woman, with a delightfully retro (and often retro-futuristic) flair.

We purchased a print of Mahle’s take on Superman, as I found myself hopelessly drawn to it. In an era where so many want to darken the character, or make him a moody brooder, Mahle casts the Man of Steel in the idealistic light he was meant to be shown in. This is the true face of Superman.

Mahle actually sells a collected book of these DC posters, which is the size of a standard comic book. It’s got his tributes to most of the big DC names, as well as some of the lesser known characters. Booster Gold, Power Girl, Captain Atom, etc.

Particularly popular at the convention was Mahle’s take on Batman: The Movie, with Adam West and Burt Ward (shown left). Like so many, my first exposure to the character came from the 1966 show. So this one hit me right in the feels. Especially now that Adam West is gone.

Mahle’s art isn’t limited to retro DC stuff, of course. In his portfolio, you’ll find more modern takes on comic book heroes, including Marvel’s cast of characters. You can also find his take on posters for both classic and current films. Mahle has also crowdfunded his own book, Empire City, an art and design collection scheduled for release later this year.

Mike Mahle’s work can be found at MikeMahle.com. I’d also recommend checking out his Instagram and DeviantArt for his latest stuff.