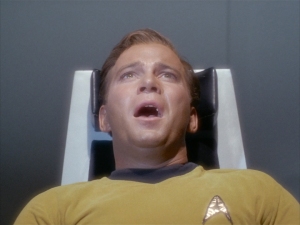 By Rob Siebert
Screwball of the Brain

So we’re taking on the prison system, mental health, and the Vulcan Mind Meld in one episode? Yeesh. Imma need some coffee…

Actually, if Dr. Tristan Adams can use a gimmick machine to plant thoughts in people’s minds against their will, I’m going to use this opportunity to use my computer machine to play with the format of “Rob Watches Star Trek“…

– If they’d done Arkham or a similar insane asylum for villains on the old Batman TV show the Doctor Simon van Gelder character from this episode would have fit it like a glove. He had that guttural shout and those bulging eyes (shown below).

As long as I’m sneaking Batman references in, Kirk wasn’t exactly Adam West with those punches he was throwing late in the episode.

– I couldn’t help but smile when Spock and Bones were inclined to believe van Gelder, despite his obvious instability. You might be hard-pressed to find someone who would do that even today. And here we have a piece of media over 50 years old. In its own special way, Star Trek really was a progressive show. Albeit one wrapped in campy and colorful ’60s sci-fi.

– That awkward moment when you realize that unlike Kirk you’d have fallen for Helen, Marianna Hill’s character, even without influence from future tech. Maybe it’s that she looks so much like an actress I worked with in a play several years ago. On the other hand, maybe it’s her weird cone-shaped bra (shown below). 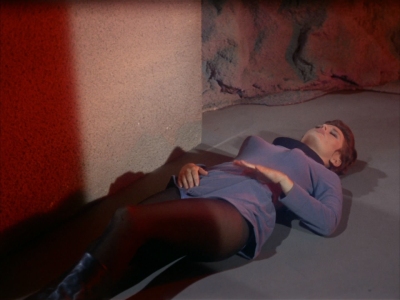 MEANWHILE, IN NOVEMBER 1966: On November 1, the National Football League awards an expansion franchise to the city of New Orleans. The team would eventually be called the New Orleans Saints.

– This episode introduces us to the Vulcan Mind Meld, i.e. the Vulcans’ ability to look into human minds. Modern television trained me to expect a flashback, perhaps even with Leonard Nimoy walking through the scene. Instead, he simply orates what he’s seeing. Obviously it’s a cool concept, though, as it’s endured for all these years.

– Speaking of Spock, he once again calls the human race on its B.S. with the line: “You Earth people glorify organized violence for 40 centuries, but you imprison those who employ it privately.”

I adore that line. It might be my favorite from the series so far, from an episode that’s most definitely my favorite so far.