DC’s decision to get in bed with Lunar Distribution is starting to feel like a mistake. Because out in my neck of the woods (the mid-west), it seems like Lunar is crapping said bed.

My local comic shop just went three weeks without receiving any product from DC. (Any DC books you’ve seen here in the last few weeks have been purchased digitally.) I’ve been going to comic shops for almost 20 years now and I’ve never see that happen. Not only is it unacceptable from a simple customer service perspective, but it couldn’t have happened at a worse time. Retailers are already being hit by the fallout from COVID-19. The least publishers can do is put the damn books in the stores… 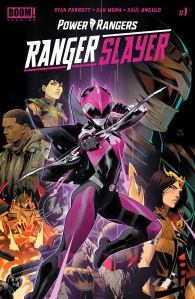 Not really my cup of tea. But if you were into Lord Drakkon’s dark alternate universe, or the “Coinless” Universe as it’s now called, you’ll be into this.

I was hoping for something more tightly focused on this alternate version of Kimberly. But the scope of this story is more about the Coinless Universe at large. Fair enough. I just wish they’d called this issue something different.

This issue gives us something I never thought we’d see, though in hindsight seems obvious for a universe like this: Ghost/Zombie Power Rangers. It was inevitable, I tell you! 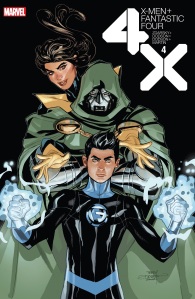 This one ends on something of a whimper, rather than a bang. Which is to say it more or less ends the way you think it will, with Franklin ending up where you think he will.

Still, the appeal of a mini like this is to see characters from different books rub against each other. X-Men/Fantastic Four does that.

There’s also a curious little scene at the end with Reed Richards that I’m curious to see if they follow up on.

We kick off with kind of a dumb “retroactive foreshadowing” scene with Batman and Alfred. “Good thing Alfred will always be here,” and all that. Lame.

It occurred to me during this issue that “Joker War” is just a sophisticated version of that New Batman Adventures episode, “Joker’s Millions. That’s not a knock. I’m just sayin’.

Now that Joker knows Batman’s secret, it’s extremely foreboding to see him messing around with movie theaters. Especially the one Thomas and Martha Wayne went to with Bruce before their murder…

Well damn. If this book is ending in September, we’re not going to get a pay-off for this Superboy Prime stuff are we?

As the book really cranks up the father/son drama with Billy and his dad, I’m struck by just how great Dale Eaglesham has been on this title. It’s clean. It’s expressive. It’s versatile. He fits Shazam like a glove, to the point that this series has become one of my favorite takes on the character. Frankly, his work with Michael Atiyeh is worth the cover price on its own.

What we get here is nice and kid-friendly. One of Billy Batson’s classmates is bragging about knowing Shazam. So Billy shows him up precisely the way you think he will. From there we segue into a fight with a villain.

Travis Moore’s Shazam looks a lot like Zachary Levi in the movie. I wonder if that’s intentional, or just how the character came out… 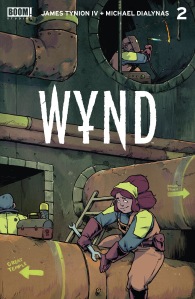 So far, this book feels a little bit like Saga for young people. It’s got whimsy and wit, but a lot less sex stuff.

After reinforcing some of the world-building they did last time, this issue cranks up the emotion with the prospect of separating Wynd from his adopted family. It’s very well done, and has me invested in not only Wynd, but his sister Oakley.

We also meet a character called “the Bandaged Man.” I really dig how he’s designed, though that may just be my love for Batman: Hush sneaking through.

This is typically the part of “Weekly Comic 100s” where I complain about John Romita Jr. So here you go: I don’t like JRJR’s art here.

I just wonder if this book is getting over-crowded with Super-people. Remember, that’s part of what prompted the original Crisis on Infinite Earths. Superman didn’t feel as special because he had too many sidekicks, cousins, stringers, etc.

At the end of this issue Jimmy Olsen says, “Guess we’re not putting out a paper today.” That line should have had a lot more weight to it. If you’re a newsman, that’s blasphemy.

A team-up between the Joker and the Court of Owls? Now that’s the stuff of nightmares.

Detective Comics hasn’t felt like a Tomasi book in awhile. There’s a certain refinement that’s missing. In particular, Batman is a little too talky for my taste.

In this issue, Batman performs brain surgery on Two-Face out in the streets of Gotham (Because why not?). The comic book science regarding how Harvey’s brain is being messed with is a little confusing. Not that I’d put too much stock in it. At the end of the day, he’s still Two-Face.

A brutally honest, unfiltered look at where our society may be going sooner rather than later. And in all honesty, a clever premise for a book. I was expecting things to get Survivor-esque right off the bat. But they’re taking the time to build to that.

The most unsettling part of this issue? Our lead villain puts his opposition (journalists, etc) into a giant hamster cage. Complete with an oversized water dispenser. The sad thing? That doesn’t even seem that far-fetched anymore.

This pandemic is really throwing a monkey wrench into my reading habits.

My local comic shop is still working on getting me issues from March 25. I’ve stayed away from digital editions, as I want to support local shops as much as possible. Ergo, I’ve been waiting two weeks for certain issues. But sooner than later, the most recent editions of Action Comics, Batman/Superman, TMNT, and others will be reviewed here.

The only new issue I purchased this week was a digital exclusive. And how could I resist? It’s the return of the DC Animated Universe! 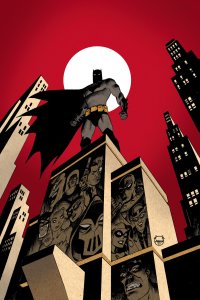 This is exactly what it was supposed to be: A return to the old form, i.e. the comics of yesteryear that were based on the Bruce Timm animated shows. Heck, they even threw in a title card, a la Batman: The Animated Series.

A lot is thrown at us here. Bane. A giant robot attacking S.T.A.R. Labs. Lex Luthor and a mystery regarding Superman’s whereabouts. But what I took away from issue #1 is that they’re going that route. A route paved by Judd Winick about 15 years ago…

I got a little lost on this one.

I came away from last issue thinking about our main character, or at least one of them, Valance. Obviously I remembered Boba Fett and Bossk were there. But I struggled to remember the significance of T’onga, why different characters were going certain places, and when certain events took place. A quick re-read of issue #1 set me straight. But obviously that’s not something you want readers to have to do. Then again, maybe it’s just me. 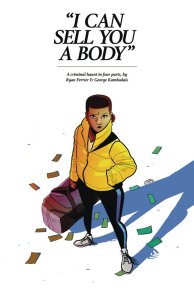 This issue unexpectedly hit me in the feels. I talked a bit about the Henrietta character last time. She’s very likable, but as a love interest, she’s all in with Denny very quickly. Not in the creepy way, either. It’s more like they just click.

It made me reminisce about the people I’ve clicked with like that. And not just in a romantic way. There’s a magic in that feeling that’s really great. So I Can Sell You A Body gained some surprising sentimental points from me with this one.

If you’ve seen the trailer for Ghostbusters: Afterlife (as you should have), you know it’s probably not an accident they saved Egon for last.

The absolutely brilliant part of this issue? Part of it is plotted based on a line Casey Kasem had in the original film. When it comes to writing Ghostbusters, Erik Burnham is a damn genius.

Along those same lines, I love the way Burnham has the other characters describe Peter Venkman’s personality. Mostly because he then proceeds to prove them right. 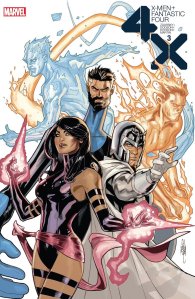 Superheroes fighting. The older I get, the less I enjoy it. Maybe it’s all the division we see in the world today. But I didn’t get a huge kick out of seeing the X-Men and the Fantastic Four fighting.

On the upside, the art is gorgeous and the colors vibrant and fun. I remain somewhat surprised at how political this book is, i.e. relations between Latveria and Krakoa. But at it’s core, it’s really the relationship between Reed Richards and his son Franklin, and how the latter’s choices will ultimately effect the world.

Captain Boomerang returns in this issue. One way or another, the band always gets back together.

Taylor still has me entertained with this more espionage-centered direction. We also learn much more about our new characters, and what exactly their agenda is.

Deadshot also has a great character moment in this issue. Or rather, Floyd Lawton does. He becomes very sympathetic, and you’re that much more invested.

This’ll definitely fill your teen angst quota for the week.

Despite being about three high schoolers finding an alien that gives them telepathic powers, what these characters are feeling is very real. In this issue, there’s lot of longing to be seen, noticed, or at least acknowledged. I think every teenager can relate to that at some point in their lives.

Chris Wildgoose has a hell of an issue. There’s a two-page spread that’s just gorgeous. He also gets to flex some otherworldly character design muscles. They come out looking pretty awesome.

It’s been written that seeing an Alex Ross take on a comic book character is like, “finally meeting someone you’d only ever heard about.”

As anyone familiar with his work knows, Ross is truly in a league of his own in terms of making these characters look real, yet keeping that awe-inspiring flamboyance that captured our hearts in the first place.

Ross has talked about at times using specific likenesses (actors, etc.) as the basis for certain characters. He famously used his father to portray Norman McCay in Kingdom Come. In the same book, Gregory Peck was apparently Ross’ inspiration in rendering an older Bruce Wayne. And as he discusses in the video below, his take on Mister Fantastic was at one time based on how Russell Johnson (the Professor) looked on Gilligan’s Island.

But even when drawing in such a realistic style, is that the way to go? As time went on, Ross would change his mind on the matter…

These days, with superhero movies more prevalent than ever, Ross finds himself in a unique position as filmmakers try to literally bring these stories to life on the big screen. While certain liberties are often taken to make them look more real, Ross remains as reverent as ever for the way these characters were originally designed…