When it comes to crying over movies, books, TV shows, etc, I’m a tough nut to crack. Until a few days ago, only one book had the distinction of making me tear up: The Giving Tree, by Shel Silverstein. I’m sure it was read to me as a kid. But as an adult? I didn’t stand a chance… 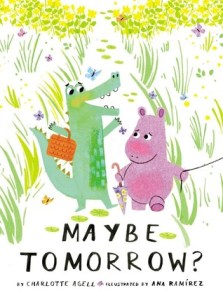 But now, The Giving Tree has a companion this regard. Last week, Mrs. Primary Ignition showed me Maybe Tomorrow, written by Charlotte Agell and illustrated by Ana Ramirez Gonzalez.

It sounds odd to call this a “non-spoiler” write-up, as we’re talking about a kids picture book. But I want to be as vague as I can be, as it’s really worth going out and reading the book yourself.

Written for readers four to eight years old, is about a hippo and an alligator. (You know, that old trope…) Norris, the alligator, is perpetually happy. So happy that he’s always accompanied by a cloud of butterflies.

Elba, on the other hand, is very sad. She’s tethered to a big black block, which stays with her all the time. Norris makes it his mission to cheer Elba up. But it’s not as simple as it seems.

We later learn that the block represents a specific kind of grief that Elba is literally carrying around with her. But one of the reasons I adore this block metaphor so much is that it can represent virtually anything. When I saw it, it instantly came to represent anxiety, depression, and Attention Deficit Disorder. But whatever you might be living with, even if it’s not a mental illness, it’s so easy to project yourself into this story and relate to this little pink hippo.

One way or another, we all have our own “big black blocks” to drag around.

Every bit as important as the block, is how the Norris character reacts to its everlasting presence. He becomes a model for how to be a friend to someone in Elba’s situation. He does all the right things.

Maybe Tomorrow? also doesn’t have a cut and dry “happily ever after” ending. It’s not a sad ending by any means. I actually found it pretty uplifting. But the book doesn’t shy away from reality, albeit through its unique and colorful veil.

This book is meant to teach children about bad feelings, and how to help someone else when they have bad feelings. But the sad truth is, there a lot of grown adults in this world who could learn from Norris the dancing alligator and his butterfly buddies.

That might be the best possible praise I can give to this, or any children’s book. It’s lesson is so elementary that even adults, mired in everyday callousness and cynicism, can learn from it too.

Here to add a little humor to your Mondays is the incomparable Betty White.

True story: I’ve actually never seen Hot in Cleveland. I may try to catch an episode next time I’m flipping through On-Demand. But this is really all I need.

Continuing on last week’s theme of humor being one of the best ways to alleviate mental illness, I present to you one of my favorite clips from The Late Late Show with Craig Ferguson. No disrespect to James Corden, but Craig was my guy…

World Mental Health Day has a special place in my heart. For reasons that, if you know me personally, are obvious. I’ve struggled with anxiety, depression, Attention Deficit Disorder, among a few other…quandaries. Quite the resume, eh?

I don’t have any sort of ground-breaking research or insight to present to you here. I do, however, have something to remind you of.

Humor is a powerful tool in the fight against mental illness. You can’t be anxious or depressed while you laugh, right? I’m pretty sure that’s been clinically proven somewhere…

So with that in mind, allow me to show you a video that makes me crack up whenever I watch it. I’m a huge Whose Line Is It Anyway? fan. So I’m constantly falling down Whose Line YouTube holes. Here we have a recent one, presented by 12Medbe. We’ve got Wayne Brady, Jeff Davis, and Colin Mochrie playing a game called Doo Wop, as Ryan Stiles watches in the background, and Aisha Tyler moderates. Turns out, even the world’s greatest improvisors have the occasional brain fart.

Enjoy and be well. Remember, this world needs you.

I haven’t talked much about wrestling lately, mostly because the WWE product sucks so bad right now. But a new YouTube video from the folks at DDP Yoga caught my eye, as it’s an intriguing intersection of my interests in wrestling and mental health matters.

William Morrissey, who wrestles under the name CaZXL these days, used to perform in WWE as Big Cass. He was abruptly released by WWE last June, reportedly due to behavioral and substance abuse issues.

As it turns out, the situation wasn’t quite that simple. 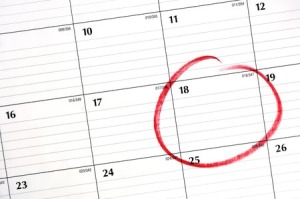 I’ve got a big day coming up later this week. I don’t always do well with big days.

One of the ways I was taught to deal with my anxiety is to try and live in the moment as much as possible. Concentrate on the here and now. This frustrates people in my life sometimes, as it often means I have difficulty planning things. But it helps me keep my cool in day-to-day life.

But sometimes, with big days, that’s a lot harder to do. I often find myself seeping back into some of my old ways.

Case in point, several years ago I got offered a job. A job that in hindsight, I really did not want. I was in a job I really enjoyed, but made less money in. But I felt I had to take it because of the money. Plus, it was in an office setting. And I fell victim to the old misconception that all “adults” work in offices, cubicles, etc.

I had two or three weeks before I started at the office job. As the time passed, I gradually got more and more anxious about what would happen to me in this new place. Would I be able to handle it? Would I get along with the people I work with? Would I somehow be exposed as a fraud and get fired? You know, all those healthy thoughts…

It got to the point where I was essentially anxious my entire day. Sleep became my only respite. Tragically, oblivion has its appeal for the perpetually anxious.

I vividly remember a family party where I simply could not calm down. It sticks out in my mind as one of the moments where my anxiety really took the wheel, and I was seemingly just along for the ride. I couldn’t escape it. Family members would talk me off the ledge, only to find me back up there a little while later.

The situation I’m in now is less dramatic, as I’ve become a better at coping with those feelings. One thing that I’ve learned helps tremendously is staying busy. Whether it’s being at work, exercising, reading, playing video games, running errands, etc. Anything to keep your mind occupied, so you don’t focus on the fear. That, and being on a good medication regimen can do wonders. At least in my experience.

So that’s what I’m going to try and do this week. No sitting around and wallowing. No laying in bed trying to sleep away the anxiety. One way or another, until the big day comes, I’m going to stay occupied. After all, it beats doin’ nothin’… 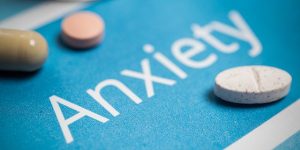 There was a point in my life where I thought I was past having to deal with social anxiety. That it was a hurdle in my mental health journey that I’d simply overcome. Turns out, not so much. One thing I’ve learned about myself this year is that my social fears and discomforts are pieces of a larger puzzle. One big ol’ mental illness puzzle. Oh, what fun.

Things have been a little emotional at the Siebert house this past year. Tensions have been high at times. Naturally, that stirs up my anxiety. So I’ve had to sort of get myself reacquainted with my social anxiety. Start acknowledging it and recognizing it again.

As a result of these changes, my medication has fluctuated. One such medication is Adderall, which I take for Attention Deficit Disorder. Supposedly, some doctors prescribe Adderall to help with social anxiety. If you’ve been on Adderall, you can probably guess why. I generally do feel more “up” when I take it.

Normally I restrict myself to half a pill, amount 10 milligrams, a day. If I take the full 20 milligram pill, it can actually make my anxiety worse. This is especially bad on a work day. But I had a decent amount of time to kill before going in today, so I went ahead and took the full 20.

I went to get my car worked on. I had my laptop with me, and I pecked away at it in the lobby until they were done. Mind you, I’m feeling pretty productive. That’s what 20 milligrams will do for you. 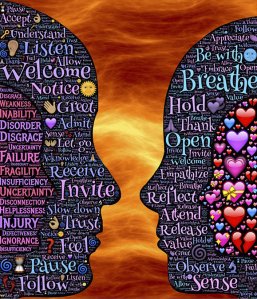 So at one point, the girl working the front desk calls me up to talk about my car. She gives me a bunch of info, and I instinctively say, “Thank you, miss.” A moment or two later, she thanks me for calling her miss instead of ma’am. She adds that while she’s from the south, where that word more commonly used, at 30 years old she’s not quite ready to be a ma’am yet.

I’m not good with small talk. I attribute that to my social anxiety. I’m always nervous about slipping up and saying something offensive, embarrassing, or worse, awkward. So I usually just nod and “Yep” my way through interactions like this. Minimum input equals minimum potential for embarrassment or awkwardness.

But here, for some reason, I say: “What part of the south are you from?” I engage. I ask a question, which prompts a response, and the interaction continues.

She says she’s from Texas. She jokes it’s the “good south.” I tell her I have a stepfather from Georgia. The interaction ends as she says my car will be ready soon. We separate.

Little moments like that? They’re huge victories for people with social anxiety. That woman probably has several interactions like that a day. Small connections. But maybe not so small, really. After all, I’m still thinking about it hours later. And would it even have happened without the Adderall? Probably not. I probably would have nodded through it like always.

I can see how people get addicted to Adderall. There are times when it’s in my system that I feel like a completely different person. A friendly person. An inquisitive person. Maybe a more successful person. 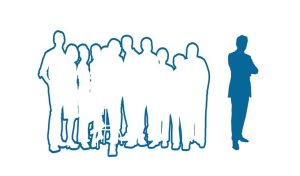 Sometimes I wonder if the guy I become when I take Adderall is even me at all. Like it’s a Nutty Professor situation. Regular Rob is bland and dull, and Adderall Rob is somehow smooth, charming and funny. In other words, My best possible self. And who wouldn’t want to be their best possible self all the time?

But we know where that road leads…

Still, I’m grateful my doctor introduced me to it. I’m grateful for the extra little moments I get because of Adderall. I suppose it’s just a matter of moderation and perspective. Because Adderall Rob is me. But so is Anxious Rob. Depressed Rob. Creative Rob. Happy Rob. They’re all me. Human beings are complicated like that.