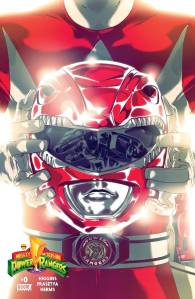 Getting attention with nostalgia is easy. Keeping that attention is hard. This certainly isn’t the first Power Rangers comic book to get my attention. The folks over at Papercutz got it, and did a decent job with the license. But in terms of keeping that attention, this BOOM! Studios series has more potential than any comic book take on Power Rangers ever has. That’s how interesting the main story in this issue is.

Will it have that effect on everyone? No. But as a life long Power Rangers geek (Power Geek?), they’ve got me lassoed pretty hard. The formula? Keep the stories kid-friendly, but tell stories that also appeal to grown-up fans with money in their pockets. On paper, that’s not easy. But Higgins and Prasetya pull it off here. 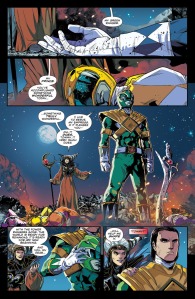 The issue doesn’t give us anything in the way of backstory. So you’re expected to know who’s who, and what’s happened previously. One might consider that a flaw, but it doesn’t effect this book’s core audience. The story centers around Tommy, the Green Ranger. While the spell that made him do Rita Repulsa’s bidding has been broken, Tommy is still feeling residual effects. He’s having disturbing visions of Rita speaking to him in his daily life. Naturally, this effects his duties as a Power Ranger, and may even cause a rift between he and his new teammates. Meanwhile Rita, as always, is up to something…

The opening (shown left) is unlike anything we’ve ever seen in Power Rangers, and it’s an incredibly smart scene to begin with. All of our heroes are down (Dead?), and we see what I assume are the remains of the Command Center in the background. For a variety of reasons, this is something we never could have seen on the old show. But the one that comes to mind immediately is that it’s too dark for a kids show. But not for a comic book like this. With only one page, Higgins, Prasetya, and the creative team have immediately sold the adult fans on what this book can offer.

Kyle Higgins is about 30, which means he was likely a Power Rangers fan growing up, and it shows. The Rangers all feel like the characters we remember from the show, even down to their dialogue quirks. Jason, for instance, ends three of his lines in this book with the word “man.” Case in point: “You okay, man?” “You didn’t listen, man.” This seems trivial.  But it’s how he talked on the show, and it goes a long way toward making this book feel like a return to the old show. 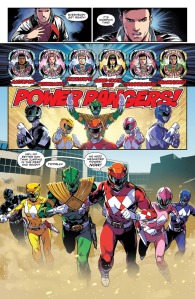 A show like Power Rangers lends itself to the comic book medium in a lot of ways. It’s a low-budget action adventure series about superheroes who use giant robots to fight aliens. The scope is almost unlimited. You can do so much on the page that they couldn’t do on the screen, especially when you consider this show was made in the early ’90s. For instance, there’s a moment where the Pink Ranger detaches her Pterodactyl Dinozord from the Megazord, and uses it to catch some cars falling from a nearby bridge. That kind of thing was really rare in the show, and again, it serves as a selling point for this series.

Hendry Prasetya delivers big time on the artwork, giving us the kind of dynamic action we’re used to from these characters and this world. It’s almost like watching a new episode of the show, but from a different angle than we’re used to seeing things. The teenagers don’t necessarily look like the actors did, outside of superficial qualities. But that’s forgivable, as it’s more important that Prasetya captures the vibe and spirit of the show.

But as good as Prasetya is in this environment, it’s cover artist Goni Montes that Power Rangers fans are truly in debt to. Rarely, if ever, have the Rangers had the sense of grandeur they have on his variant covers. The one shown above is simply the one I got at my local shop. If you’re a Power Geek, you owe it to yourself to check them all out. 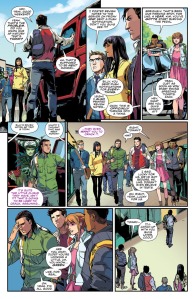 The biggest complaint I can lob at this issue is something rather subjective. Higgins brings Mighty Morphin Power Rangers into 2016 by giving the teens cell phones, and some talk about how Billy “posted review notes to the server and sent a push notification.” That’s basically extremely vague social media language. It’s not an unforgivable sin, but these are the only moments that take you out of the issue. It’s a new element to this world, which was created in the ’90s, that we have to adjust to. And it’s a curious one. This stuff doesn’t add anything significant, good or bad, to the story. So why have it? A similar thing was done in Ghostbusters: Legion, then Venkman and the guys had cell phones. You don’t need them. So why have them?

We have two back-up stories in this issue. The first stars our old friends Bulk & Skull. It’s fittingly cartoony, and sees them torturing their school principal. It ends with them setting a goal, fittingly involving the Power Rangers. We then get another follow up, where the Rangers duke it out with Goldar in what unfortunately comes off as a pretty generic fight sequence. There’s nothing wrong with the writing or the art in the second back up. But given the depth of what Higgins and Prasetya had already given us, it pales in comparison.  I almost wish they’d just given us a few more pages of Bulk & Skull.

This issue is a prelude to a story being billed as “The Untold Epic of the Green Ranger.” Considering the quality of this issue, I’m already sold on it. Considering what we got with this issue, we may be in store for the best MMPR comics we’ve ever seen. That’s a bold prediction, but it’s merited. This issue is morphenomenal!