Whether it’s one night or two, Wrestlemania only has one main event.

As much as people want to talk about various different matches “main eventing” this show, I subscribe to what I’ll call the “CM Punk Theory of Main Events.” It’s like he said on the famous Colt Cabana podcast years ago: The main event is the last match. It’s the note you leave your audience on. It’s your crescendo. It’s what you build your show toward

Like it or not, this year that main event spot belongs to Roman Reigns, Edge, and Daniel Bryan. I could have gone to Sasha Banks and Bianca Belair. Or even Bobby Lashley and Drew McIntyre. But unless a wild move gets pulled, the Universal Title Match is going to headline Wrestlemania. And based on the quality of its build-up compared to the other matches, that’s the right decision. 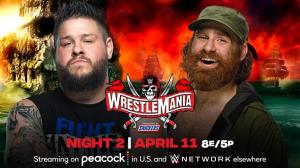 These guys have worked together a million times, and in a million places. Nonetheless, I’m sure getting to work Wrestlemania is special for them. I’m hoping they can turn in something special for Owens’ sake if nothing else. It’s not hard to see that WWE takes him for granted.

I’m proud to say I knew who Logan Paul was before he showed up on Smackdown. I have no idea how he’ll factor into this match. But he can’t not be a factor, can he?

Sami Zayn has a good thing going as a heel. So I see Logan costing Owens the match. Hopefully, Owens gets to powerbomb Logan off the stage or something afterward. 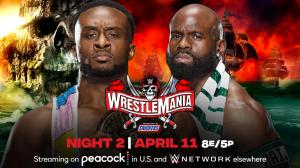 So…is Crews really Nigerian? For what it’s worth, his Wikipedia page says he was born in Sacramento and raised in Atlanta.

What’s a Nigerian Drum Fight? I dunno, and chances are they won’t know until the last minute either. So I’m not going to waste brain cells on it.

Big E. has beaten Crews every step of the way up to this point. So it wouldn’t make sense to book this match unless WWE wanted Crews to win the title. Granted, sense isn’t always their strong point. But throw in the fact that this is “his” match, and I think Crews walks out with the belt. 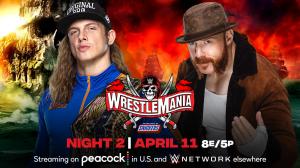 Based on what these two have turned in previously, this match has as much a chance as any of stealing this show this year. Sheamus, in particular, has been on one of the best runs of his career.

Still, I think Vince McMahon is into Riddle. They put the title on him, they added those weird CGI birds to his entrance, and he apparently didn’t get in any trouble despite forgetting his lines on Raw last week. So I’m thinking Riddle comes out on top here.

If they have any desire to make a star out of Rhea Ripley, she has to win at some point, right? She lost to Charlotte Flair last year, then she came up short in the Women’s Royal Rumble Match this year. If she doesn’t come out on top here, how do we not label her as a loser?

Fortunately, I think this is her moment. Even if Charlotte were to pop up at the last minute and make this a triple-threat, I think Rhea wins. She’s earned her moment. So let’s give it to her. 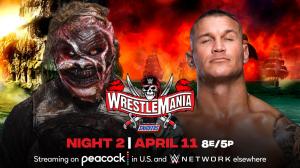 Last year, WWE had Bray Wyatt go over John Cena in what was commonly seen as an attempt to erase the mistake of having Cena beat Wyatt at Wrestlemania 30. Similarly, I suspect this is an attempt for these two to redeem themselves after their stinker of a match at Wrestlemania 33. And I think this time we get the right finish and Bray goes over.

The only question for me is how they get Alexa Bliss involved here? Because you know she’s not sitting out Wrestlemania. 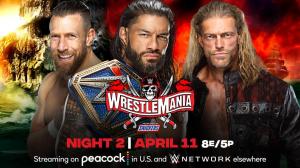 A reasonable argument can be made for all three of these men winning this match.

Edge has the classic comeback story. He was away from wrestling for nine years, shocked the world when he came back, then he won the Royal Rumble. Winning the title in the main event of Wrestlemania is a fairy tale ending, to say the least.

Daniel Bryan is the wild card. But he’s also the apparent babyface, what with Edge having taken on more of a heel role in recent weeks. The fans do genuinely love him, and having him come out on top would send a lot of fans home happy.

Then there’s Roman Reigns, the dominant monster heel champion. Since coming back at Summerslam, Reigns has been on the best run of his career. It’s been so good, in fact, that I can see him getting the win and continuing that dominant streak into the foreseeable future.

That, I think, is the path to take here. Reigns has been in the Wrestlemania main event four times previously, and each time fans vocally questioned whether he deserved to be there. This time there is no question. Roman Reigns has reached the top, and I expect he’ll stay at the top.