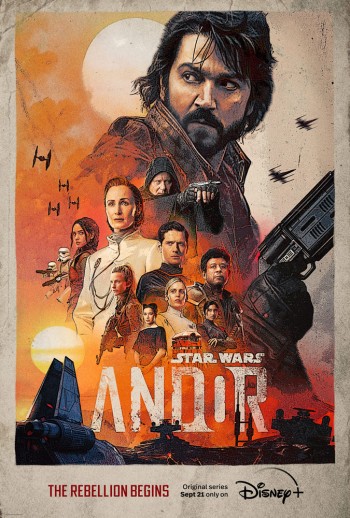 ***New around here? Check out our Star Wars review archive!***

Let me say this straight away: I did not like Rogue One, the movie to which Andor acts as a prequel. I didn’t think any of the characters were sufficiently developed. The only one with any charm or heart was the robot, K-2SO. It’s always seemed to me like people were fooled into thinking they liked the movie because of all the classic Star Wars stuff in it, along with its darker tone, which I admit does appeal to a large group of fans. But for me, a dark tone by itself doesn’t cut it. I need something underneath the dark packaging to sink my teeth into.

Disney+ premiered Andor with its first three episodes. It did something similar with Obi-Wan Kenobi, dropping the show’s first two episodes on its premiere date. Apparently, releasing multiple episodes out of the gate helps the show make a bigger splash in terms of viewership. Me? I’d be happy with a single episode premiere. It draws things out, makes the experience of the show last longer, etc. (Plus, it makes it easier to review.)

Was that an intergalactic strip club Cassian went into in the opening scene? This being Star Wars, somehow I expected more Carrie Fisher style slave girl bikinis.

We knew we were likely going to get some scenes with child-aged Cassian, or Kassa. He had that line in Rogue One about being in the fight since he was six. It looks like he comes from a world that’s not overly industrialized. The group he and his sister are in looks vaguely tribal.

I wouldn’t go as far as to say I was bored by this episode. But it did feel like there wasn’t much happening. I’ll chalk it up to first episode exposition and character introduction. But I won’t be inclined to be quite as nice next time…

Okay, I get it. Cassian has lots of friends and connections. Did we need to establish that four times? First there was the Brasso character. Then we had Bix Caleen and Timm Karlo. Then there was the encounter with Nurchi and Vetch. Finally, we had the little exchange with Pegla. Am I supposed to care about these people? The only one that really accomplishes that goal is the Bix character, played by Adria Arjona. 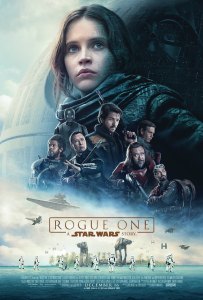 It was pretty obvious from the get-go that Rogue One was going to be a different kind of Star Wars movie. Less a space fantasy, more ground-level combat flick. A movie that puts the war in Star Wars. If we’re going to have one of these movies a year for the foreseeable future, the franchise needs to expand its boundaries. So different is fine. But what we get here is something that simultaneously does and does not feel like the Star Wars we know. That’s a double-edged sword. Or perhaps a double-bladed lightsaber.

Rogue One tells the story of how the Rebel Alliance steals the Death Star plans before the events of A New Hope. Our main character is Jyn Erso, whose long lost father develops the plans for the battle station. She is recruited by the Rebellion’s Captain Cassian Andor (Diego Luna) to help locate her father, who has long been forced into service by the Empire. Along for the ride are Andor’s droid K-2S0 (voiced by Alan Tudyk), defected Imperial pilot Bodhi Rook (Riz Ahmed), blind warrior monk Chirrut Imwe (Donnie Yen), and mercenary Baze Malbus (Jiang Wen). Together, this small band of rebels will win a crucial victory against the Empire. But the cost will be great.

That all sound vaguely familiar? It should. Like The Force Awakens last year, Rogue One is in many ways a love letter to the original 1977 Star Wars film, and there are plenty of parallels to draw. In addition to the obvious characters and imagery, Rogue One is peppered with little details, cameos, and callbacks to firmly plant it in A New Hope territory. Certain shots from the film are even mimicked once we get inside the Death Star. The plot also has numerous parallels. Our rebels sneak into enemy territory to sabotage the Empire, they dress in Imperial uniforms, there’s a droid (K-2SO in this case) manipulating things from a control room, we get a big space battle, etc. Rogue One is definitely a retro movie just as The Force Awakens was, albeit with a darker tone.

But that darker tone doesn’t necessarily help things. For so many years, a subgroup of Star Wars geeks have lamented some of the lighter elements in the movies (the Ewoks come to mind), longing for the series to focus more on the serious, dramatic, and dare I say cool side of things. To an extent, Rogue One does just that. It feels like a Platoon or Saving Private Ryan sort of movie with Star Wars stuff pasted on to it. The movie misses that sense of awe and wonder that helped make the original trilogy (and even the prequel trilogy) distinct and special. There’s nothing wrong with expanding your boundaries. But you’ve also got to remember what universe you’re in. 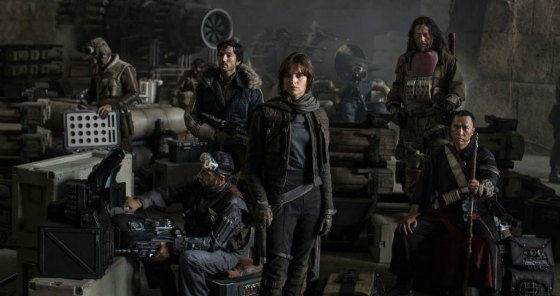 What’s more, these characters aren’t exactly the most memorable the franchise has produced. We understand their motivations and what drives them. But once you get past that, they’re not particularly likable or distinct. Our ensemble consists of about six people, so there’s not a lot of room for little personal moments where we get to know them as people. Case in point: Han and Leia arguing in the early minutes of The Empire Strikes Back. Or Obi-Wan talking to Luke about his father in A New Hope. When it comes to our main character, Jyn, we know what happened to her when she was a child, and we get some vague information about what she’s done as a teenager and a young adult. But outside of her starting the story as a cynic, there’s not much to her.

Ironically, the most charming character in the movie is the K-2SO, who isn’t even human. He’s got an Alfred Pennyworth, sarcastic butler thing going for him. Forest Whitaker’s character, Saw Gerrera, is the leader of an extremist group, and Jyn’s adopted father. His body is largely mechanical, and he needs the aid of a respirator. His dynamic with Jyn might have been interesting to explore as the movie progressed, but he’s only in the first half. Chirrut Imwe is fairly interesting. But again, we know so little about him. 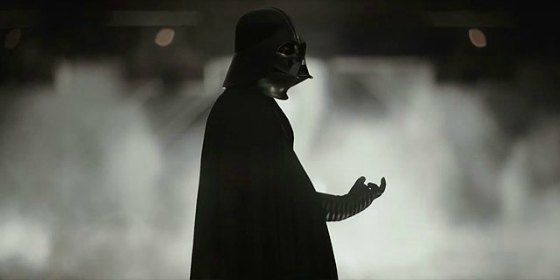 Because our main characters are fairly blasé, the classic Star Wars elements wind up serving as nostalgia boosters to keep us interested. Instead of being riveted by the story that’s unfolding, we’re looking at the stuff we recognize from that amazing movie from 40 years ago. It’s a nice recipe for warm fuzzies. Especially when we see some familiar Rebel faces, both at the base and in the space battle, two of which are played by actors from the prequels. In a perfect world, those nostalgia elements should be the garnish on top of an already compelling movie. But consider this: How appealing is Rogue One if you scale back Darth Vader’s involvement, and pluck out a few of those familiar faces?

Still, it’s fun to see Vader doing Vader stuff, especially when we get to the closing moments of the film. His entrance takes place on a planet from Episode III, which was a nice surprise. But here’s an opinion that might not be popular: The returning James Earl Jones sounds too kind. It’s like Mufasa is in the Darth Vader suit. In The Empire Strikes Back and Return of the Jedi, Jones had a fantastic growl in his voice, as if there was a rage constantly boiling under the surface. It was fitting, considering all that talk about anger, hate, and the dark side. In both Rogue One and Star Wars Rebels, he’s lost his edge. But you can’t have someone else do Vader’s voice, can you? Jones likely has the role as long as he wants it, which is how it should be. I just wish he’d release his anger… 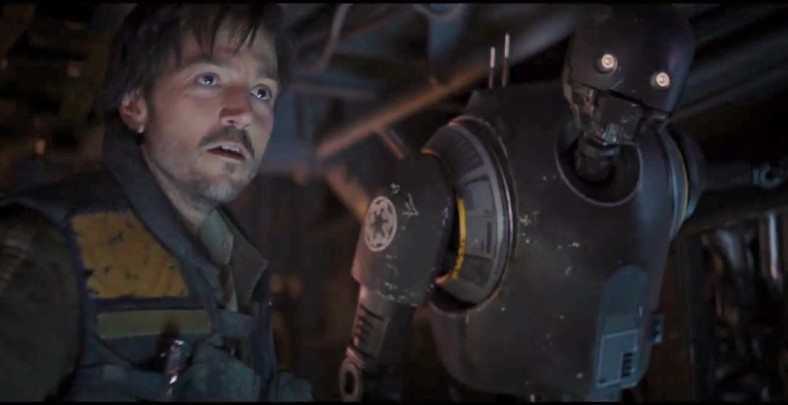 This is the first Star Wars movie that doesn’t have a John Williams score, which means Michael Giacchino has one of the most unenviable jobs in cinematic history. Imagine having to not only follow John Williams, but follow up on arguably his most iconic work. To his credit though, Giacchino pulls it off. He still has the classic Williams songs to work with, of course. But what he produces still feels authentic to the Star Wars universe. That’s a hell of an achievement, all things considered.

Peter Cushing returns to the role of Governor Tarkin in this movie. That was unexpected, considering he died in 1994. But through the magic of CGI, and the voice talents of Guy Henry, he’s back. It mostly works fine. Though I’d be curious to know what those who were close to Cushing think about this little trick. Also, does this mean the door is open for Alec Guinness to “return” as Obi-Wan Kenobi in future movies?

Rogue One makes for a decent viewing experience, with a lot of the bells and whistles we’ve come to expect from Star Wars. If you needed proof that the Star Wars Anthology idea can work from a creative standpoint, you now have it. But it may be the worst Star Wars film in terms of holding up to repeated viewings. All the best stuff in this movie was in A New Hope first. So given the choice, why not just watch A New Hope?