I maintain that this Darth Vader series doesn’t have to end simply because Kieron GIllen’s story is ending. It’s not like there’s a shortage of creators out there looking for a crack at the dark lord. Nor is there a shortage of fans that will read stories about him. Nevertheless, for now this is the end for Vader’s ongoing adventures. Thankfully, he goes out on a hell of a dramatic note.

As this series has progressed, we’ve learned it’s essentially a bridge story between A New Hope and The Empire Strikes Back. Vader goes from being in the doghouse after the destruction of the Death Star, to being in a more powerful position and obsessed with finding his son. But it’s also about Aphra, a crafty archaeologist Vader forms an uneasy alliance with. She knows Vader will kill her when she’s of no further use. In issue #4, she flat out asks him to give her a quick lightsaber through the neck when the time comes. She also asks him not to eject her into space. That scene has hung over the entire series. Like Aphra, we all knew it was coming.

I didn’t think we’d actually come back to the space ejection thing. But low and behold…

Larroca’s face work with Aphra isn’t the best here, and this isn’t the most natural looking thing in the world. But that top panel on the page at right makes the whole scene. Her body language is perfect. Then on the next page you have the simple line: “Not like this. Please, not like this.” It’s a fantastic pay off to what we saw in issue #4.

And then she lives, which was actually a disappointment. While I really dig Aphra, that’s a waste of an awesome death scene. But we’ve got a Gillen-penned Doctor Aphra book coming in December that needs its title character. That could be a great book, if for no other reason than Triple-Zero and BT-1 will be in it. Plus, after what he gave us in this series Gillen deserves to stay at the table as long as he’s hungry.

Someone I could use a break from is Salvador Larroca. He’s extremely talented, he draws an incredible Darth Vader, and he’s a very natural fit for the Star Wars universe. But it’s so obvious he draws off of stills from the movie that it pulls me out of the story. Case in point, he was obviously looking at Revenge of the Sith footage when drawing Palpatine for this issue. Perhaps the key is to put him on characters that don’t appear in the movies, a la Aphra or Sana Solo.

On the plus side, Larroca’s final two pages are very good. First, we see Vader and Luke Skywalker reaching out to each other in a dream-like scene (shown below). It’s somewhat reminiscent of the climax of the Empire duel, where Vader beckons his son to come with him. Then we cut back to reality, with a long shot of the bridge on the Super Star Destroyer. Again, much like Empire. 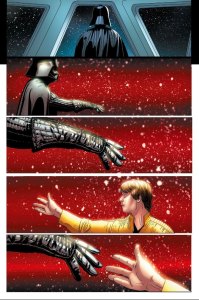 We get a bonus back-up story here, pencilled by Max Fiumara. It turns out the Tusken Raiders had a rather unique reaction to Vader’s slaughtering of one of their villages back in issue #1. The story is silent, which is a nice change. There are a pair of pages where Fiumara switches to a more storybookish style, which is a cool textural change.

One thing I found confusing: Someone who’s apparently meant to be an elder of sorts appears after the attack. The “storybook” part of the back-up recounts a village slaughter by a man with a lightsaber. Is this supposed to be Darth Vader’s attack, or Anakin Skywalker’s from Episode II? I’d like to think it’s the latter.

At one point, Darth Vader stood head and shoulders above every other Star Wars book Marvel was putting out. Over time it lost it’s must-read status, but remained supremely executed and mostly well drawn. I’m sad to see it end. Hopefully some of its momentum will carry over into Aphra’s series.

But seriously, what a waste of a death scene…